» Quick Cox Glowhead Question
by NEW222 Yesterday at 2:05 am

Back To The Beginning

Back To The Beginning

So, it has been a while now, and I got bitten by the bug again! It was approximately 26 years ago that I had started in the hobby. I had never made a successful nitro RC flight. 2 attempts with last second throttle down, followed by 2 flights in which I did take off. First ended up with broken mains that we quickly fixed, and the second was a total re-kitting of the airplane. Dad then bought me a Hobbico Sturdy Birdy II. Built it, never flew it!. This past summer, I attended a couple of rc airshows and said enough is enough! I had  sold all my nitro RC engines a long time ago to buy small electric foamy stuff (micro servos, micro receivers, and such). Well, I had recently started to buy a couple used RC engines for my needs. But, I was still missing a plane! Talked to a buddy at work and he said he had a few trainers that need bits of work on them. So I bought one from him. Turns out to be a Top Flite Sierra .40 trainer. Nothing major  to be repaired. A couple small cracks here and there, patch up the covering with some clear packing tape, clean, repair, re-inforce, and re-install the firewall. Had a Spektrum AR500 receiver, and got a few used S3003 Futabe servos to install. Landing gear is on its way to me and should have it next week. Fixed up the broken engine/nose wheel mount. As for engine..... I will be flying an old Enya .35 RC (Model 5224) engine in it with strap on muffler. Hopefully it will haul this bird up. The only problem I had encountered with the engine was a small chip missing on the top of teh exhaust flange that I had used JB weld to fix, and the fact the needle was too short to turn when in the plane. That I solved with a small piece of dowel with hole in the center for the nub on the tip of the needle. Once I got that I used a piece of heat shrink and seems to be holding out just fine! So once I get the landing gear and install it, I will update my progress. With winter type weather quickly approaching, I may not have a chance to try flying this year. Either way, my plane will not take to teh skies as the club I will be joining has a club trainer to learn on. Here are a couple of pictures the way it sits. 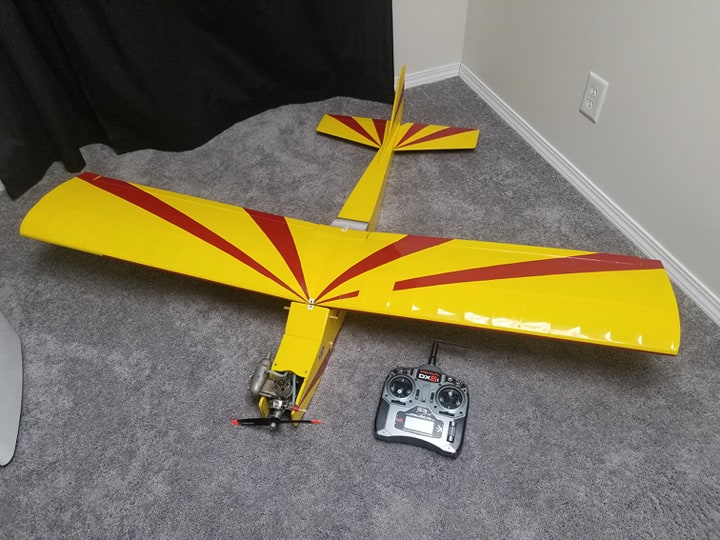 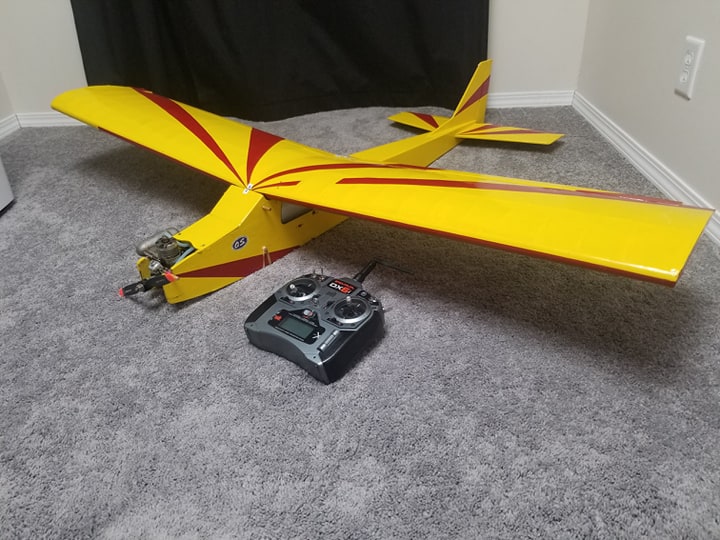 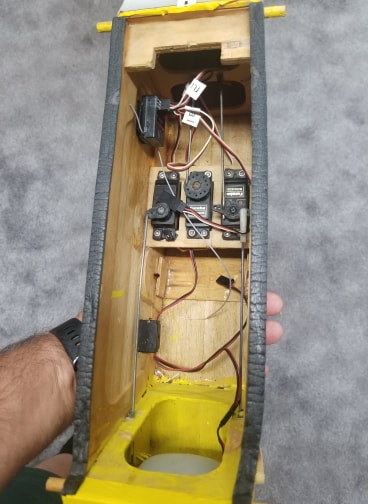 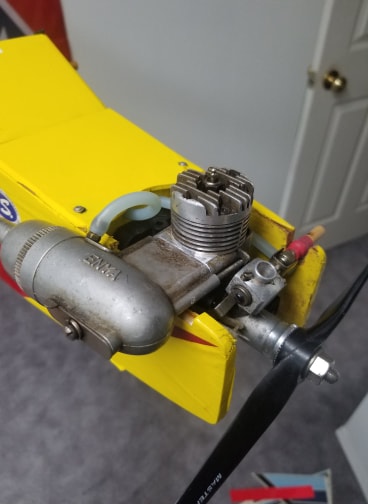 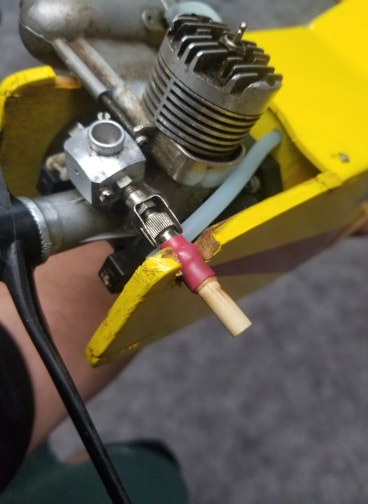 Nice airplane Chancey, Reminds me of a Falcon 56 and my Sterling Fledgling. You ought to be able to float that plane around the air quite well. Not much work there to be done and I like the covering scheme.

Nice looking trainer Chancey , Is the engine broken in ? Don't feel bad i have a plane i built over 20 years ago and still havent put it in the air , has a brand new OS 40 on it .

Sounds familiar. Purchased a brand new MRC Hawk Trainer with Enya .15 engine. Has been sitting in the box for the last 40 years. Purchased a 3 channel for it at the same time. Only problem is that it is 49 MHz. All purchased from Tower Hobbies back then.  Looks like the image below.

Let us know how the trainer experience goes. 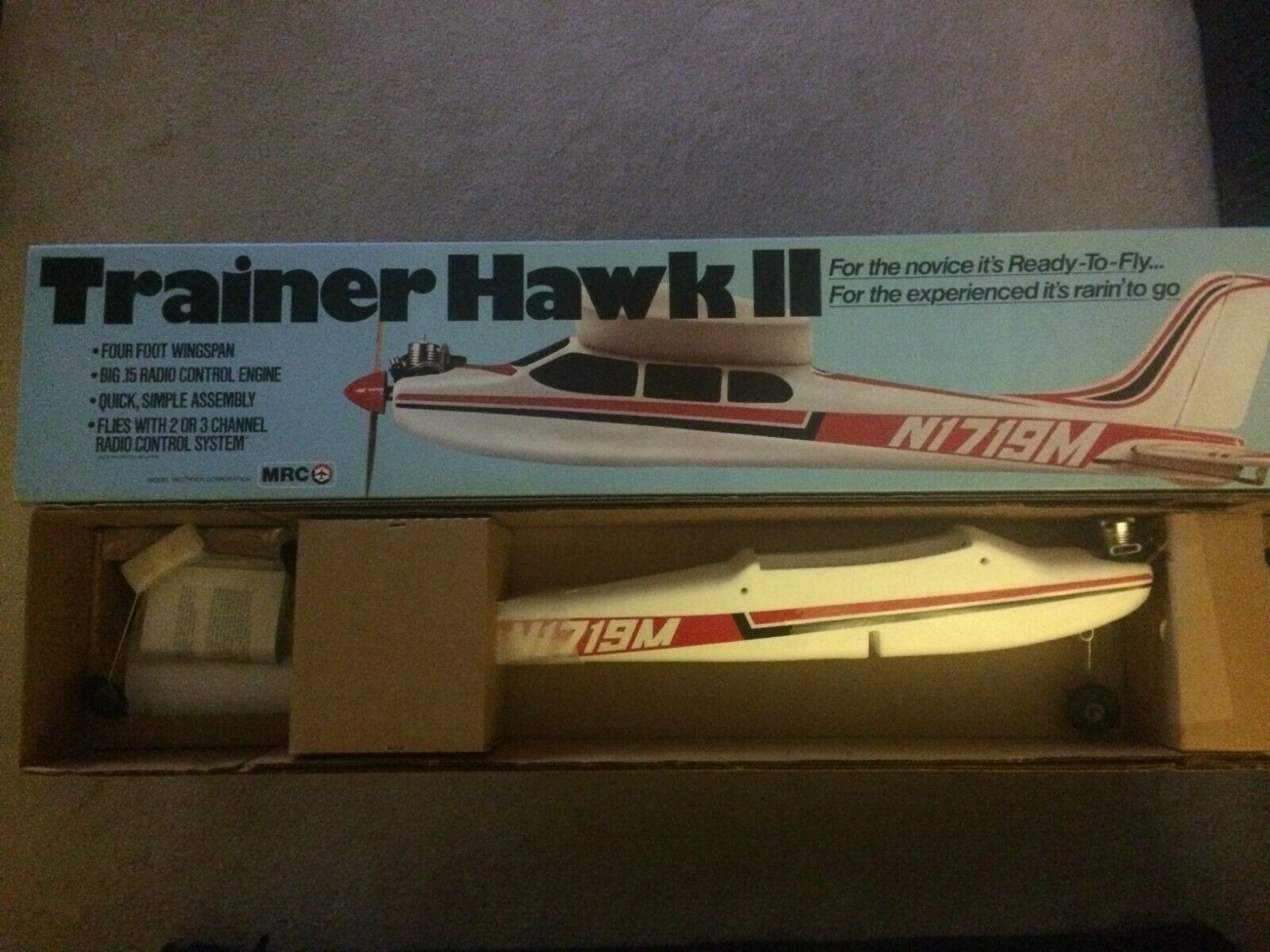 Is the engine broken in? Well, that question is hard to say with 100% certainty, but judging by the burnt on castor and how dirty it is (from running), I would venture a guess and say that yes, it is broken in. I did run it only once so far, and it did seem to run rather well. However, this was using Omega 5% fuel. I do know that it should be run on fuel with a bit more castor, but that is all I had at that specific time. I will be making a quart of fuel specific for it at a time with added castor that I have. It is honestly hard to find and or get castor oil here other than the pharmacy, but I do have just over a pint left of castor, so should be good for a while.

And also, yes, I will post progress as I start flying. Unfortunately, this year looks like it may be a bust as the weather is taking a turn for the worse quickly! But, if I do go out, I will let you all know what I crashed, I mean flew...

To bad Chancey, I was about to make you an offer that you couldn't refuse for that engine

@rsv1cox wrote:To bad Chancey,  I was about to make you an offer that you couldn't refuse for that engine

D'oh! Hmmm. What model did you want it to be again?

@rsv1cox wrote:To bad Chancey,  I was about to make you an offer that you couldn't refuse for that engine

D'oh! Hmmm. What model did you want it to be again?

A little grinding and some really small plastic numbers ca'd on and we're in business.

I bet that Enya will really haul that plane around Chancey. I would pull it first and bench test it. Waiting to hear all about it.

I had run about 2 - 4 ounce tanks through it, and it seemed to run nicely and steady. That is when I ran out of fuel at the lake so I had to stop. Also to note, after running it there, I brought it home and noticed a small bit of silicon on the top of the exhaust area that I wanted to clean off. So, I pulled it off and it did come off nicely, only to find that there was a small 'chunk' taken out of the upper exhaust flange/mating area. So, I cleaned teh area with alcohol good then used my Dremel with a stone to rough up the surface. Cleaned it with alcohol again and with an aluminium tape backing I filled teh area with JB Weld. Let it sit a day then carefully filed the JB away where it did not need to be, and also filed the mating surface very close to even. I then used 220 grit sandpaper on my sanding bar to make it smooth and flush using a Sharpie marker as a guide. I also did the same sanding to the 'rough' muffler. After all was said and done, I cleaned it one last time and applied a single layer of the tin tape to the engine, trimmed it to fit and will use that as a 'gasket' to seal it in case of any minor imperfections. Area that was fixed is circled in red. I hope it holds, but if not, I am not too concerned as it did run well before the repair. 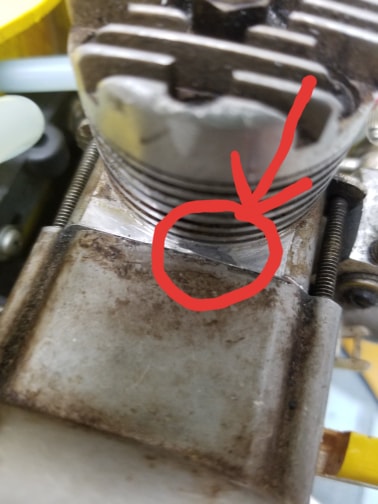 And just another little update with the landing gear. The gentleman I bought teh gear from said that he will be shipping teh landing gear and wheels out tomorrow. Glad I actually bought it from him. My LHS said that teh 5/32" steel would be in late last week. Never stopped in there due to being busy and such, but did stop in there today on my way home from work. Still not in, and was told it will be in late next week now. By then, I will already have my 'new used' gear installed. I will have a couple of modifications to do to it as the original went from the wheel up through 2 holes in the engine mount, and ended with a wheel collar just on top of the engine mount. The lower hole, however, was broken so I fabricated a metal bracket and screwed it to the engine mount to capture the front gear. The new nose gear I will be receiving is too short to make it all the way up, so he included a nosegear bracket that I will install below the engine mount and the nosegear will go through that and into the lower hole only. Should not be a problem. And, just a picture of my engine mount with lower gear area repair. 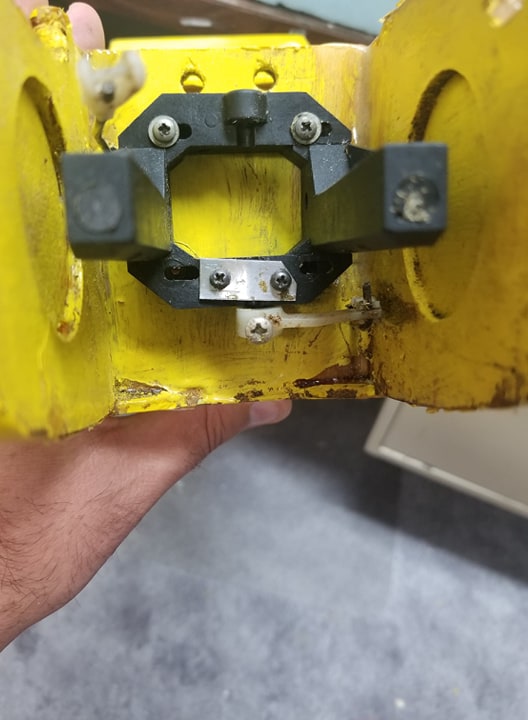 Despite my trick photography, the engine mount is honestly straight, and the other two screws were placed in after the picture. I have no clue how the picture turned out looking like this.

That's a common fault and repair on Enya engines Chancey. I have done several as you describe and a couple more left to do. I don't know if it's just Enyas that are susceptible to this or not, perhaps because I have so many of them the odds are that I will find a few. 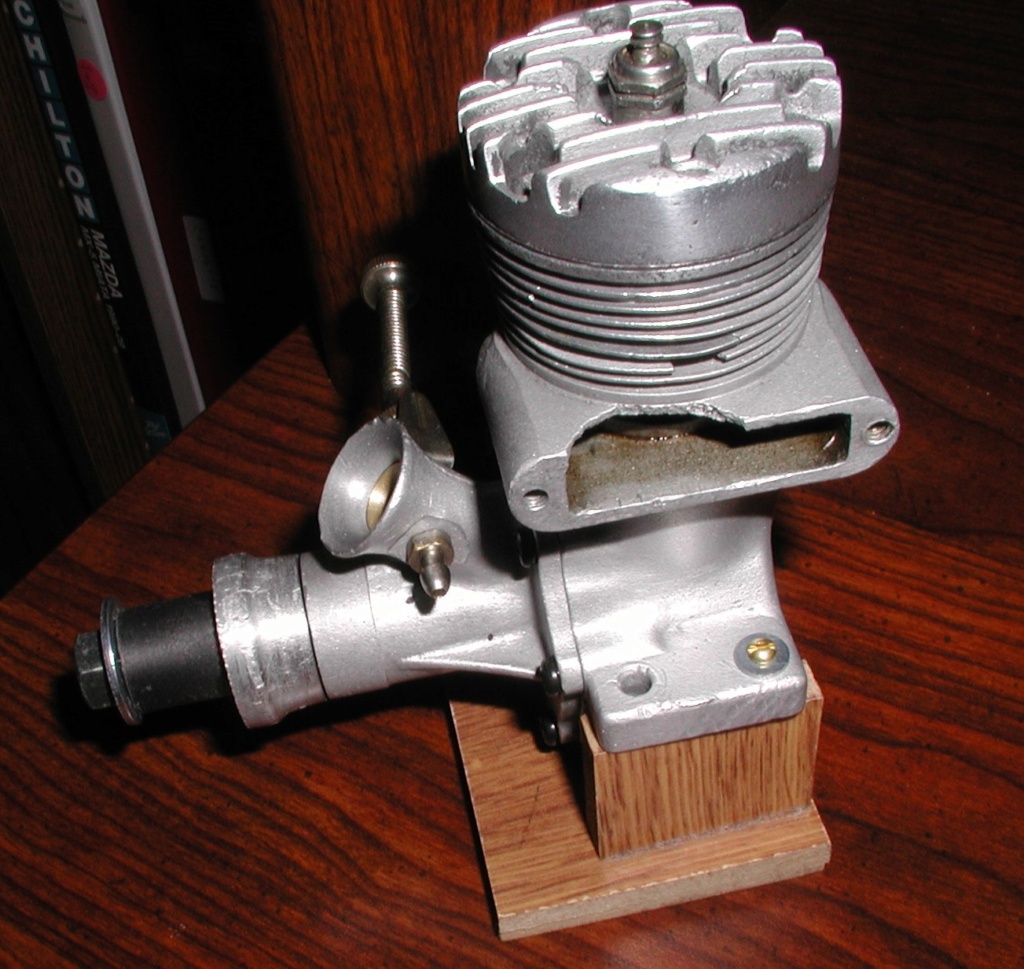 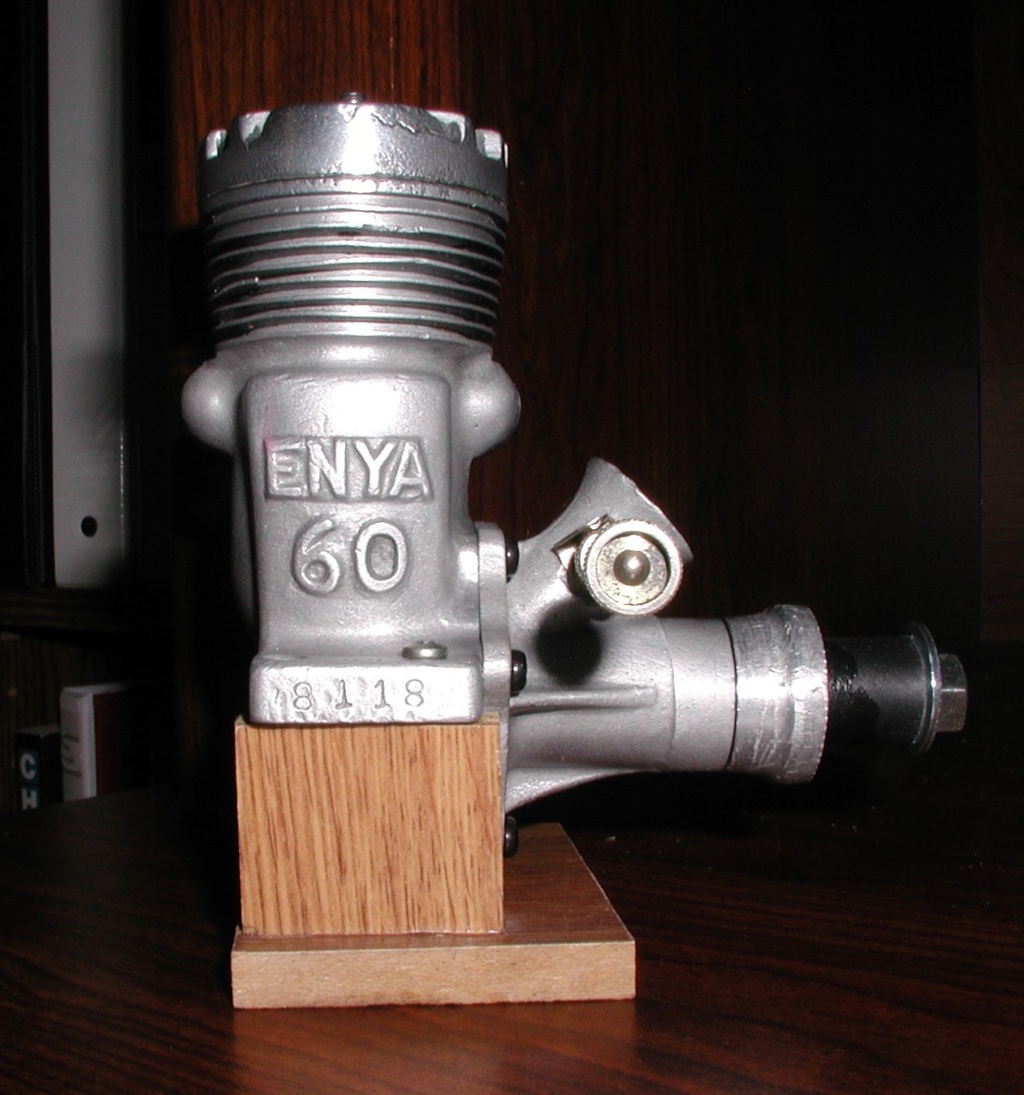 Maybe their cases are just brittle, but none of my other engines suffer from that sort of damage.