Log in
Search
Latest topics
» A couple of things, and a story
by rsv1cox Today at 1:47 pm

» Keil Kraft Phantom Scratch build from start to flying.
by Woody Today at 6:21 am

» Building a gas powered windmill to cool me down
by davidll1984 Yesterday at 10:59 pm

» What I did today
by GallopingGhostler Yesterday at 10:52 am

» Logging again
by Woody Yesterday at 8:07 am

Here's another project that I think turned out pretty well. I had decided to build a Lil Jumpin Bean, and was reading the posts about the plane here. Someone mentioned that it was basically a half size rendition of the Goldberg Shoestring. Well, I printed the Shoestring plans at 50%, and the wing was an exact match. The Bean's tailfeathers were slightly bigger. So, I went ahead and cut a fuselage and vertical tail from the Shoestring palns, and a horiz. tail & wing ribs from the Bean. I did change the wing structure to make it build lighter. 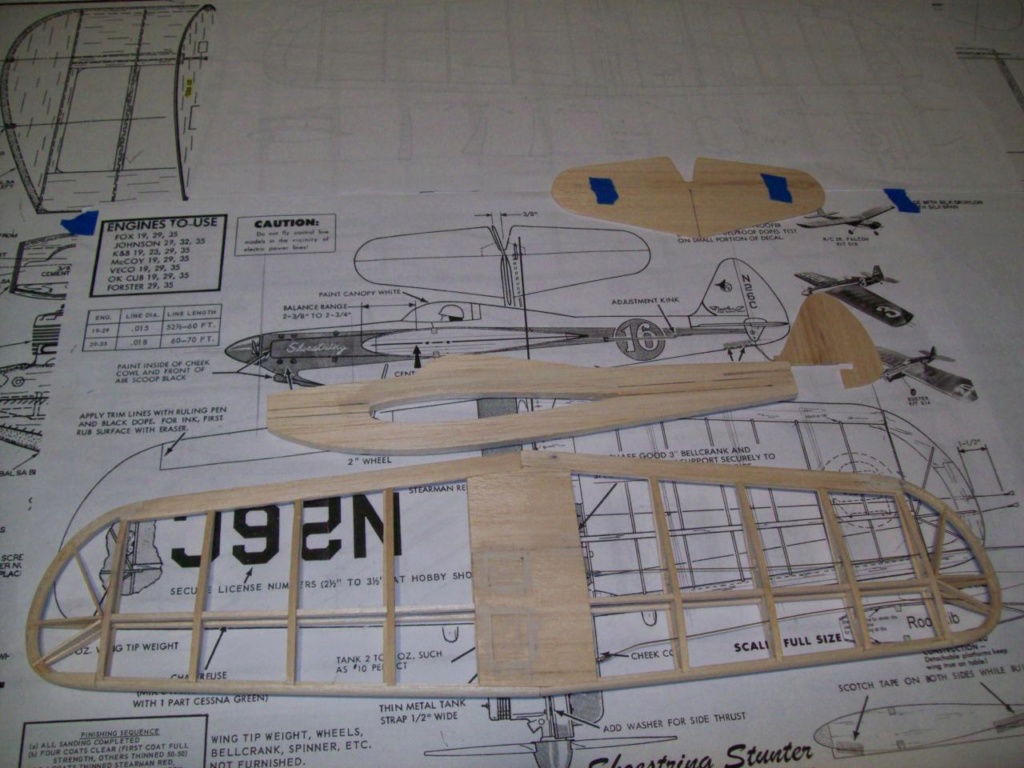 Here is the finished product. Weight came in at 5.1 oz. Power is a well used Golden Bee. Covering is Monokote, and the markings are also cut from Monokote. 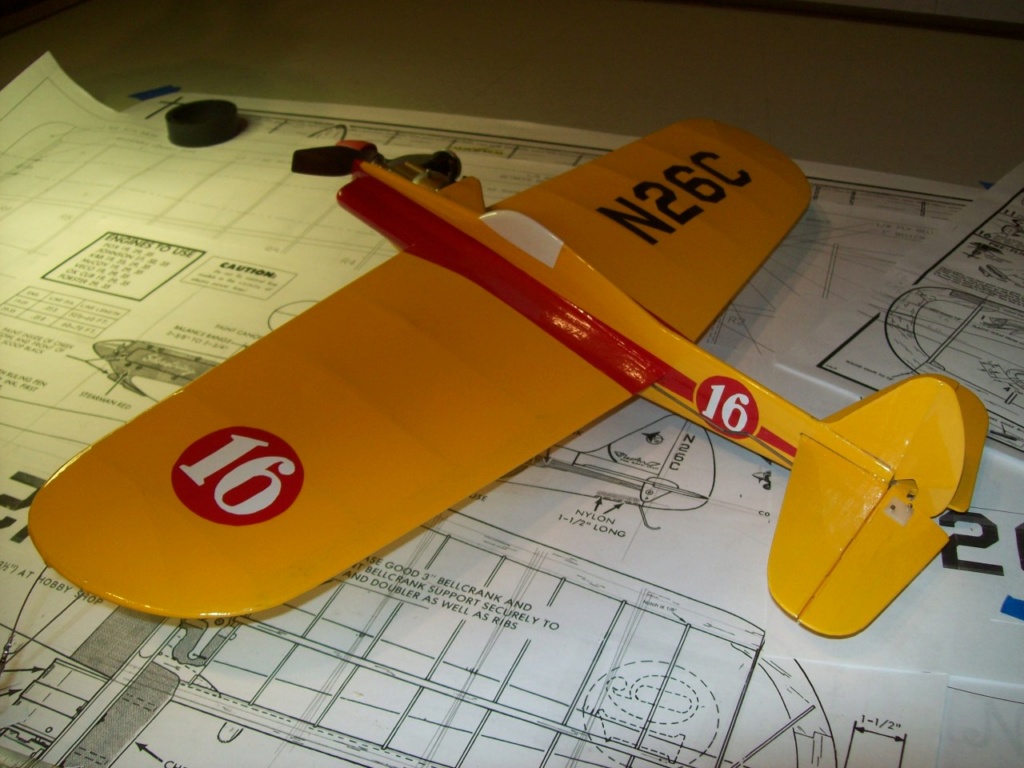 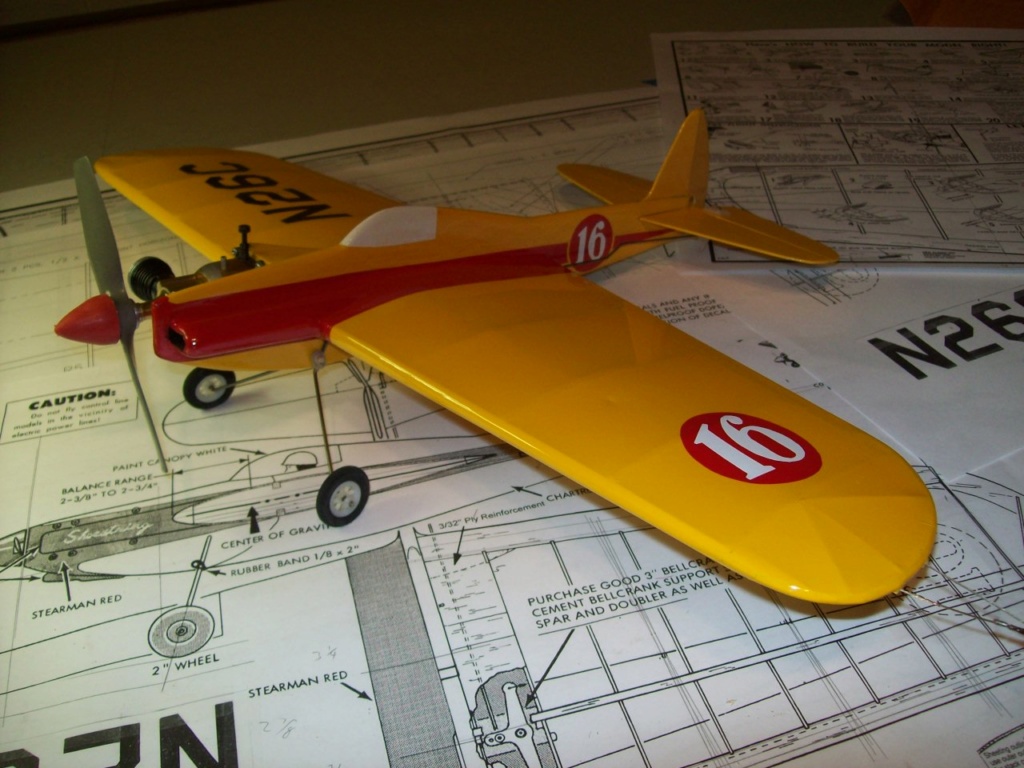 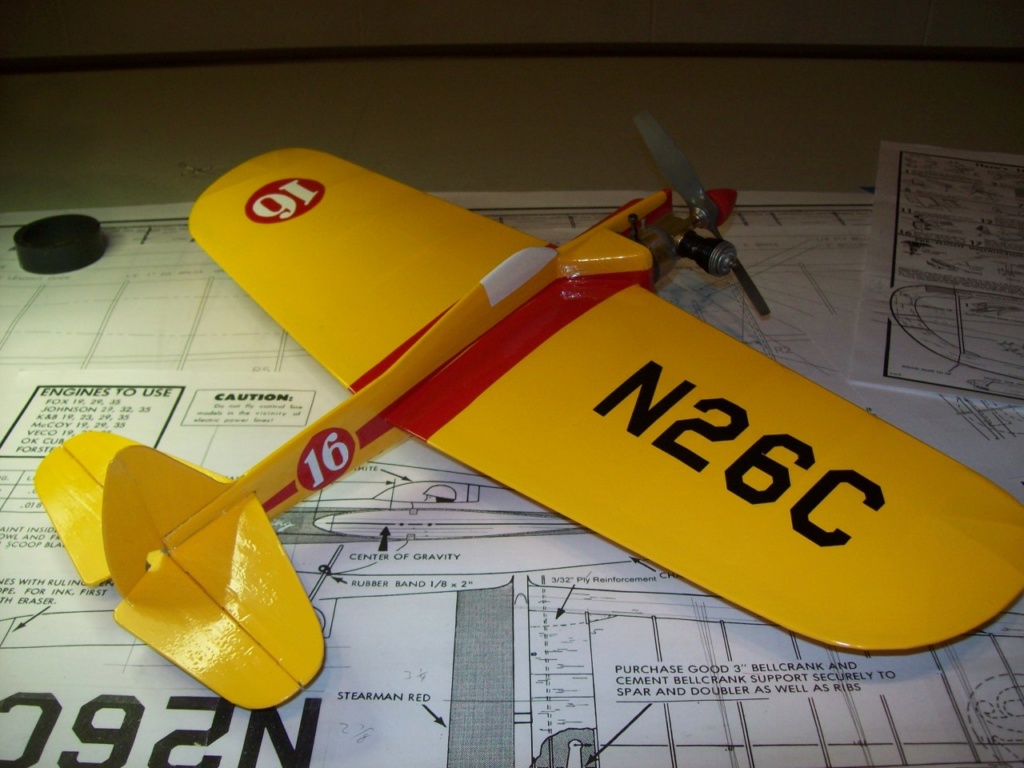 The plane has been sitting all summer, I just flew it last weekend. By the way, Rusty's sleeve launch idea is genius! A carpet scrap, a brick, and the tailgate of my truck were all that was needed. Bonus points for not having to get down on the ground to start the engine.

The airplane flies wonderfully, but I never got a good run out of the Golden Bee. A teardown, cleaning, and new gaskets should get that sorted out.

Well done duaneh. Nice looking build. I must mention, I always wondered about having the engine set off the centreline of the fuse. With it outboard, I always suspected that the plane would come in to the circle due to greater drag inboard of the thrust line. Since yours flies so well it seems it may not matter as much as I thought.

That is nice. Now one at about 23" to 24 " with a Medallion would really put the purr in the puss.

Well. I must say that you have a great looking plane there, and honestly a very good weight too. Glad you had a chance to finally get it airborne.

Rod, I was a bit concerned about the offset thrust line myself, but I have seen this technique used successfully before. In this case, I wanted to preserve the forward fuselage and cheek cowl.This seemed like the best way. Also, there is no right thrust used. I knew the sleeve launch would tell the story, as it puts the model in midair with zero airspeed. I needn't have worried, as it accelerated straight forward, losing maybe a foot of altitude in the process.

Duane, I love it! And it never occurred to me that the Bean is a baby SS, but you nailed it. I also agree with your decision to go with the Bean's bigger stab. And I like Tico's idea that a Medallion would be a perfect match for the airframe.

You can see in my avatar what I made from the last remaining scrap of my Bean.
Here's an action shot:
https://youtu.be/RobymeDXZkc
Can you tell which part is original Bean, Lol?
It weighed about 6 oz because its new beam-mount nose is made of birch plywood, plus I extended the wing's chord by adding fixed "flaps." The Big Mig .061 was stupid fast, at least back then before Mike Londke put a 1/2A combat Gladiator(also by Brodak) in my hand.

Very Nice !! Did you make the cowel or kit piece ? Looks really good , would love to see it fly after you get the GB straightened out

No kits were harmed in the making of this model.

I downloaded the plans from Outerzone site. The cheek cowl is just some balsa scraps, glued up and sanded to shape.

Wow Rusty, your hot rod bean is fast. No way would I be able to fly it.

duaneh wrote:No kits were harmed in the making of this model.

I downloaded the plans from Outerzone site. The cheek cowl is just some balsa scraps, glued up and sanded to shape.

Wow Rusty, your hot rod bean is fast. No way would I be able to fly it.

Duane, I keep coming back to this thread just to look at your plane, I love it.

As for the Refried Bean, I bet you could fly it, you just have to work up to it. It has enough authority to stay tight on the lines and not scare you with slack-line loss of control. And that authority also allows you to stop turning, plant your feet, and do as many lazy 8s as it takes to recover from dizziness. That line set was made of 45 foot long Spiderwire, and I don't recall the wingtip weight, but I'll take a look next time I'm in the shop.

In the YouTube comments, I mentioned that I later changed the prop to a 5.5"x3", meaning the video flight was flown with a 6"x3" Master Airscrew That is the reason the engine was bogging in the hard corners, and I just didn't know what the heck was happening back then. I later learned that with a pressure bladder, a small air leak at the venturi stack wouldn't matter so much... My brain was still thinking in "suction" induction back in those days when Ken Cook and Fit90/Bob Milbert were trying to teach me and my numbskull otherwise. So it turned out that the 6"x3" was just way too much lumber for the Big Mig .061 to swing in this C/L application... as opposed to what NV Engines claimed. NV was a bunch of Doofuses(and I mean that in the nicest way, Lol) when it came to high performance Control Line, Lol.

In the YouTube comments, I also wrote that the 5.5"x3" MA prop ran faster without nearly as much bogging. True enough, but I finally settled on 5-1/4"  and 5" props for peak engine performance. The only 6" prop I like to use on a performance 1/2A engine is an APC 6"x2." It's very efficient, allowing the engine to spool up to its sweet spot RPM range, yet taming the flight to a manageable speed.

Duane, I apologize for hijacking your thread to blab all about my own plane. Writing flight reports was always my favorite thing to do on the forums. But since being grounded by the flight surgeon for the last couple of years, I'm living vicariously through y'all's adventures as well as my own videos. This is one of those times I get carried away with rehashing old material, but I hope it's interesting to someone who wants to learn how to fly with wild reckless abandon... and at least I don't bust as much balsa talking about it as if I were really flying.

I had been flying 1/2A since I was about 12, but never bothered with loops and all that fun stuff. When I found the forums, like RC Groups and CEF, I figured it was about time to earn some new tricks. So I bought the Li'l Jumpin' Bean solely for that reason... to learn how  to fly loops and stuff... well, mostly figure 9s, Lol. But hey, I finally got the hang of it, as can be seen on my Tube channel. So here I am, cluttering up y'all's threads until I get my legs back under me hoping to get back into it.

Coincidentally, the first "big" plane I had was a Goldberg Shoestring. When I outgrew the churchyard across the street, clipping the tips of the oak trees with my 45' lines, I had to join a local RC club. one of the members wanted to introduce me to something bigger than 1/2A, and we met up one day out at the Fort Jackson club field to fly his old Shoestring Stunter. But he wrecked it on the first flight and sent me home with a sack of yellow balsa, minus the engine and tank. One thing led to another, I found out people competed with these big ol' things. I met Wayne Robinson in our club, Ken Cook on the forums, Marvin Denny on the phone... next thing I knew, I was a beginning "Beginner" Stunt pilot. My, how life changes.

Well, I can't speak for Duane of course, but I always enjoyed both your flights reports back then, and your current notes.

Rusty, feel free to jump in anytime. Your commentary is always welcome, and can only help the thread.

I started flying at about the same age as you. Went from plastics to balsa to larger planes. A SIG Akromaster with a Fox .15 was my first "big" airplane. It was an eye-opener after the .049's. I got out of flying about the time I got a driver's license. You know how it is....

Now I'm into my second childhood and having a ball!