» Anyone catch this Testors BD-5 last night on ebay?
by rsv1cox Today at 7:38 am

Here's an article I've had for twenty years or so, the subject hardly ever comes up it seems, but cleaning the build-up off of pistons is huge when it comes to performance.

If your engine has not been running as well as it once did, not holding a needle setting, sagging at full power when you know it is not overly lean, dies on climb out a little after launch, yet it has good compression and no air leaks, you may be suffering from an attack of Old Man Varnish.  This Old Man gets you when the engine is hot because the varnish softens under heat and tends to grab the piston, sort of like a heat activated glue.

He especially likes to attack small .049 size engines, but can really reduce the performance of larger ones. Varnish forms due to the heat and agitation in our engines which causes the castor oil in the fuel to break down into varnish which primarily coats the cylinder walls, and to a lesser extend the piston skirts.  Old fuel which has absorbed some water and flying in damp weather accelerates the process.  Please don’t take this as a vote against castor as a lube—I think the best of both worlds is castor as 3 to 5% of  the total fuel volume with synthetic making up the remainder of the lube content.  However, models engines seem to be a great place for making varnish.  I read one article that said the conditions in our engines is very near that used in factories to make varnish: heat, compression, agitation and spraying through small orifices.

DO I HAVE IT?
Run engine full throttle on ground. Peak the needle for normal flying full power.  Tach soon as it comes to full rpm, then again after it has run for 60 sec or so.  If you have lost more than a couple hundred RPM after the engine is at full temperature , or you hear a noticeable sag in RPM, then you are a likely victim of OMV.
1/2A engines often just run sick, changing the head/plug, fuel, adding head shims don’t help, engine seems to always go lean after a few seconds or a minute of running, and even quits.  Look in the cyl—when it is bad you can see a yellow/brown glazed look to the bore.
Especially on larger engines you can be losing 500 rpm and never notice it.  So for weekend warriors, clean once a flying season/6mts, and for 1/2A’s after each quart of fuel, or when it gets sick.  Remember old fuel and flying in wet weather makes the problem come on much faster—sometimes in one run for a 1/2A.

QUICK AND DIRTY FIX
Pull head on engine and hold inverted during entire process to keep foreign material out of the crankcase.
Wrap a blob of  #0000 steel wool (any hardware store, paint section) around a dowel (notch the end to grab the “wool”),  say twice as large as the cyl bore.
Push dowel and SW into the cyl and rotate—you want it to fit tight, be moderately hard to turn.  Try for uniform coverage top to bottom with piston at bottom of stroke.
Pull out after 8-10 turns.  If the outer part of the SW now has a tan/yellow cast you have hit pay dirt—that is the varnish!
Continue to apply until cyl is bright/clean.  Do not try to remove metal, just do until the initial dull appearance is gone.
Wipe out the cyl with paper towels or rags until no more bits of SW come out
Flush/spray out with Brake Cleaner (any auto parts store), or what ever solvent you have until piston moves freely (do not force piston). Keep cleaner off paint/dope—will remove.
Replace head and enjoy restored power.

FULL TREATMENT
Pull engine and take out piston and cyl/sleeve.
Use SW as before in the cyl.
Rub sides/skirts of piston with steel wool until it is bright.  If a ringed engine, only remove rings if they are sticking in the ring grooves, and then you would be best off to replace them with new rings after carefully removing the varnish in the grooves with a small dowel and SW.  Do not round the edge of the ring grooves or scratch their sides.
Again, use only until dullness is removed.  Be especially carefully with an aluminum piston.  Some discoloration will remain in the “grain” of cast iron pistons.
Wash with detergent and hot water, dry with heat gun, oil  and re-install.

DO NOT!
Use any kind of sandpaper or abrasive—you will remove metal—premature wear on the engine.
Leave steel wool residue in the cyl/on the parts.  Trying to run the engine with these bits of foreign material will damage the piston/cyl sealing area at the very least.
Use excessive force, especially on aluminum parts.  You only want to remove the varnish, not metal.

Thanks, I have a few engines with what seems to be this very problem - good compression and running well on the bench, but leaning out, loosing needle settings or outright dying in a climb, failing to burn out the full tank, etc.
I will give one a test clean as described in the article. I think I'm going to use the steel wool, as there's a plethora of different products branded '3M scotch brite', apparently with different grits, so that seems risky.

Some may remember in the not to distant past when I was buying a lot of used (worst of the worst) glow engines and posting about them here.  A couple hundred or so, mostly Enya's and Cox engines but others too.

Many had nasty varnish coated bores with a crust build up at the top of the cylinder.  After a A/F boil in the crock pot my standard routine was to do just that, wrap some fine steel wool saturated with a light oil around a dowel and lightly polish the cylinder.  The Enya's turned out especially well.

Now to prevent varnish buildup after I run an engine I flush it out with Remoil spray while rotating the prop in both directions then blow out with compressed air.  Tends to prevent future castor lock too. 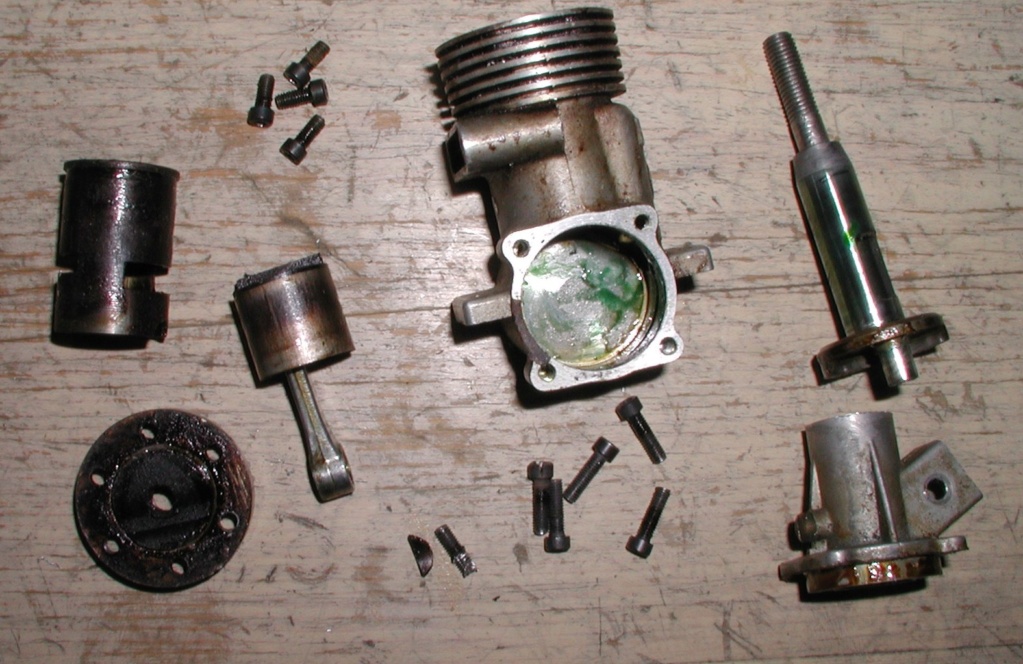 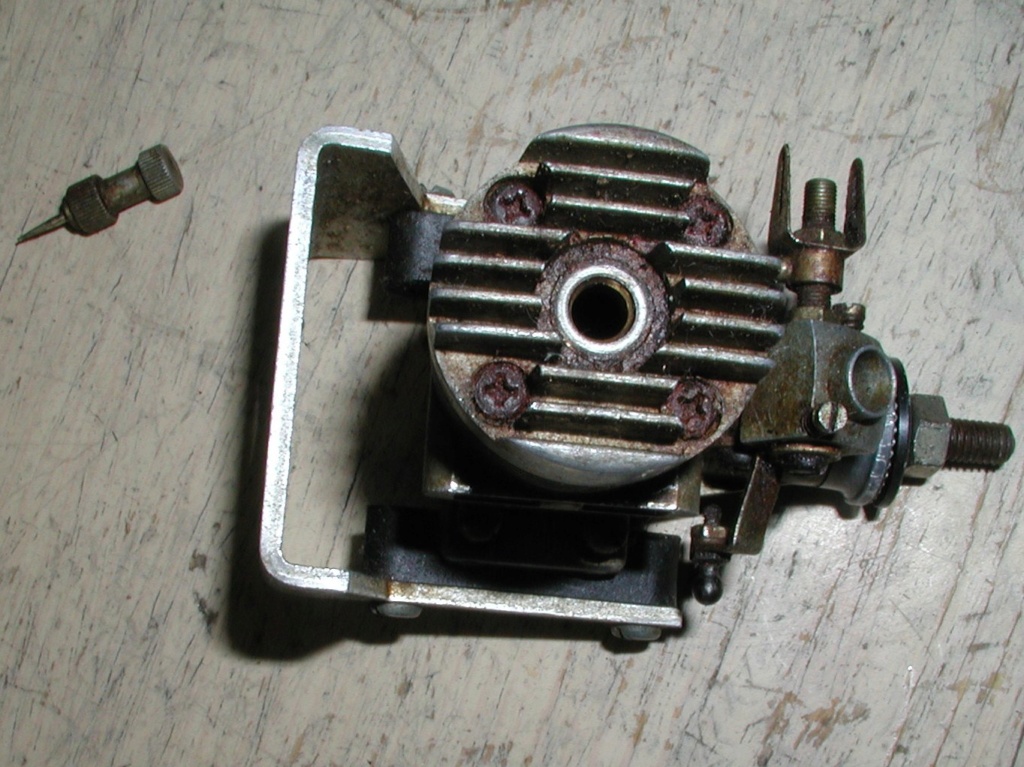 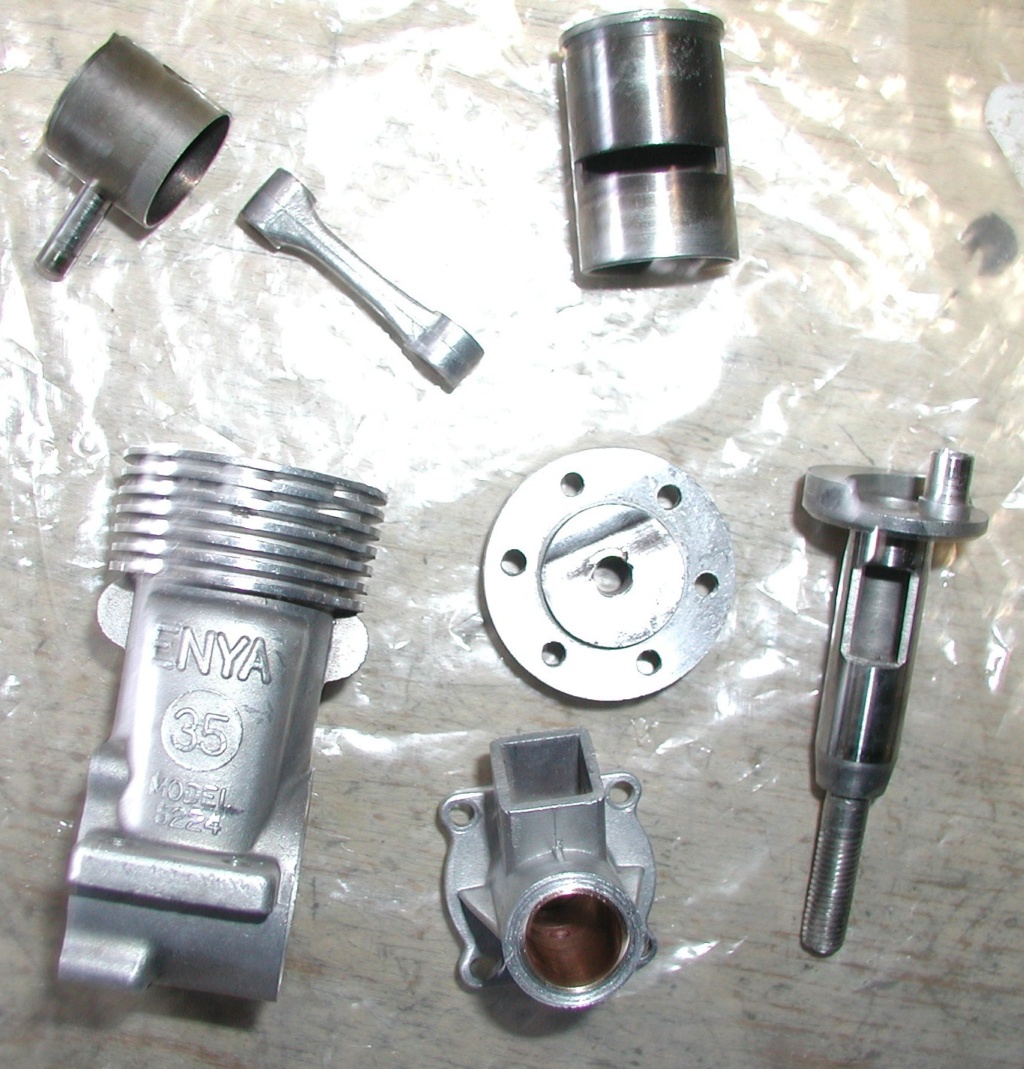 Beautiful restoration, Bob..the piston had the castor burnt on its side before the clean-up, indicating a probably already lose fit between the cylinder and piston walls, allowing blow-by of gases..how is the compression of this Enya after the restoration?

@balogh wrote:Beautiful restoration, Bob..the piston had the castor burnt on its side before the clean-up, indicating a probably already lose fit between the cylinder and piston walls, allowing blow-by of gases..how is the compression of this Enya after the restoration?

Hard to tell Andras, I did so many. 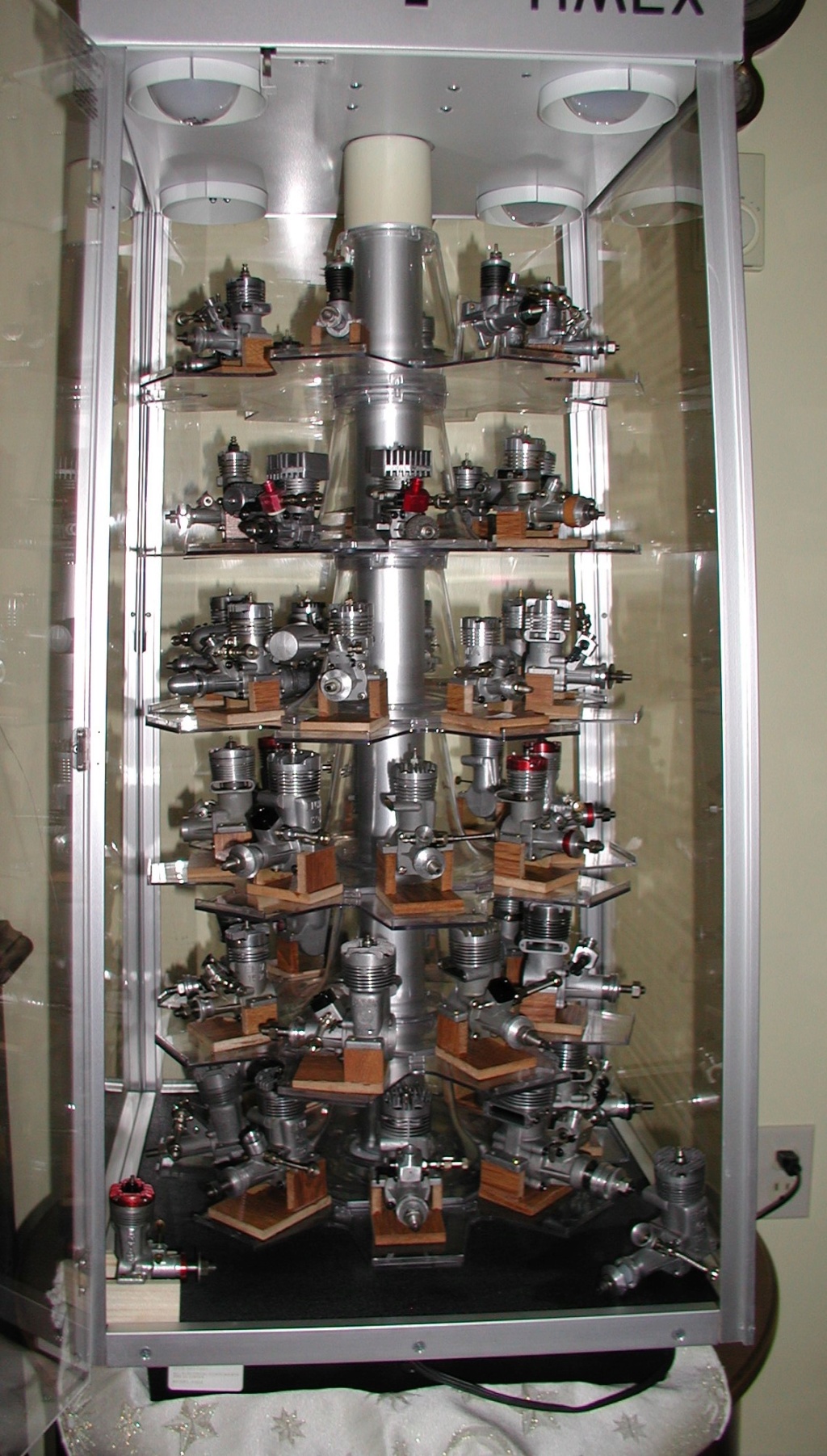 I just grabbed three photos.  But I think this is the completed engine.  It has the scar just below the "Model". 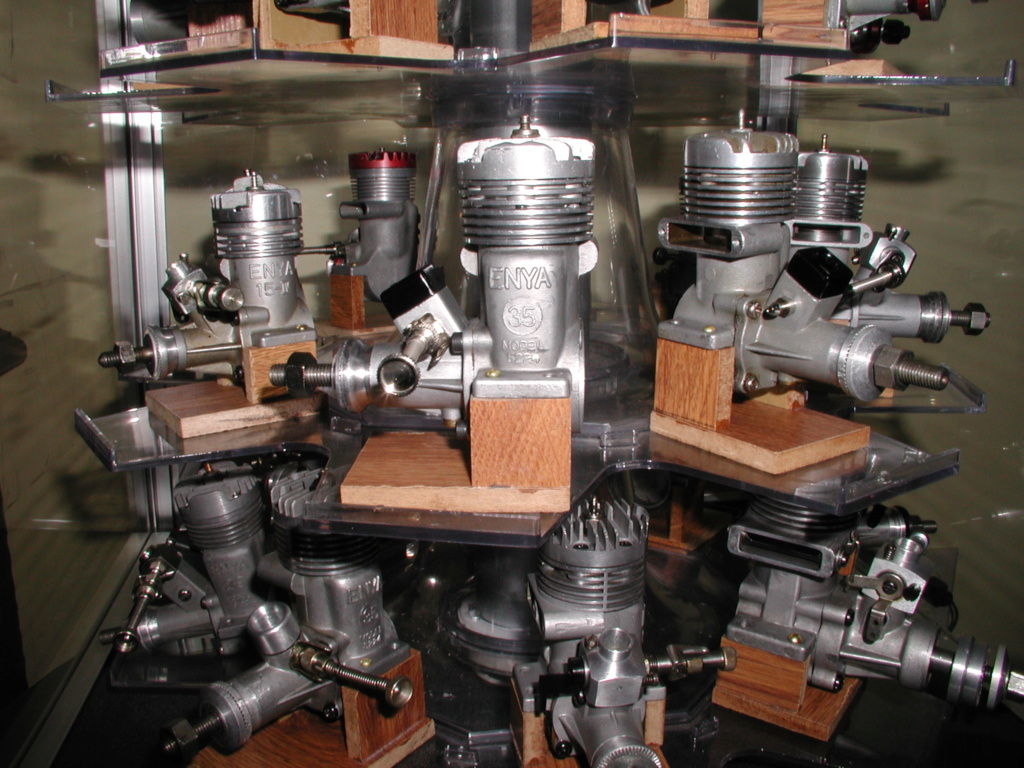 I will have to find a prop, turn it over and let you know.

Wow, this is a plethora of Enya's !!! Yes the one you picked is probably the one I was asking about..thank you for the follow-up of my request.

@dirk gently wrote:Thanks, I have a few engines with what seems to be this very problem - good compression and running well on the bench, but leaning out, loosing needle settings or outright dying in a climb, failing to burn out the full tank, etc.
I will give one a test clean as described in the article. I think I'm going to use the steel wool, as there's a plethora of different products branded '3M scotch brite', apparently with different grits, so that seems risky.

yep, i've used 3M scotch brite the green color and it works fine, but your right, a guy could mess something up with too course of grit.

Good Info Mark , Thanks , i am sure a few of us could benefit from knowing the signs of needing to devarnish !

I one read something about carbolic acid bath being a very effective quickie varnish stripper that didn't require must disassembly of engine but that it was somewhat hazardous?

Any experienced users out there?

You gotta be careful with the steel wool.  I messed up a really nice #3 cylinder chasing a spot inside. Just get rid of the varnish and quit.  Do it from the bottom, avoid the top of the cylinder as much as possible.

I love Enyas Bob, I've got a few, nothing near what you have, mine are mostly RC. The 60 X is one of my favorites, the 45CX with a pipe is an incredible powerhouse.

The quickest way is to run a couple tanks of full synth fuel through it. It works and it’s not enough to de varnish the ball socket.

Also, if you use castor/synth fuel you don’t have to worry about it for a very long time if ever.

Now I will have to go through my box of engines, and start cleaning everything that I have not run in decades just because

Just because. No better reason in the world.