» Last of the Enya Diesel engines purchased off of Enya's website.
by sosam117 Today at 12:47 pm

» Fox Fuel, or Mark's been flea marketing again
by getback Today at 9:37 am

» Anybody have atwood boat engine parts that you would part with???
by happydad Today at 9:26 am

Yup. Gonna bash one together to get my fingers nimble. This is practice while waiting for my Frog Mosquito clone kit to arrive. That one will have twin .09 Medallions.
This one should fly on 35' lines pretty well:

Hmmm. May be a bit nose heavy. Let's take another look:

Ok. We can fix that:

I think this will work! I intend on using as much kit wood as possible. I think most of the fuselage/bulkheads may be ok. But the wing will be straight up a clone wing: 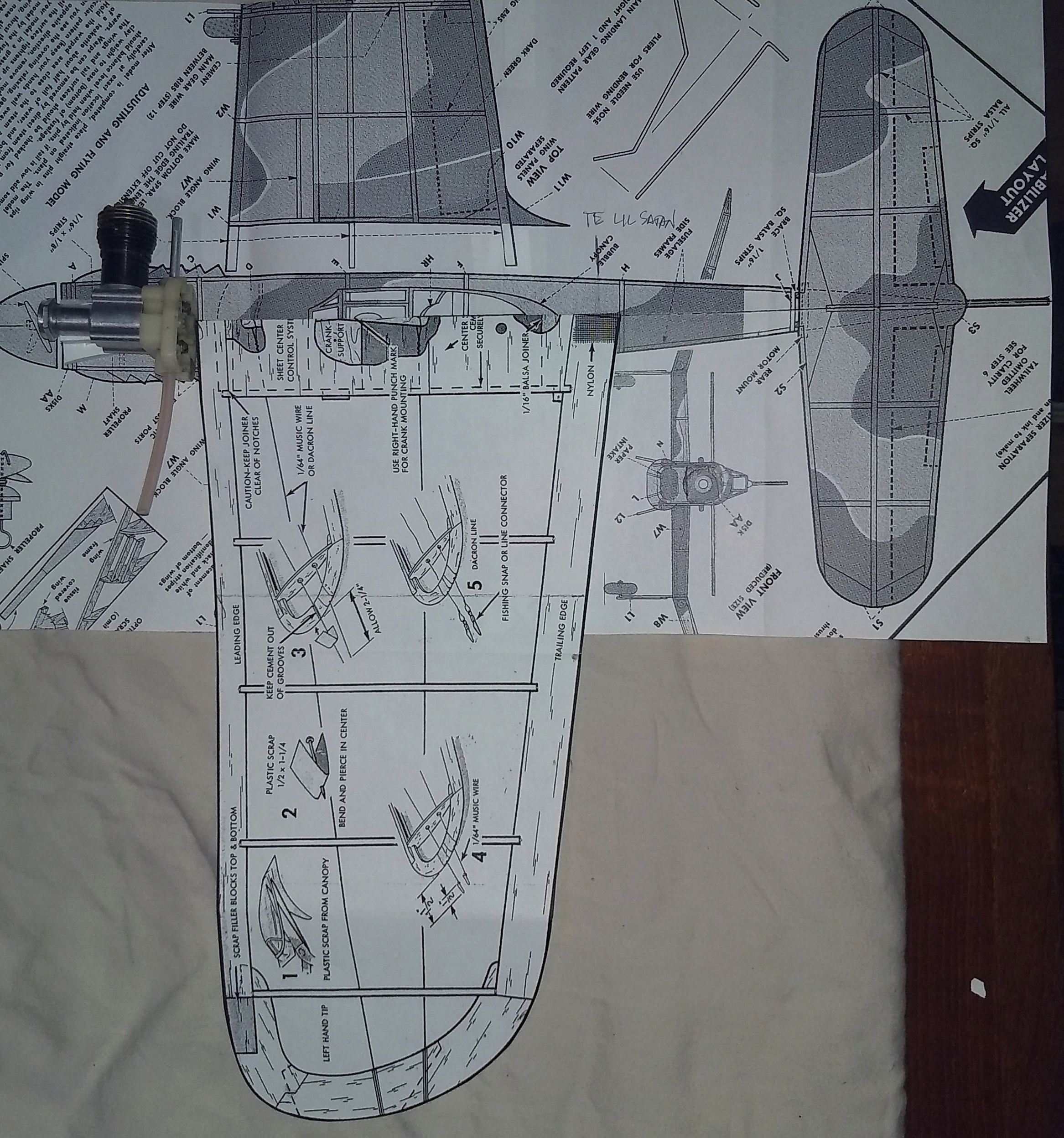 The tail will be scratched from scab lumber. It should remain about the same size as the stock kit.

But I still needed a bit more substance before jumping into a kit bash. A bunch of paper-covered foam sheet was being tossed at work. An hour later, I had this: 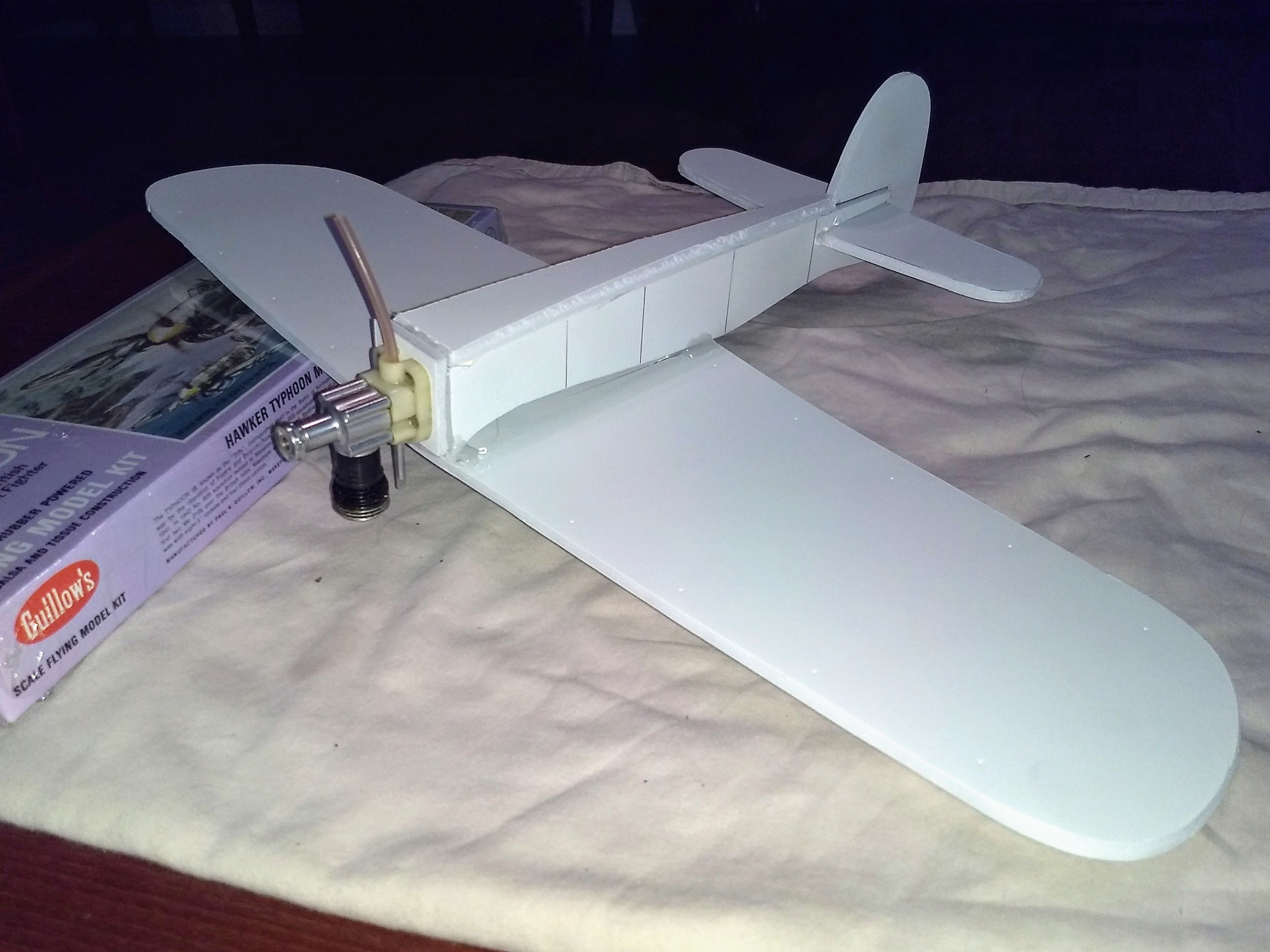 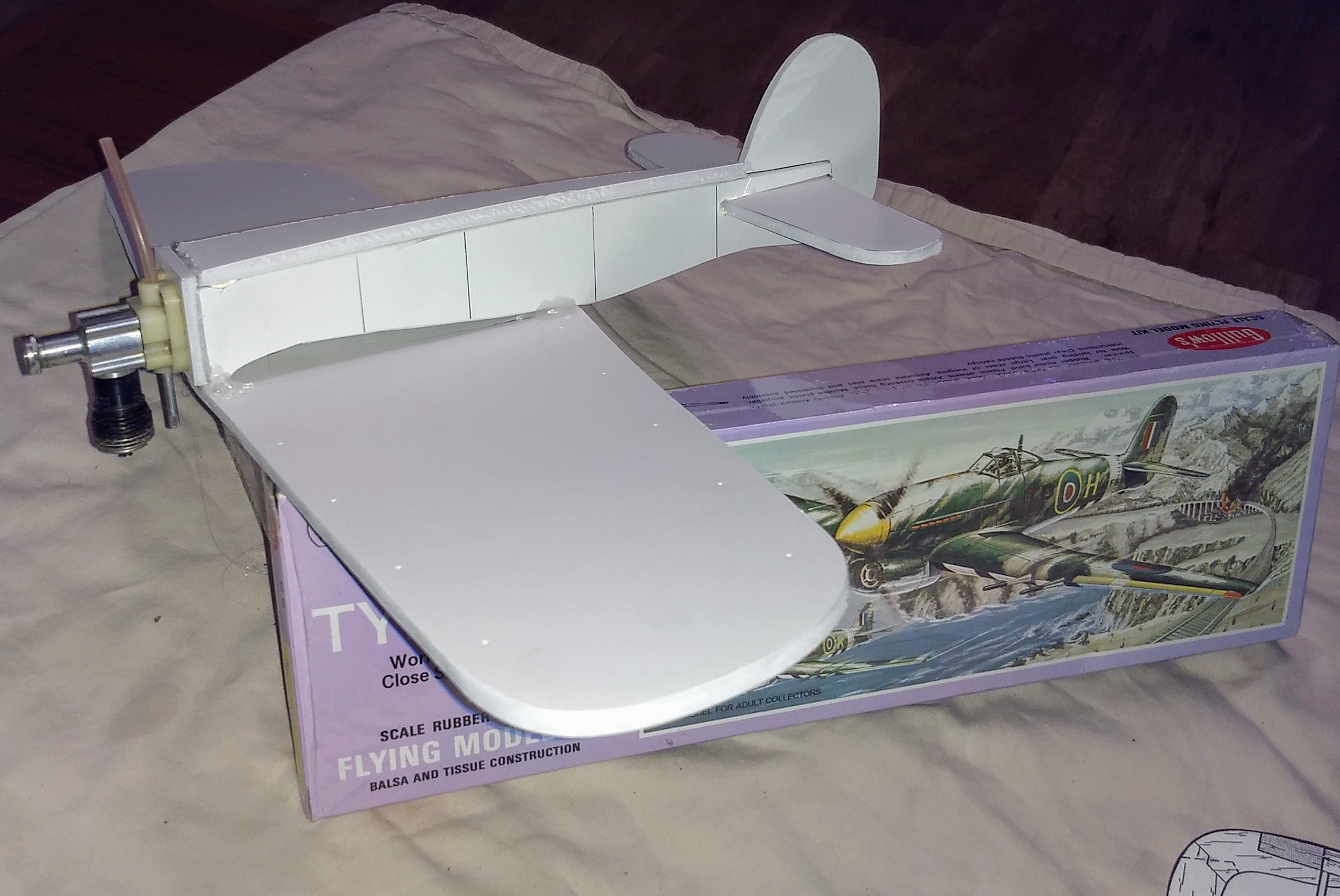 from dumpster to airplane

From dumpster to airplane to dumpster...……………

I'm not sure what your going after here Jim, but I'm lovin it.

Paper covered foam sheet airplane to get you back in the swing of things before tackling the Guillows I guess. Going to fly it?

Nope, not a flier.

The foamboard is a one-to-one mock-up model of the finished product. Since the 900 series kits are considered too small for the engine, I thought of ways to build the kit around the bigger engine.

First thought was to just scale the kit up...but I wanted the more toy-like look of the smaller plane.

Then I thought, "hmmmm, I should stick with the same size, but with another wing." My first take was a mock-up side view on a Lil Satan...this was in the Wido Satan that OhBee got. It really looked workable, except for the non-tapered wing looking kind of, well, obtuse.

A quick review of other planes had me thinking of the Baby RingMaster. That wing looks good for a Spitfire, but not so much the Typhoon. From there I took a peek at the Lil Jumping Bean because the wing shape looked enough like the Typhoon wing (but bigger).

To me, this looks about right. The trick is to use as much of the kit as possible so it doesn't look too far from "normal." I wasn't looking to build a flying characature. We'll see how it goes.

So, with the mock-up in sight, time to start thinking this through.

All ribs were printed/glued/cut. Leading edge mitered and slotted for the brace. Then I started thinking about how to handle the fuselage. Then back to the wing. I know I need the wing done so I can fit the wing saddle in the fuselage.

I remembered seeing a rib-centerline tool online, and realized it is time to own one. I have about 6 kits that all have symmetric ribs.
I imagine I'll be making some mini-incidence meters too. Considering mass-production on a micro-scale, I also made a wing jig just big enough to smoothly handle up to a 20" wing or fuselage. 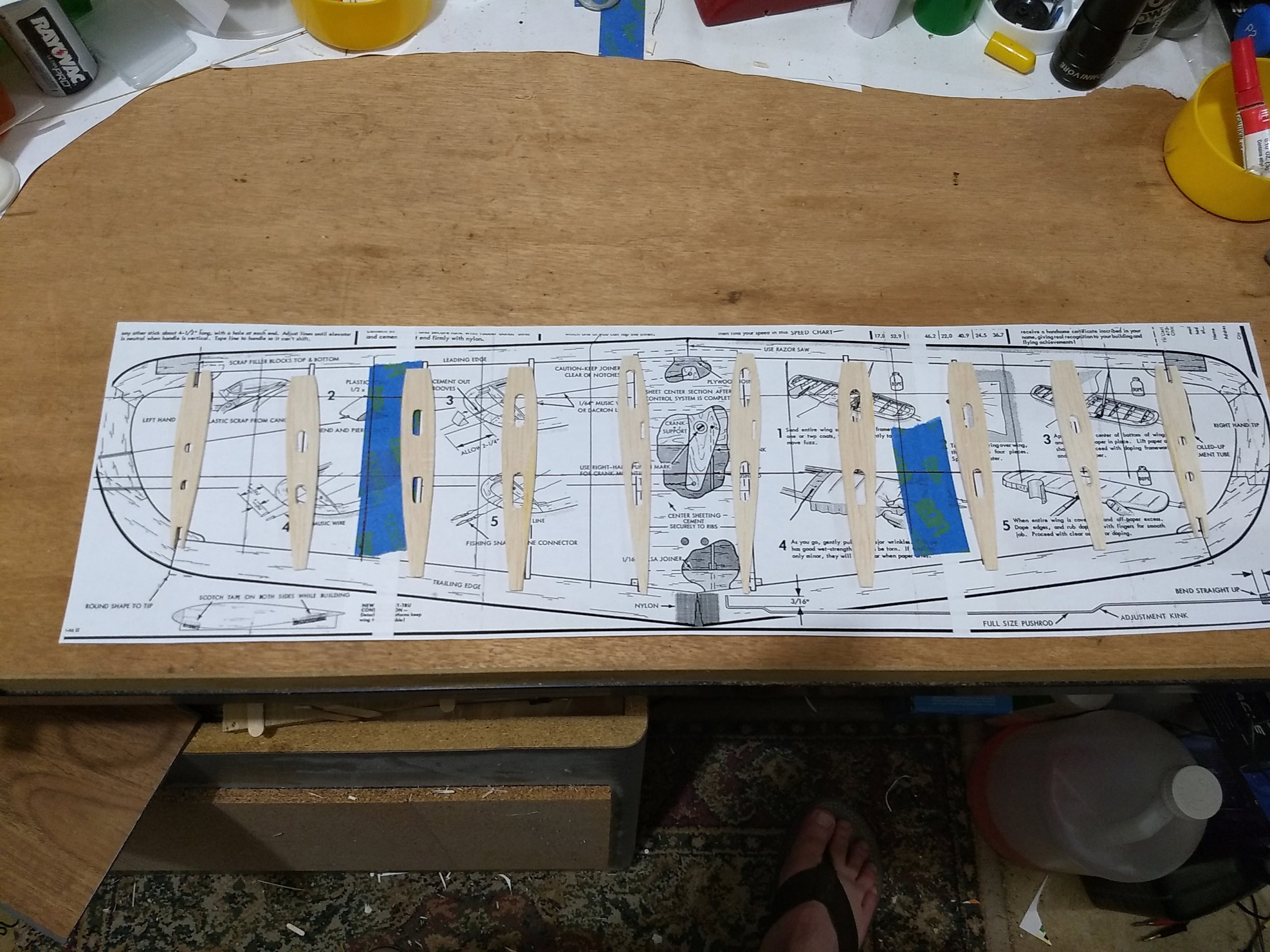 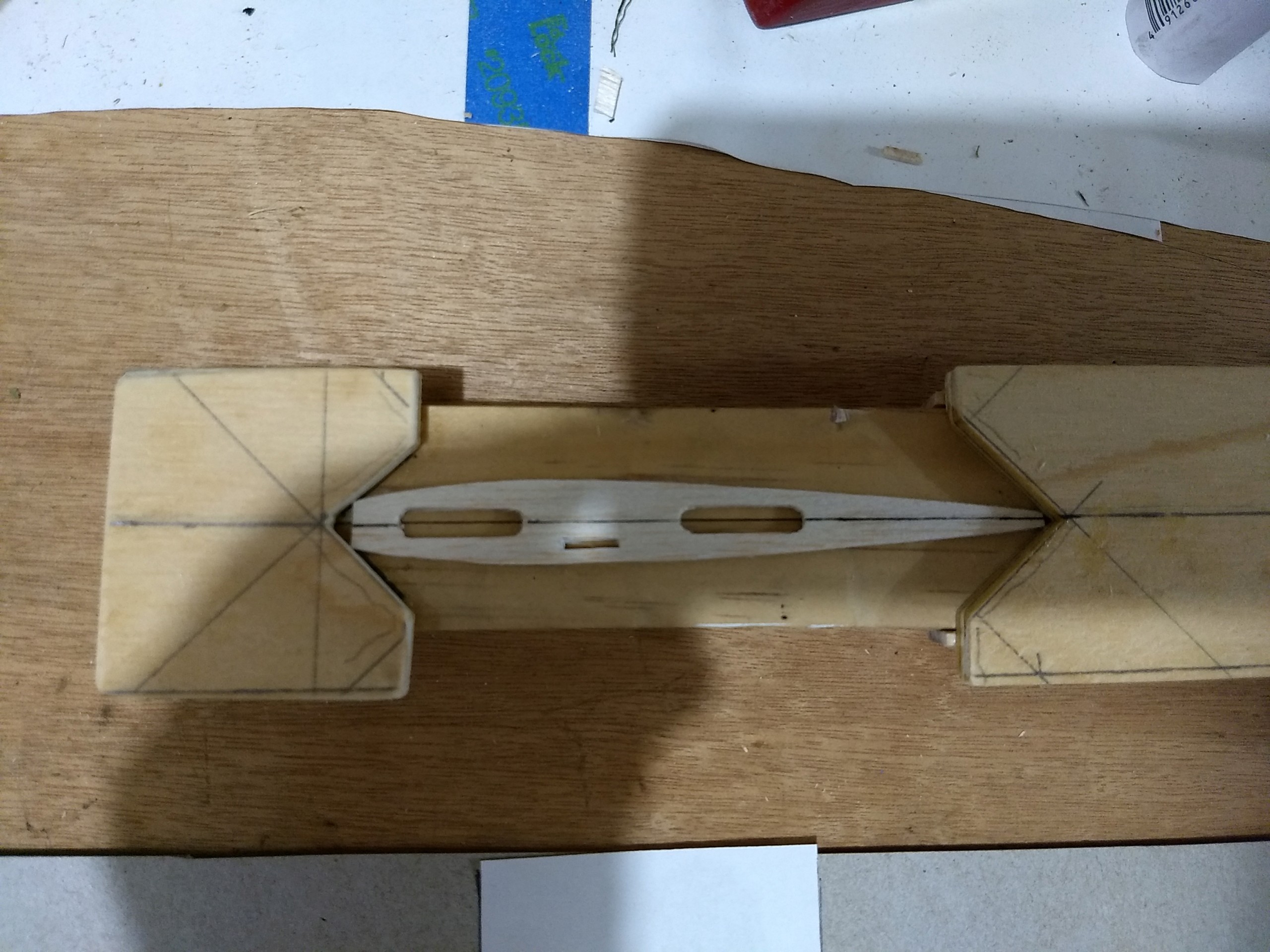 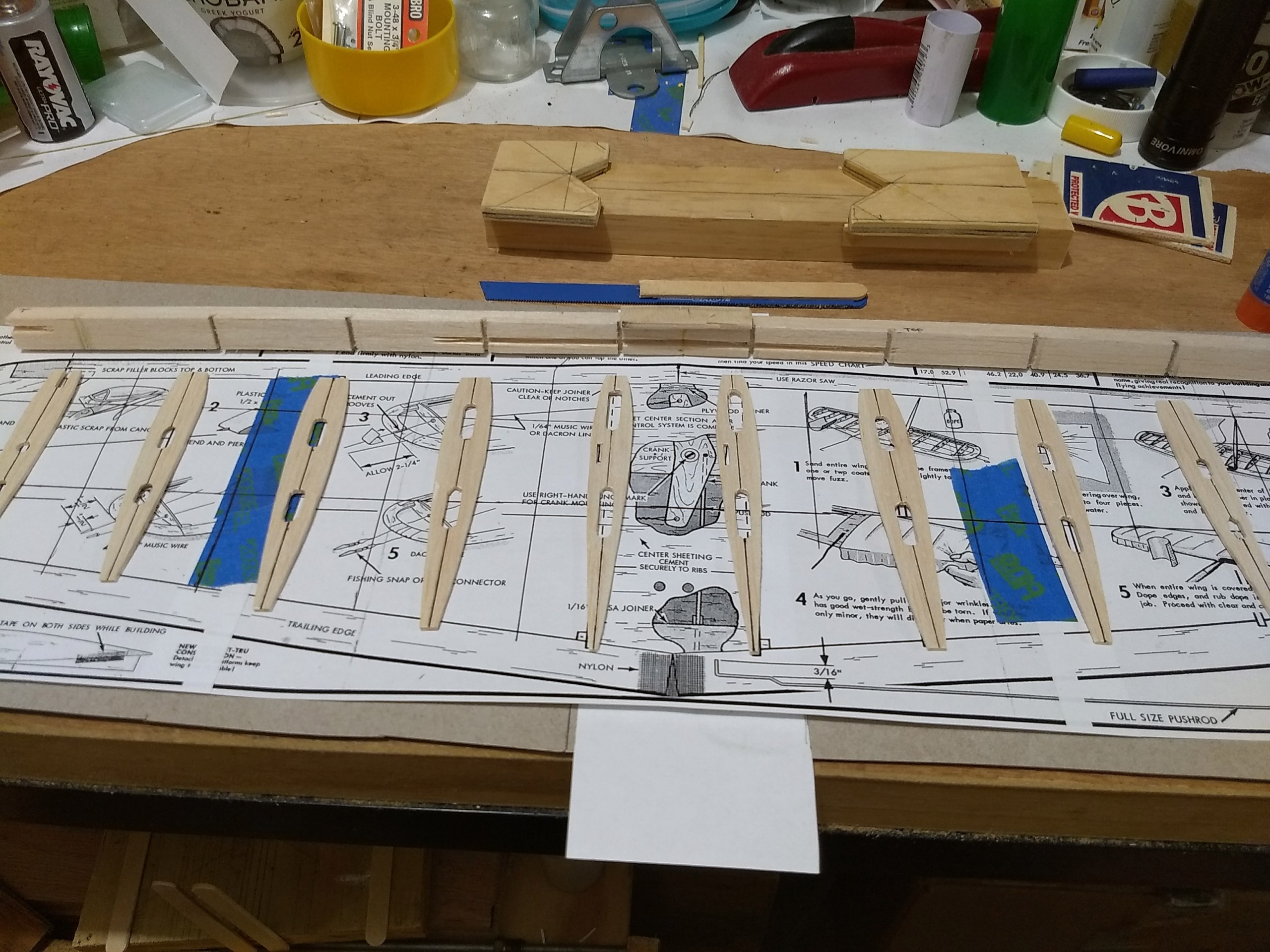 The rib jig was fun to knock out: 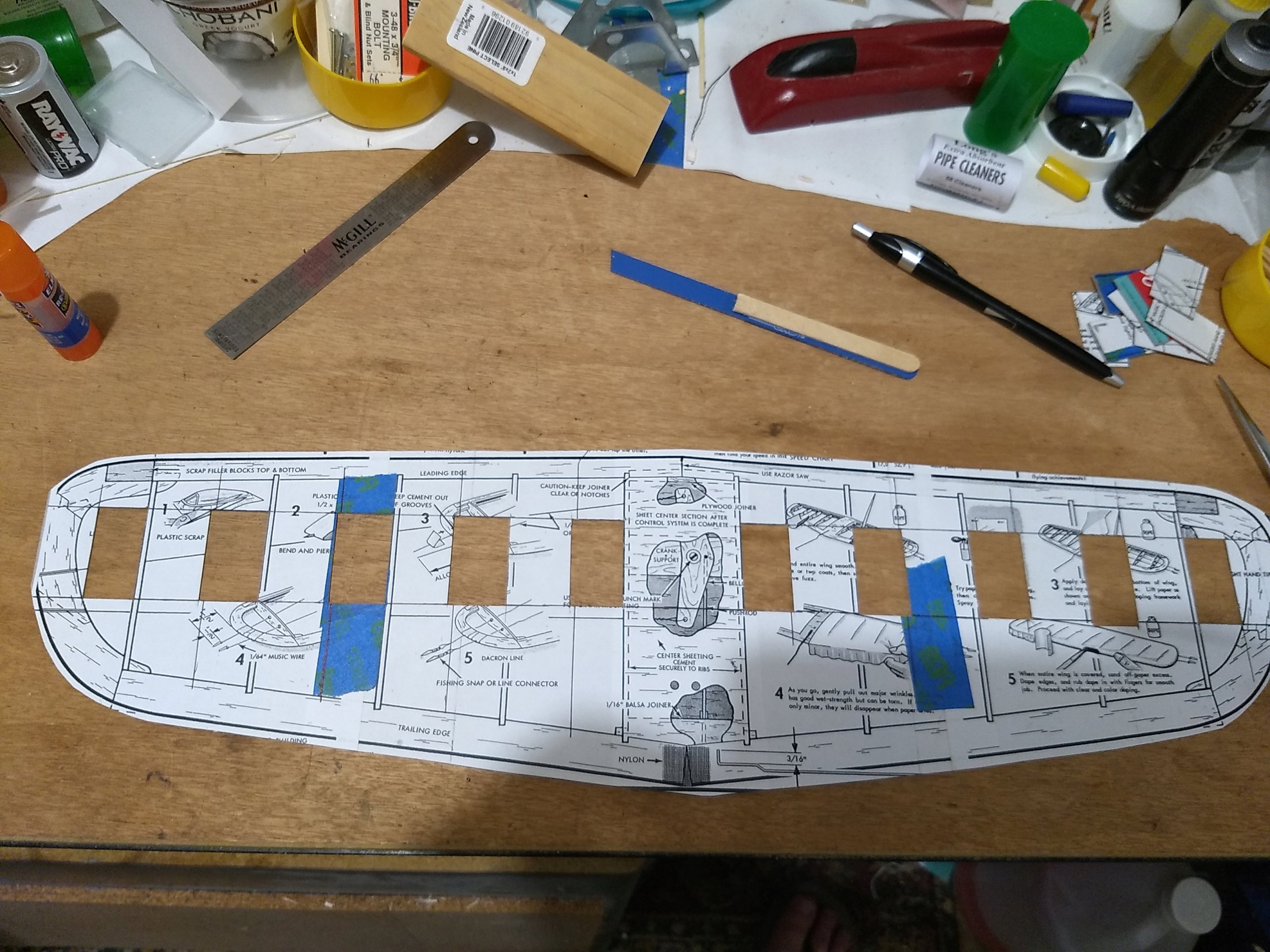 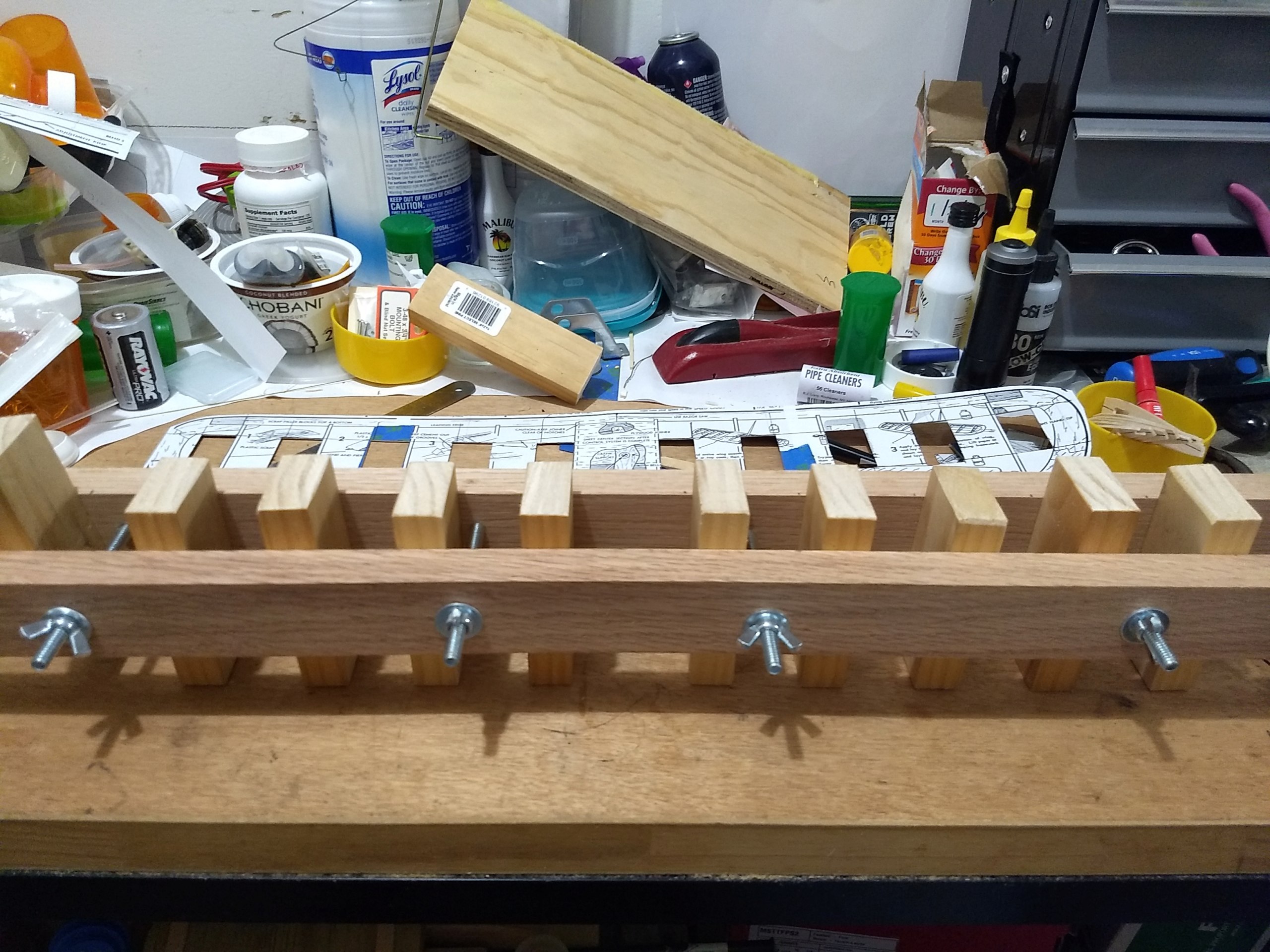 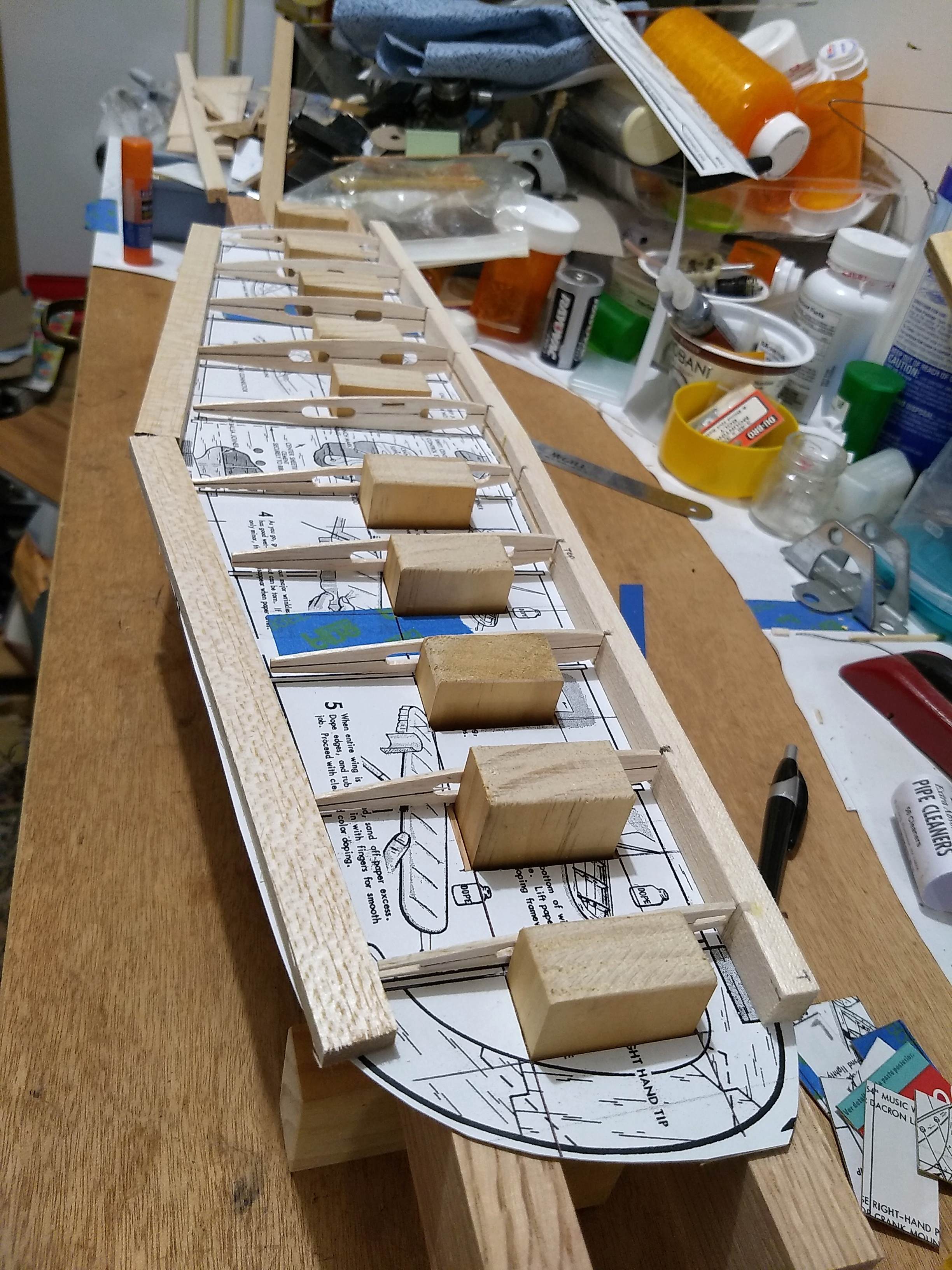 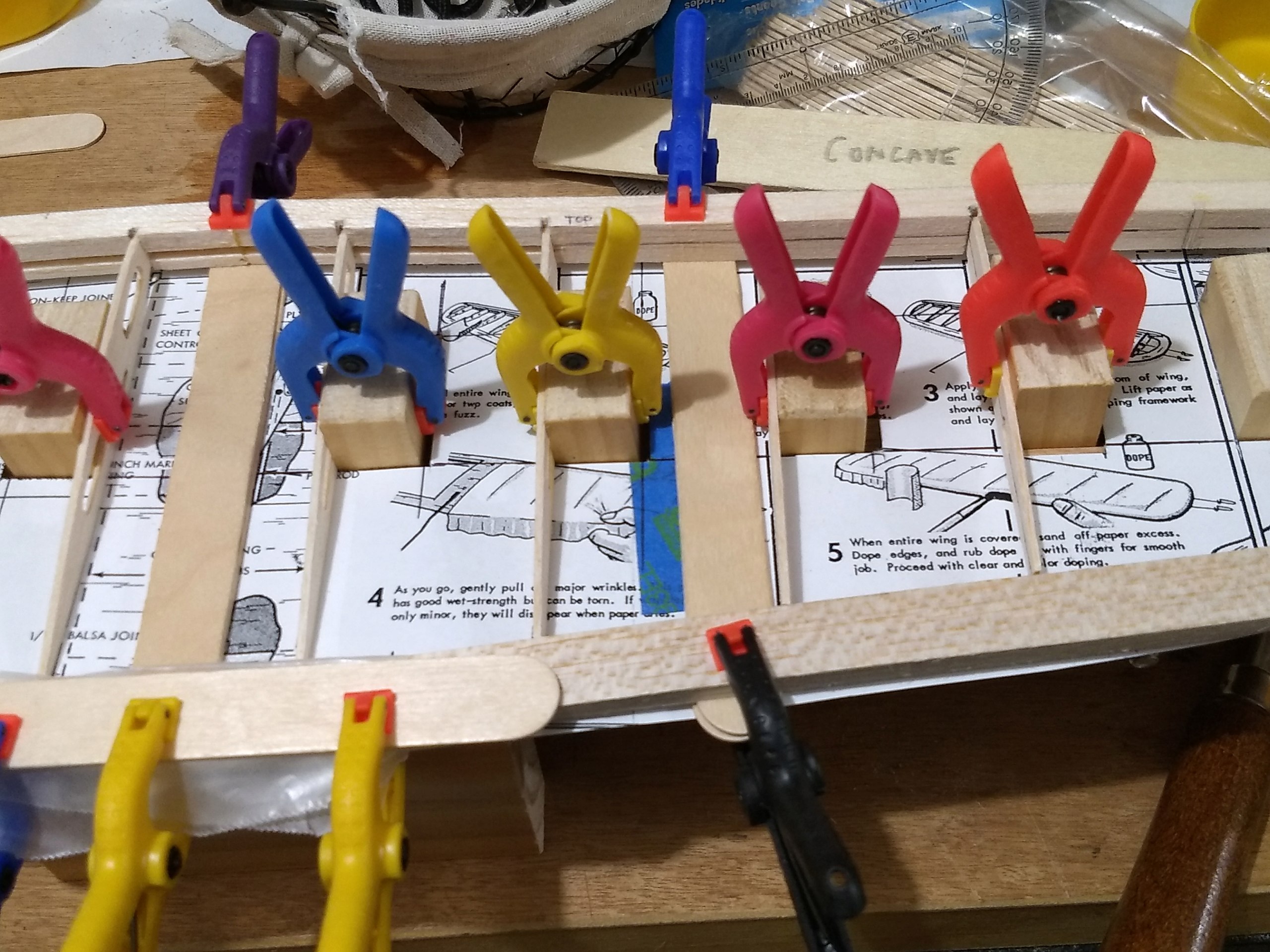 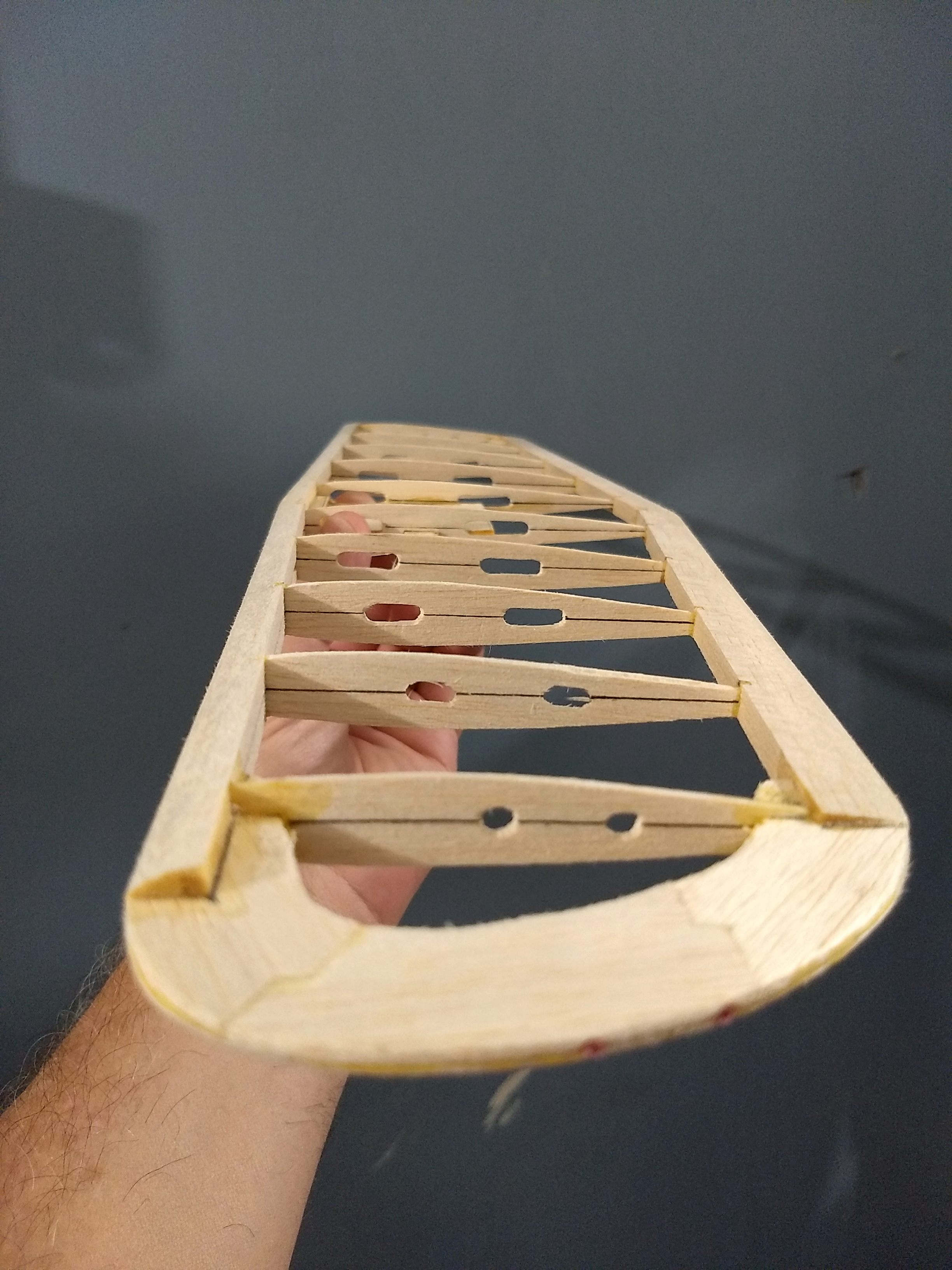 Jim, if your don't get a straight wing out of this, it's not because your not trying.

Looking good and waiting to see the final product.

Remember the all white foam mock-up? 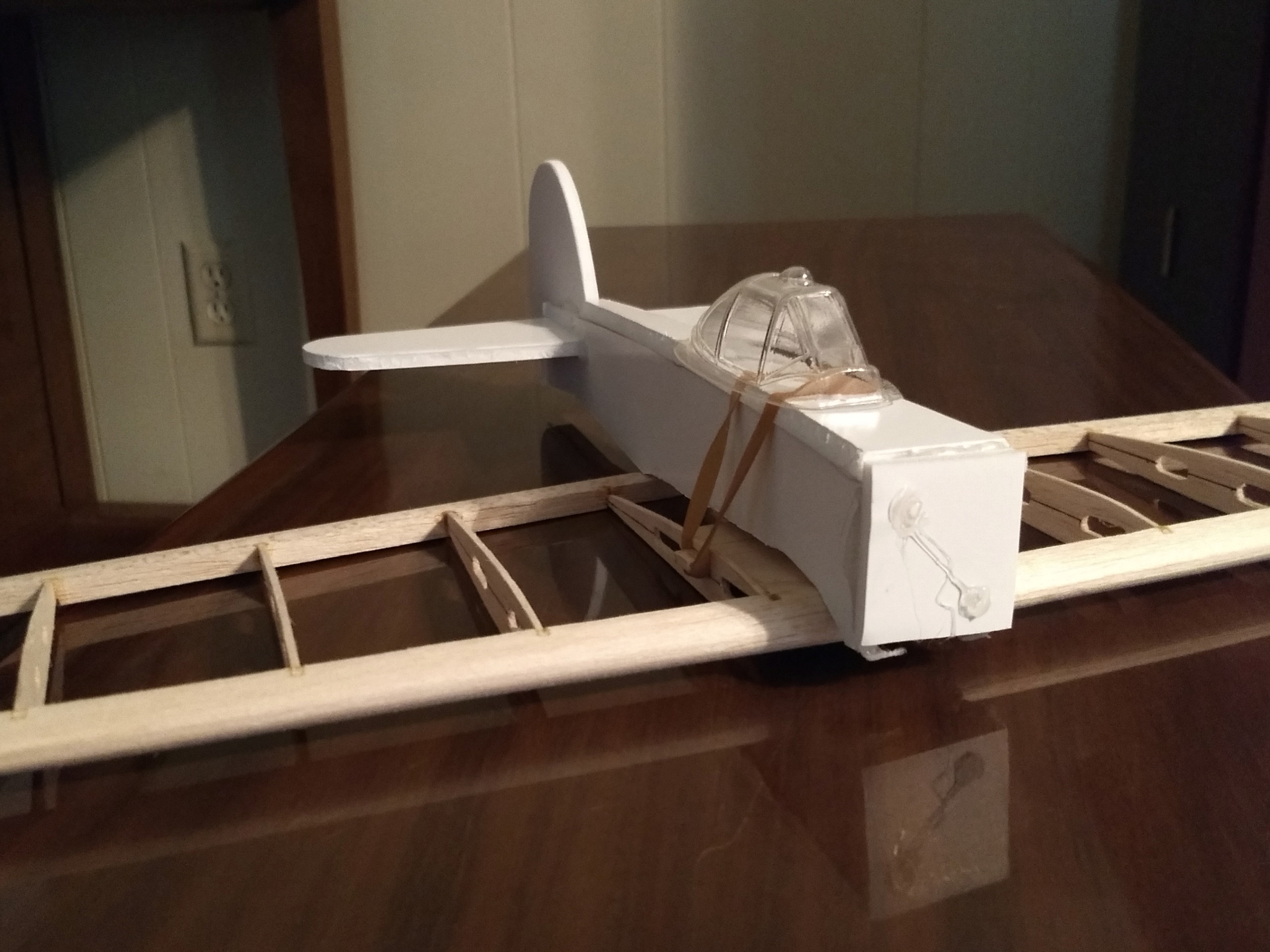 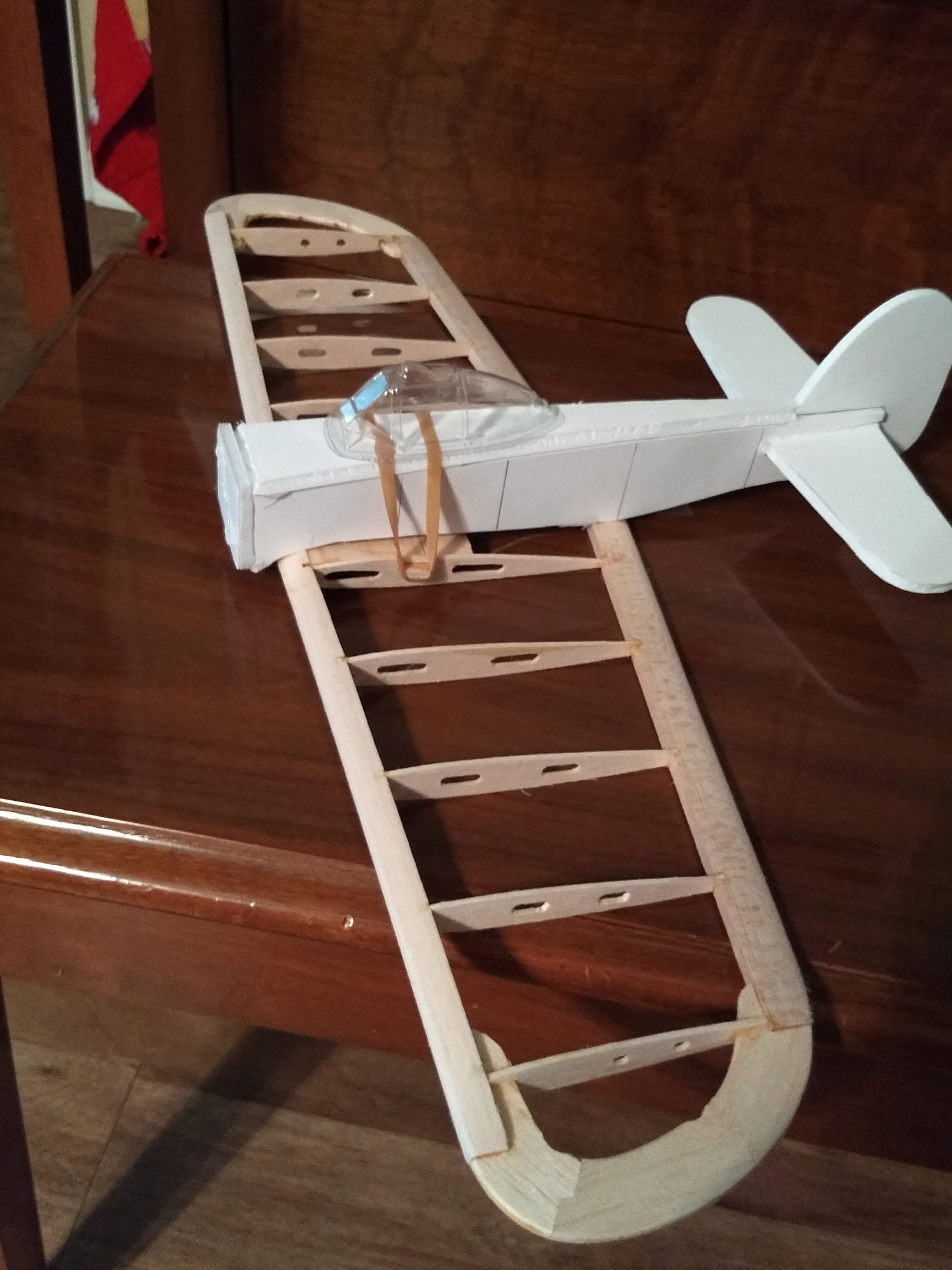 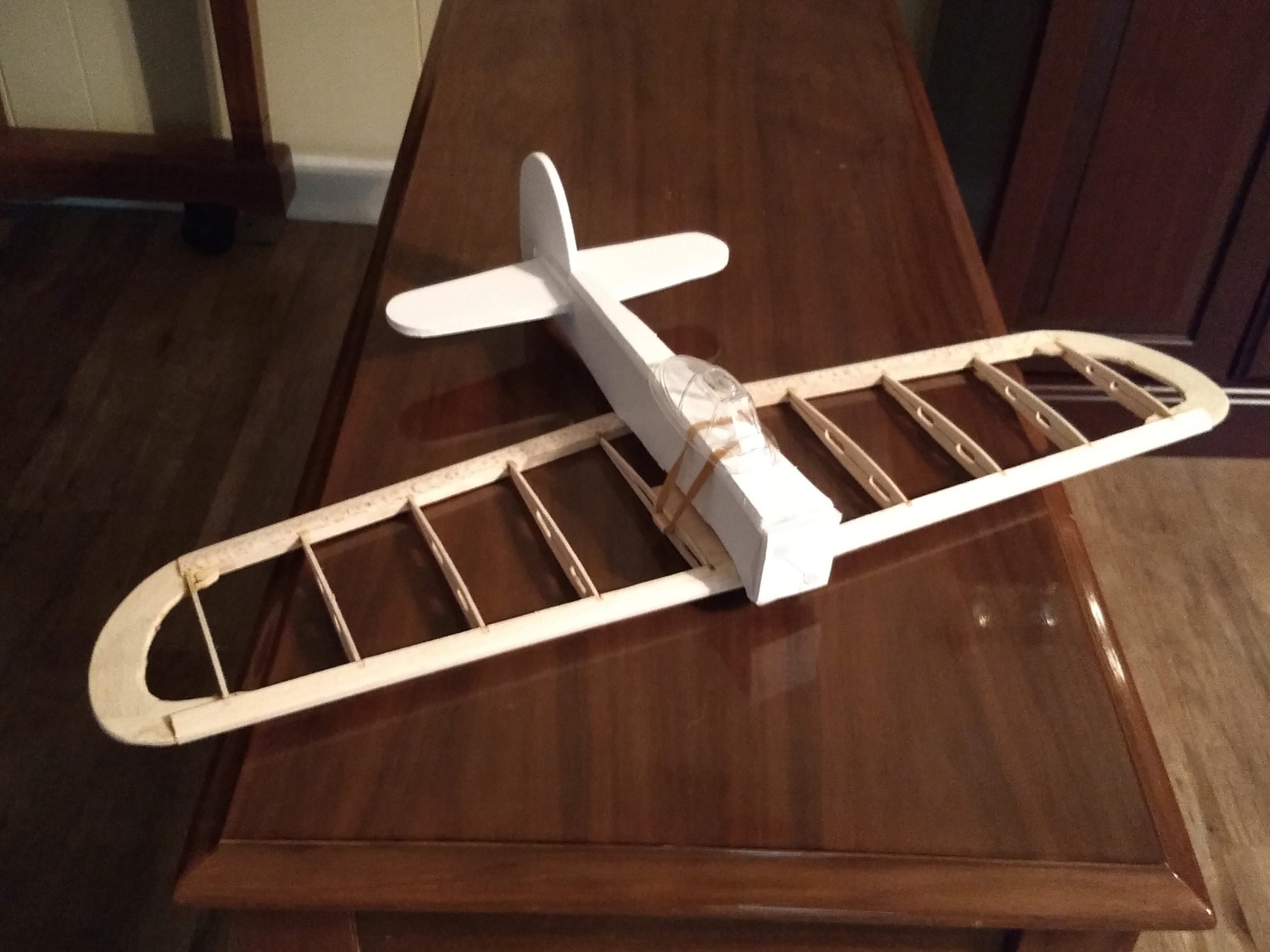 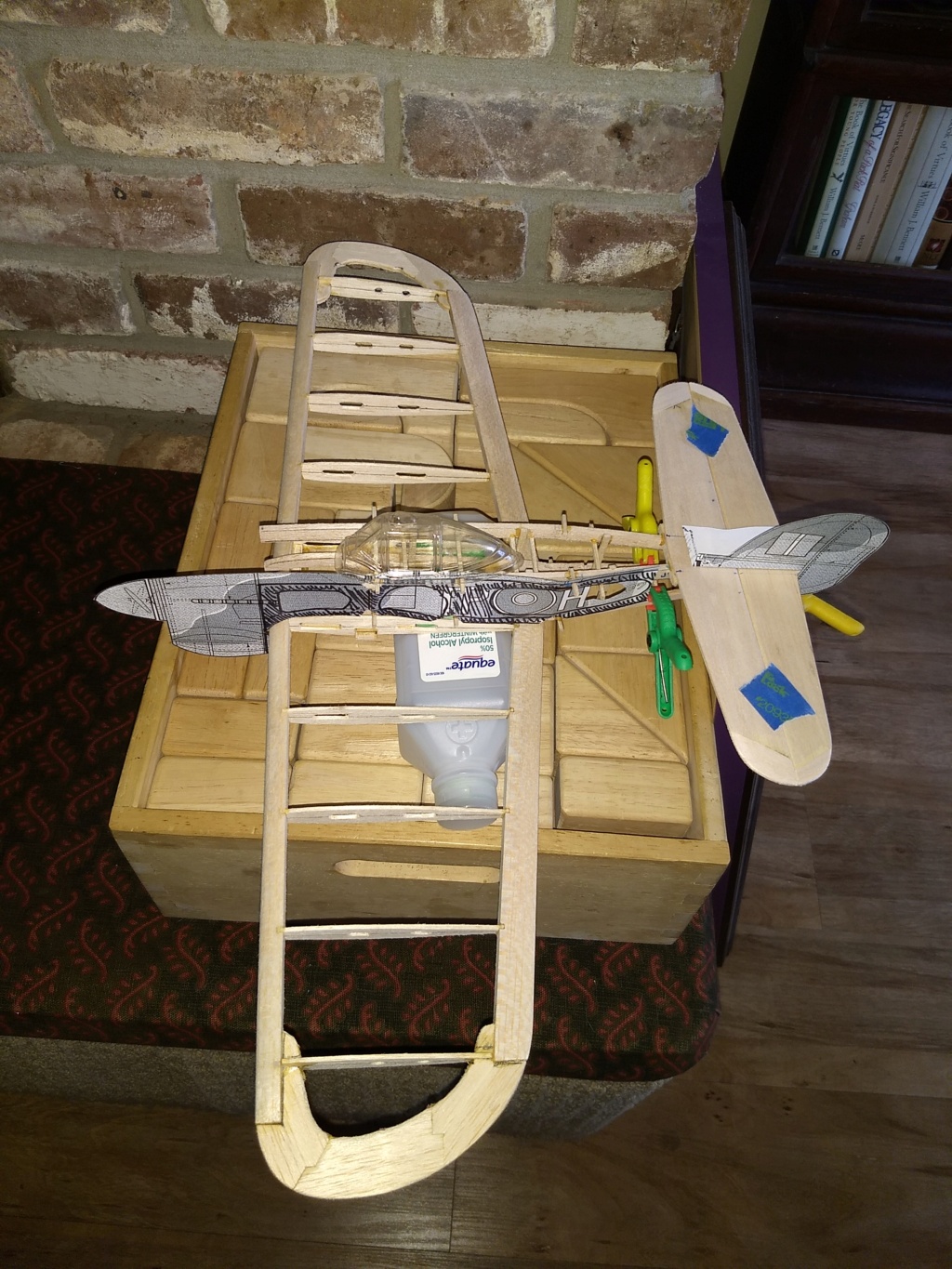 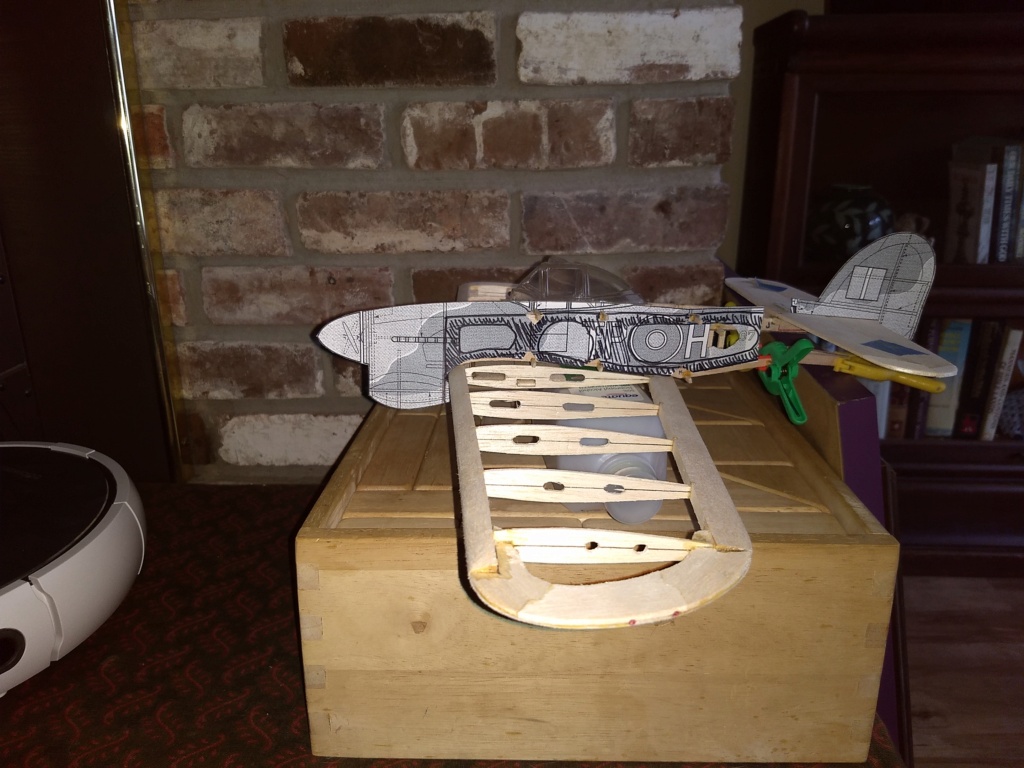 Thanks.
This is a Lil Jumping Bean wing. I "grafted" the wing in on the stock kit plan (top and side) and thought "this may work!" The BRM wing looks more like the kit wing than the Lil Satan wing I first considered.

The stab and elevator are scaled up 125% to approximately how he same area as the LJB part, but cut on the Typhoon hinge line.

The rudder and side view are stock sizes, since I wanted the profile to stay in the 900 series size (small and cute). The fuselage is about 1/8" wider to fit the engine backplate between the fuselage sides. This will require cutting new formers/bulkheads just a bit wider...hopefully the canopy will flex enough to fit the slightly larger compound curves of the wider fuselage.

Expect a custom single vent tank (I'm a glutton for punishment) just above the LE, between the firewall at LE and the single former in front of the canopy. This may change as I hope to finish my Scientific Red Tiger P-40  with another custom single-vent tank that must be vetted (really only needs paint at this point).

The engine will be standard horseshoe-backplate. Any mods may be considered as I optimize power for loops, high wingovers and inverted (the reason for the LJB wing in place of stock).

Apart from (hopefully not so obvious) changes, the landing gear may be mounted right behind the engine on the firewall. I considered wing-mounting the LG too late into the wing construction and missed a golden opportunity to reinforce the LE for landing loads. I do like the idea of blacked-out (open) wheel wells and doors on the gear, especially if the LG looks like it is wing-mounted.

I expect to build the engine cowl to enclose the engine inverted, with the needle valve top-side. The scoop will hopefully be open at the back under the wing to allow exhaust/oil to escape rather than pool/collect inside.