Log in
Search
Latest topics
» Jerobee how To save how to fix a broken frame
by davidll1984 Today at 5:48 pm

More racket in the backyard:
After a long wait, (as in from 2009) Uncle Wayne's Carl Goldberg "Buster" control line stunter is made ready for it's first flight since it's restoration.

If Wayne can make it to this Saturday's Breezy Hill Open House, flying it for him will be my #1 priority.  It may still get flown if he can't come, but I may hold off 'till we can arraign for him to see it fly.

The Buster kit was debuted by Carl Goldberg Models in 1962.  Wayne built this one in 1968 or so, after his similar Goldberg "Shoestring" stunter was lost to a line break.  It was flown hard, but only suffered "repairable incidents" 'till it was retired in 1971 or so.  We flew it again in the 1980's, but it was definitely showing it's age.

Decades later, Wayne gave it to me with the intent of getting it going again, and here we are. 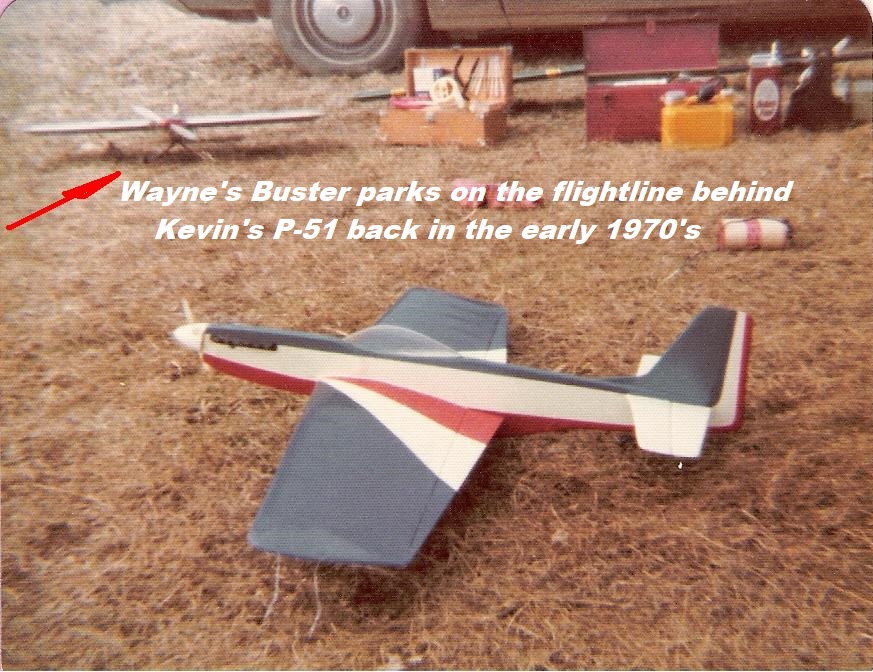 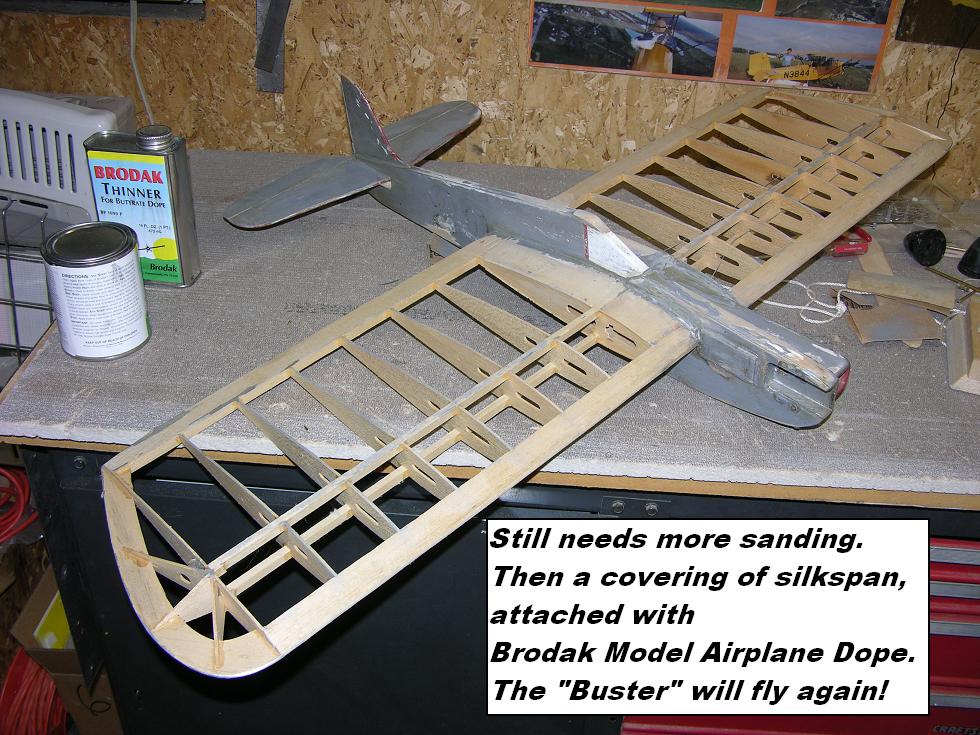 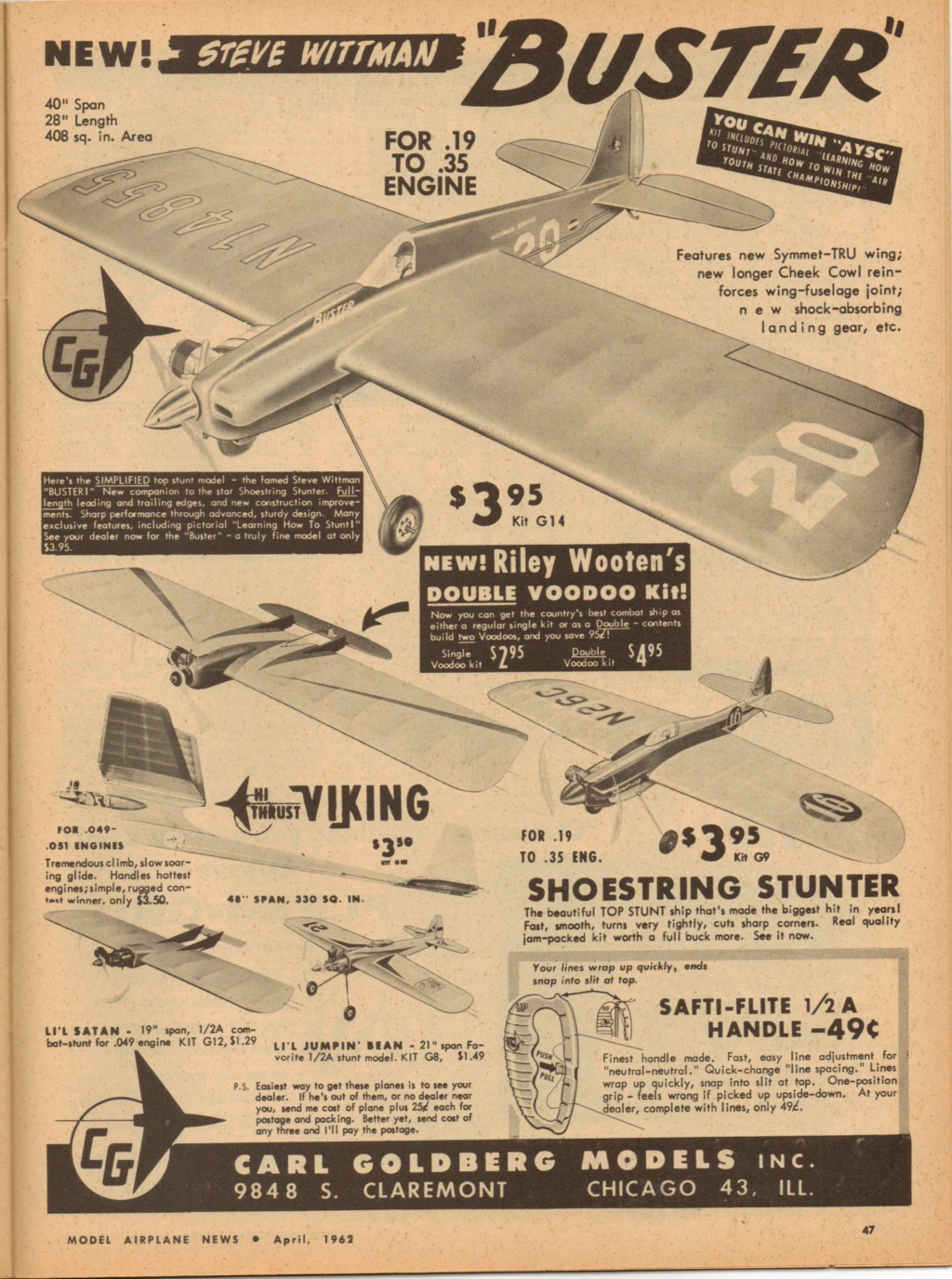 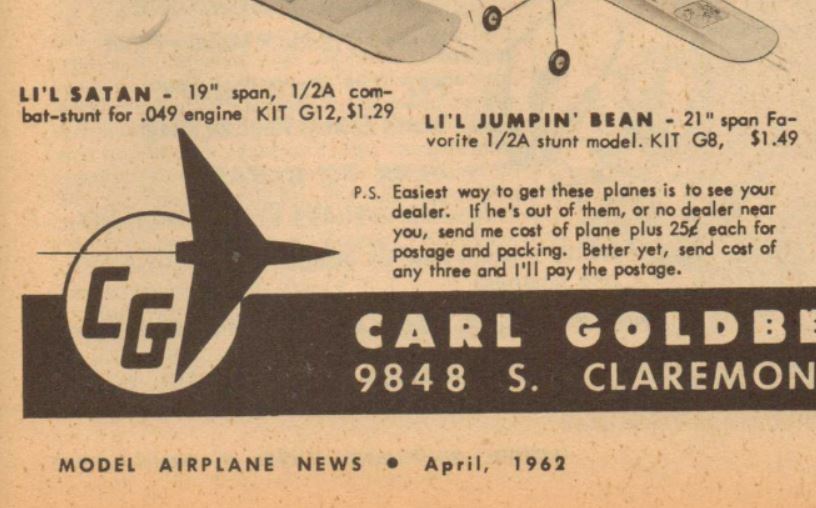 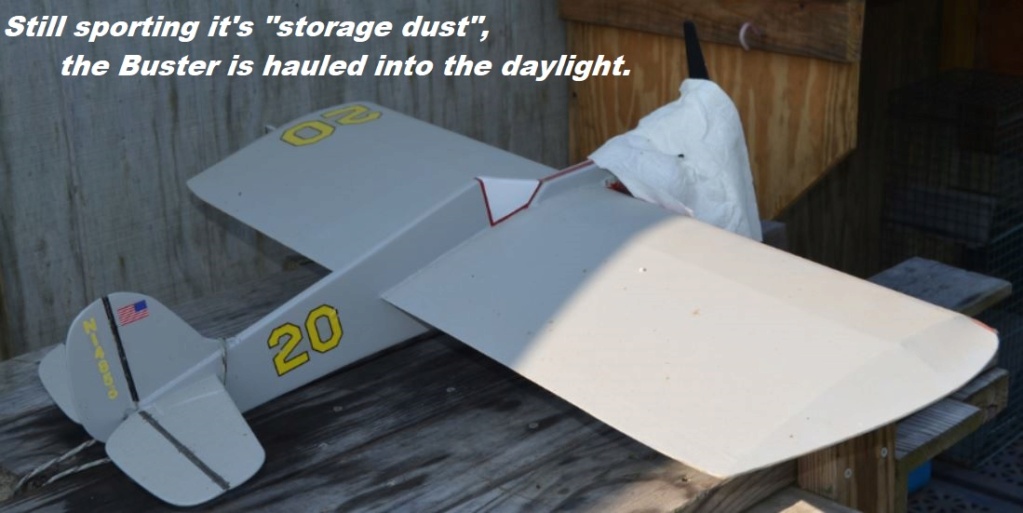 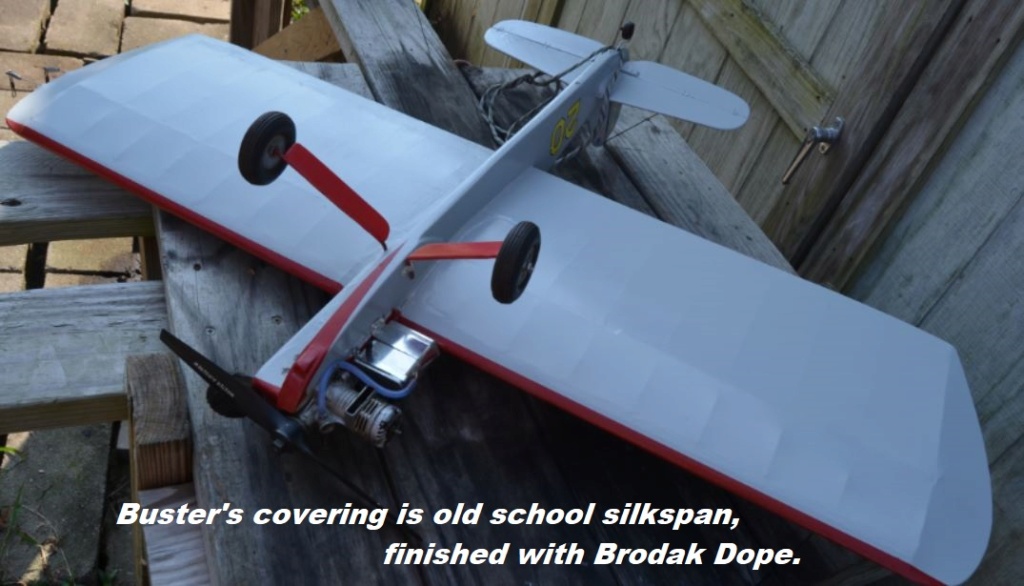 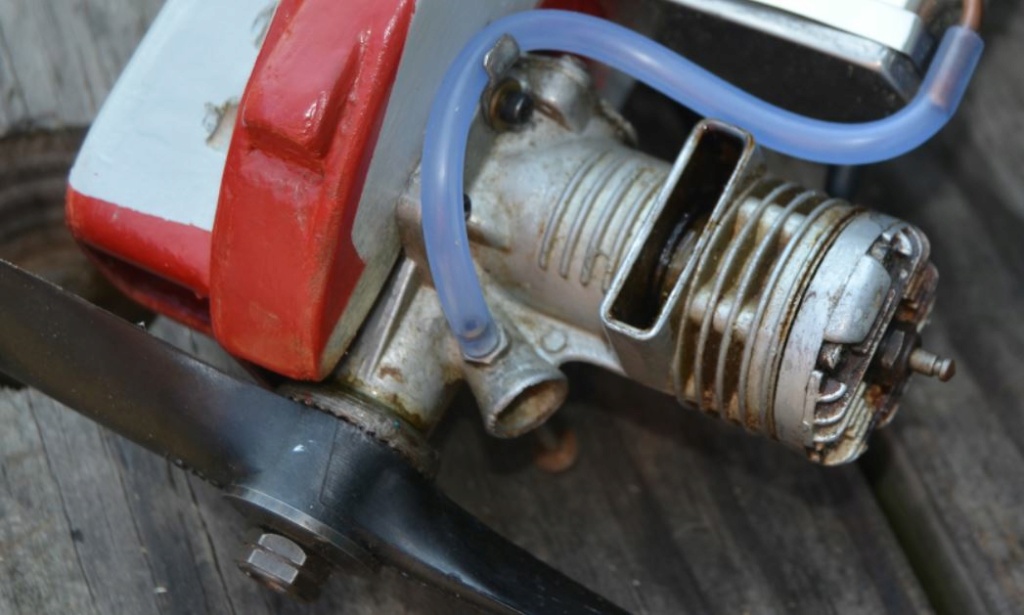 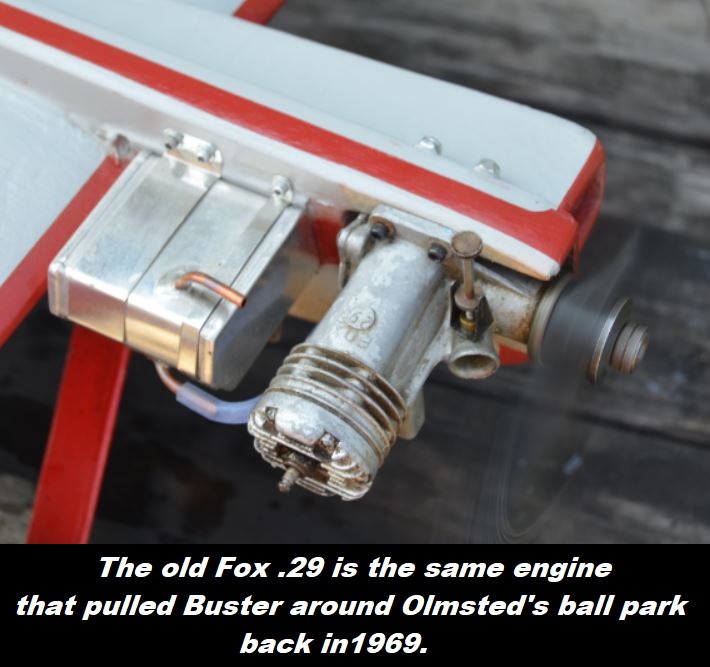 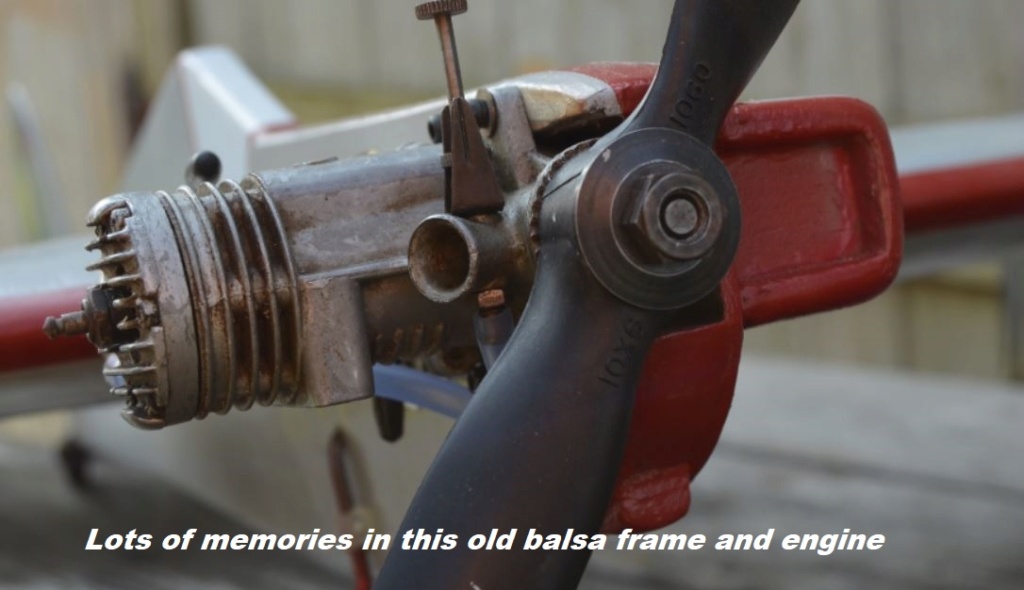 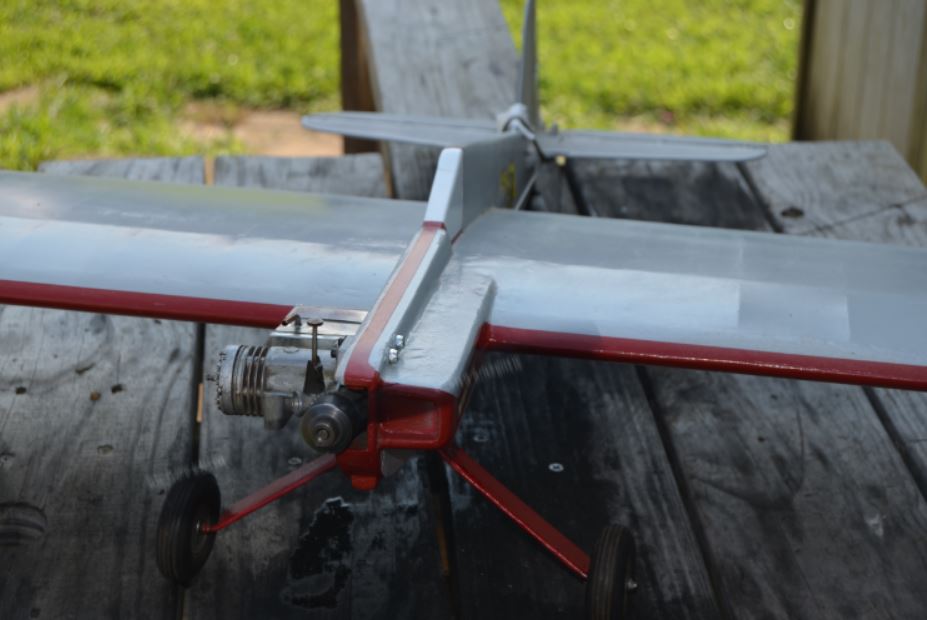 ohhh Kim !, great restoration work, it has really been like new.
Removing the silkspan that is years old is not an easy task, it requires a lot of skill! You have worked very neatly there, congratulations Kim.
I hope to see some video of that model in flight in your hands friend!

A beautiful restoration and gesture to your uncle, Kim..I wish I had someone in the family like you who will fly my planes when the time comes and I will not be able to safely operate my COX RC toys..

Very NICE !! I am sure Wayne will be Happy to see the work you have put into the Buster and to see it Fly again . I thought it looked alot like the Shoestring But after seeing the profile Not GY racer yes . I bet that Fox is Howling to get in the air

Kim, you might need to extend your uniflow pipe with a small piece of fuel tubing. I make them so they lay on the cylinder head. Many times the cylinder head makes turbulent air as it spills off the head prior to the pipe offering crappy runs.

Great job on the resto, made me smile!

Feel free to come to Harrah OK and sling that bird! I can set up a day of flying this fall. Would be nice to see you and meet Uncle Wayne.

@Cribbs74 wrote:Feel free to come to Harrah OK and sling that bird! I can set up a day of flying this fall. Would be nice to see you and meet Uncle Wayne.

Ron, that would be great. I put in my list of destinations! Wayne doesn't stray far from his little house these days, though. It'll be a big deal if he follows though and lets his daughter bring him to Breezy Hill this Saturday.

I'll have to look at this run though...it would be a bunch of fun!

Seeing the Buster was a real walk through memory lane.

My first "large" controlline model was a Buster with a McCoy .19. It was not nearly as nicely painted as yours -- mine was solid blue (all my early models were solid blue since that was the only colored dope I had!). I think I was around 13 or 14 when I built the kit. Having only built 1/2A models, I forgot to add the outboard tip weight.

Maiden flight: My father hand launched it and without the tip weight, it dropped the inboard wing and immediately headed for a wingover. It climbed at about a 45 degree angle to the top of the circle when the lines snapped tight. My only experience to date was with 1/2A, so I (in full panic mode at this time) was unprepared for the increased line pull of a larger model -- in short, it jerked the handle out of my hand, pivoted 90 degrees and headed down at 45 degrees to be completely re-kitted. I was brokenhearted and ashamed for losing my plane -- especially since it was entirely my fault in omitting the tip weight.

Looking forward to video from this weekend. Uncle Wayne is a lucky guy!

Well, Wayne has already said he's probably not coming to the Open House. I kinda figured this would happen, as he's at a point where an up-coming event causes him more worry than anticipation of good times. I may go ahead and fly Buster to get it trimmed out, then fly it at Wayne's place.

It could still change, but we'll see. The Flyers were all looking forward to seeing him there, though I kinda played that down, because of the delicate balance between his being welcomed and being pressured to show-up. His daughter, Carol will support whatever he wants to do, and I hope he gives it a try.

I really hope he can make it , Andrew that sounds like what will happen to me if i ever get a bigger model in the air , with my lesser grip from Arthritis

I still got the shoestring from the 70s that i finished and then the control horn block gave a way /? now the tissue is mostly off and still needs repair well i just don't know . The Enya .29 i think is finally broken in THAT WAS A PAIN being the kid without a elect. starter !!

Nice job on restoring that Buster Kim . Always liked the Buster and the Shoe String . Built and flew the Cosmic Wind also but I did not like it as much as the other two . $3.95 for a .35 size kit , my gosh you can't buy a sheet of balsa for that price now in days .

Finally got Buster's restoration flight in yesterday morning.  The flying part of this flight report is pretty mundane as I wanted to hold off on loops and such until Uncle Wayne is present to see it do some flip-flops.  So, the morning consisted of roundy-rounds, with a couple wing-overish pulls.

As usual, I had more photo equipment than I could keep track of, and got some pretty good footage, but decided to pass using the little airborne key fob cameras.  The Mavic drone behaved, and got some decent video of Breezy Hill's beautiful "Crop Circle".

The old control liner flew great once we got past a wheel falling off, the fuel line suddenly refusing to stay attached to the engine, my inability to find my allen wrenches, and a few other "omens" that would have made a more superstitious pilot think about shutting down for another day.

One thing for sure, I needn't have worried about the power of the old Fox .29, making me use 52' lines for the first flights.  While is was a bit cranky through the first couple of rounds (think the spray bar needs another flushing), it lit up and hauled the Buster around with authority.  It's next flights will be on 60' cables, and hopefully with the Fox doing it's 4-2 break, rather than acting like it's bolted to a combat wing. 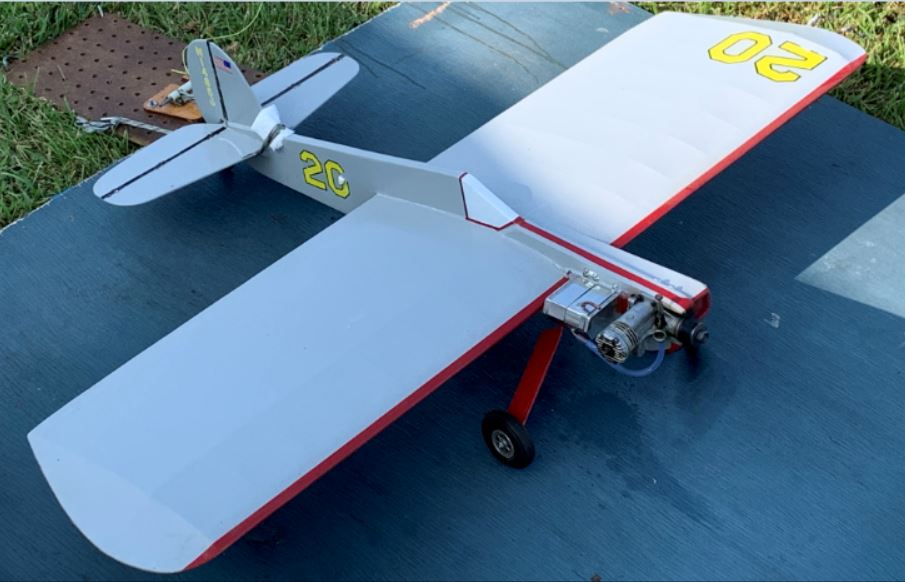 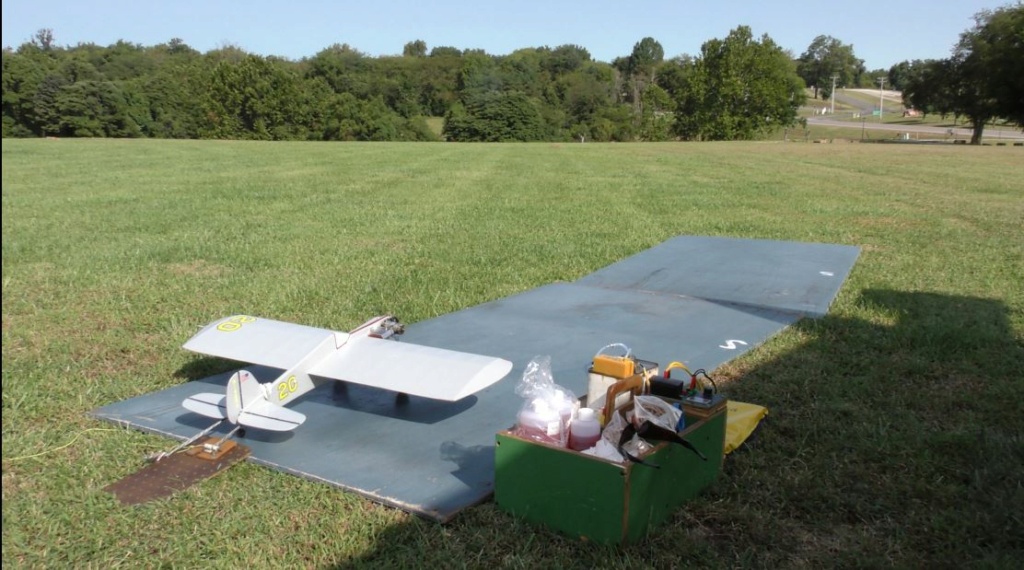 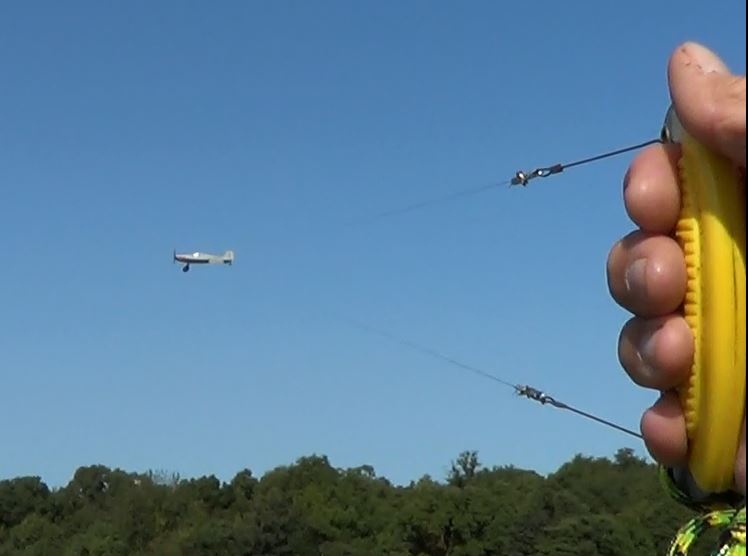 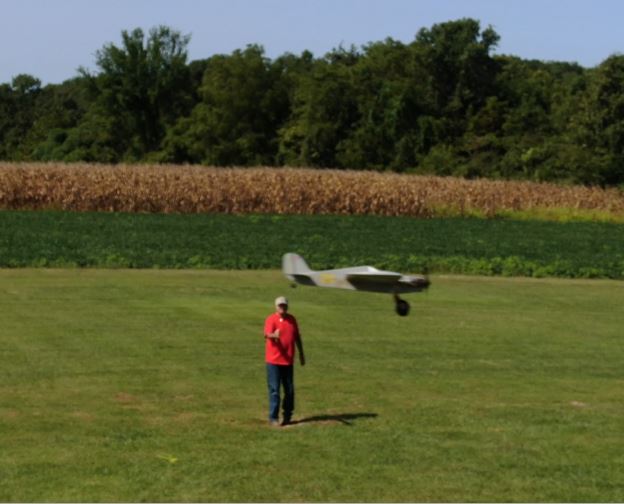 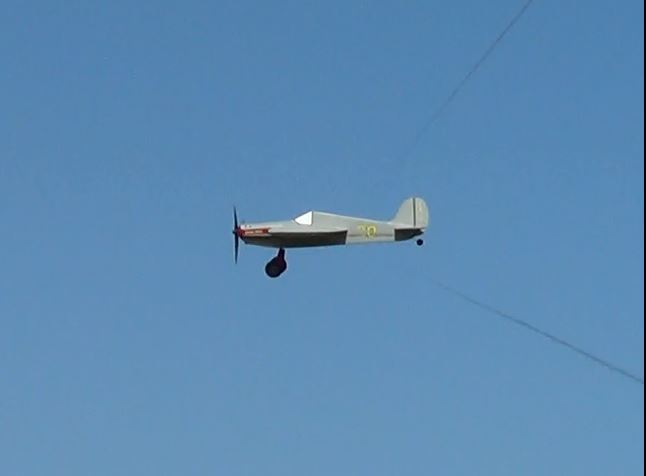 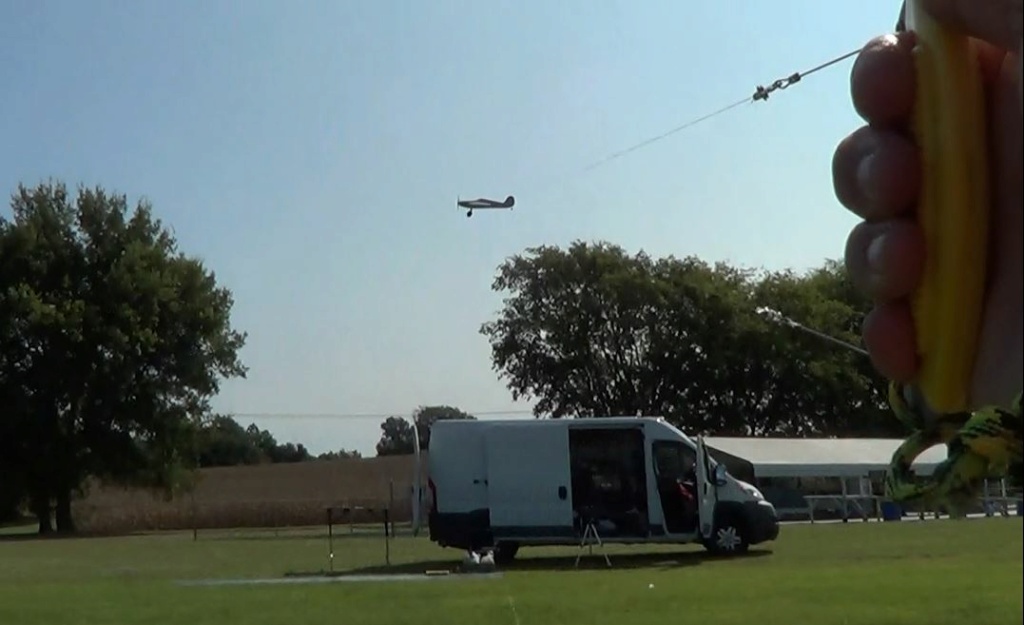 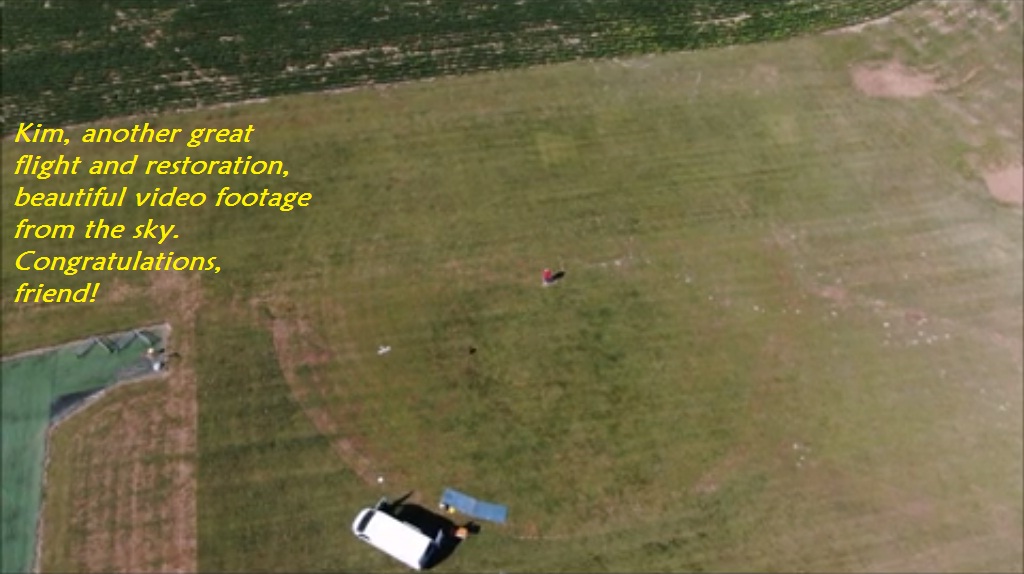 Bravo Kim! Has Uncle Wayne been present at this great air-show?
Who handled the drone while you piloted the Buster? You don't tell me that you just simply hauled the drone and parked it hanging there and shooting the vid while you were spinning in the circle??!!!

Wayne hasn't yet seen it fly.  It's getting difficult to get him away from his house, though he does say he wants to see Buster in the air.  The trees in his back yard have spread out to the point that there's very little room there now.  I'm gonna try to contact Randy, a farmer friend of his, who has a large, mowed lot a couple miles away, but the corn harvest was just started up, so he'll be super busy.

Still may chance a phone call and hope I catch him at a good time.  I'm taking Wayne his lunch on Thursday, so may also sneak a visit to check out the lot.

Yeah, the Mavic just minded it's self while I flew.  I launched it and got it aligned with the angle I wanted, punched "record", and then just trusted it's little brain to make it stay there...which it did.  It'll fly for about 18-20 minutes on a full charge, so there was plenty of time for my little 6 minute flights.

I've purposely tested it's "Return to Home" feature by letting it hover 'till the battery gets low.  Initially, it automatically climbs to about 300 feet (an adjustable value to keep it from flying through obstacles to come home), then flys over to it's plywood pad and lands within a couple feet of it's lift-off point.

I WAS relieved to see it still on-station when I stopped turning, as I have this irritating fear that it will think "Home" is back at my house, and go tearing toward Missouri!!!!

This stuff is pretty tame, considering all the times I've purposely put it in harm's way. 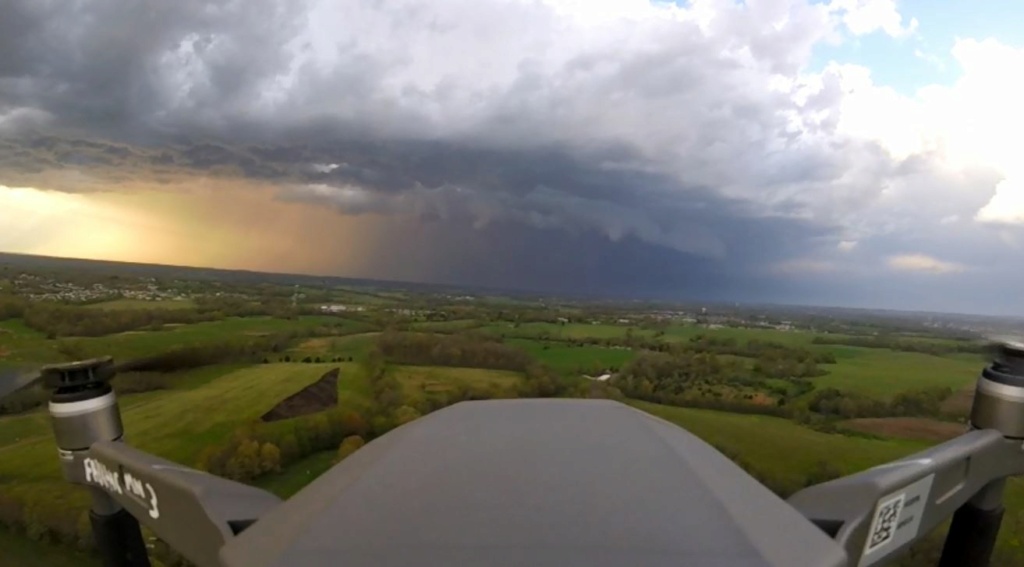 Your Uncle is indeed fortunate to have you as a nephew.

My best to you and Wayne.

As an afterthought. Got a call from one of my daughters this afternoon telling me about her brother and my son Mark and how special he is to her and our family. Mark is always there, whether as a son, brother, or uncle. You need help of any kind and Mark drops what he is doing and resolves the problem. I won't go into detail but his actions are prompt and unselfish. Mark shares many of your qualities.

As always, nice work. Very green right now. Thanks for posting those photos. I am particularly fond of the shots as seen from the FPV. It’s like I am holding the handle.

I am sure Uncle Wayne will be beside himself.

Thank you much, guys.

And thank you Bob, for the compliment.  Wayne stepped up at exactly the time I needed a male figure in my life.  It took a while for me to appreciate his working a farm all week, then spending his only full day off (which still had some side-chores to be done) giving me and his son Bobby a chance to learn about model airplanes. 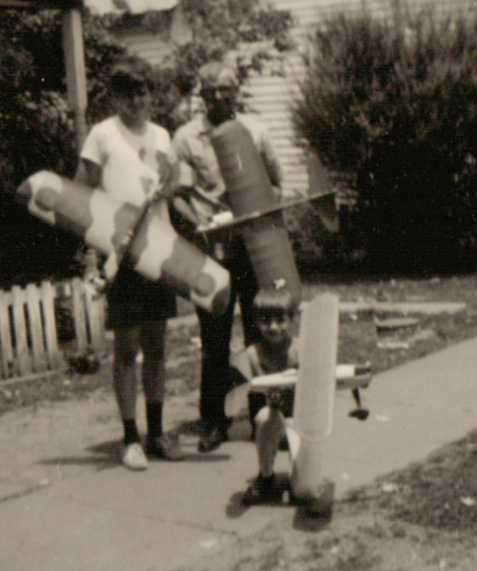 I WAS relieved to see it still on-station when I stopped turning, as I have this irritating fear that it will think "Home" is back at my house, and go tearing toward Missouri!!!! wrote:

Glad it didn't , yea it seem to bee going fast i thought to myself , ain't these bigens supposed to go slower ! ! Enjoyed the flight Thanks Kim !! Great footage from above .

Glad it didn't , yea it seem to bee going fast i thought to myself , ain't these bigens supposed to go slower ! ! Enjoyed the flight Thanks Kim !! Great footage from above .

Looks like you have the Mud Dabber in geosynchronous orbit up there taking video.