I wondered if anyone knows anything about this engine. 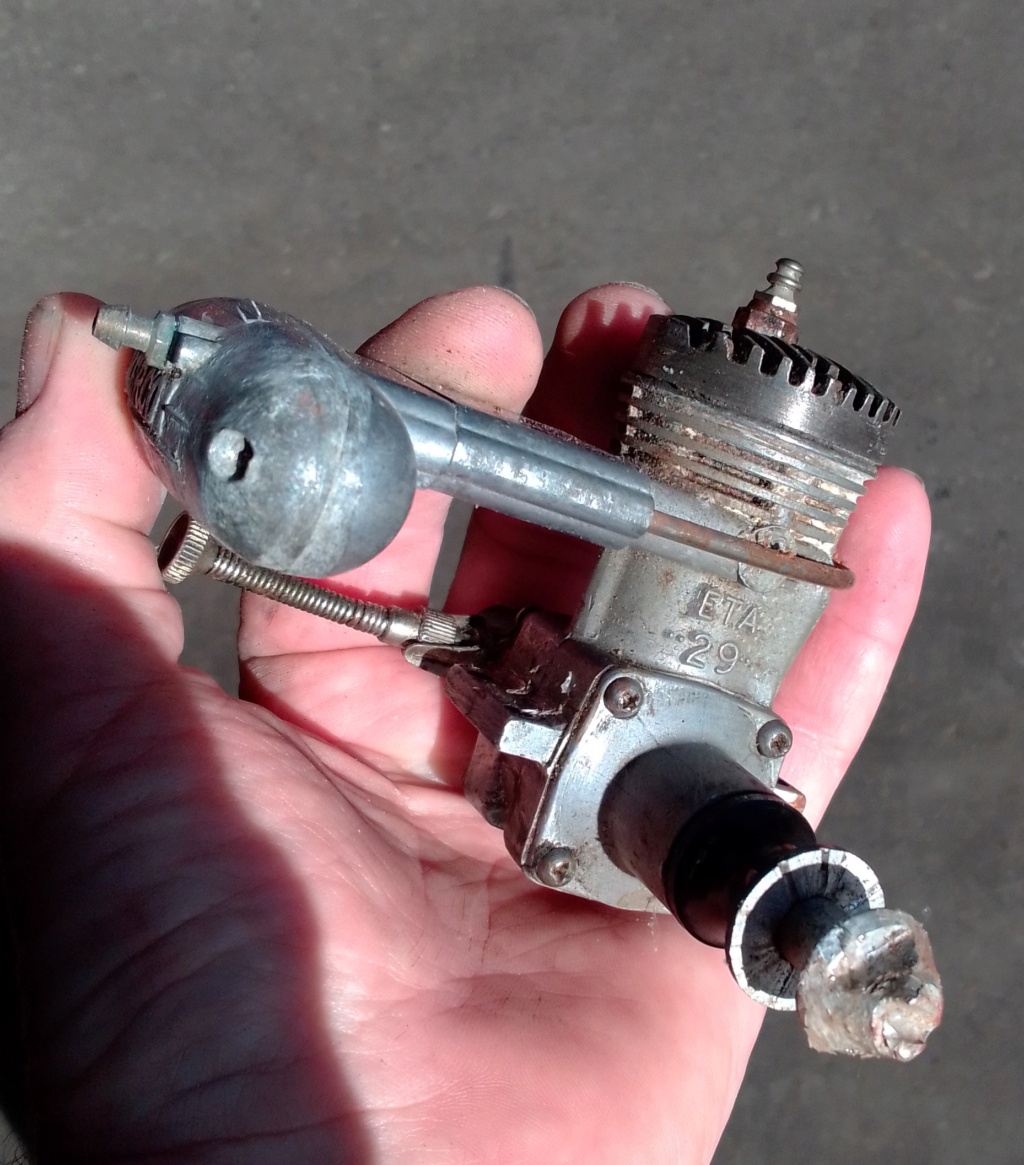 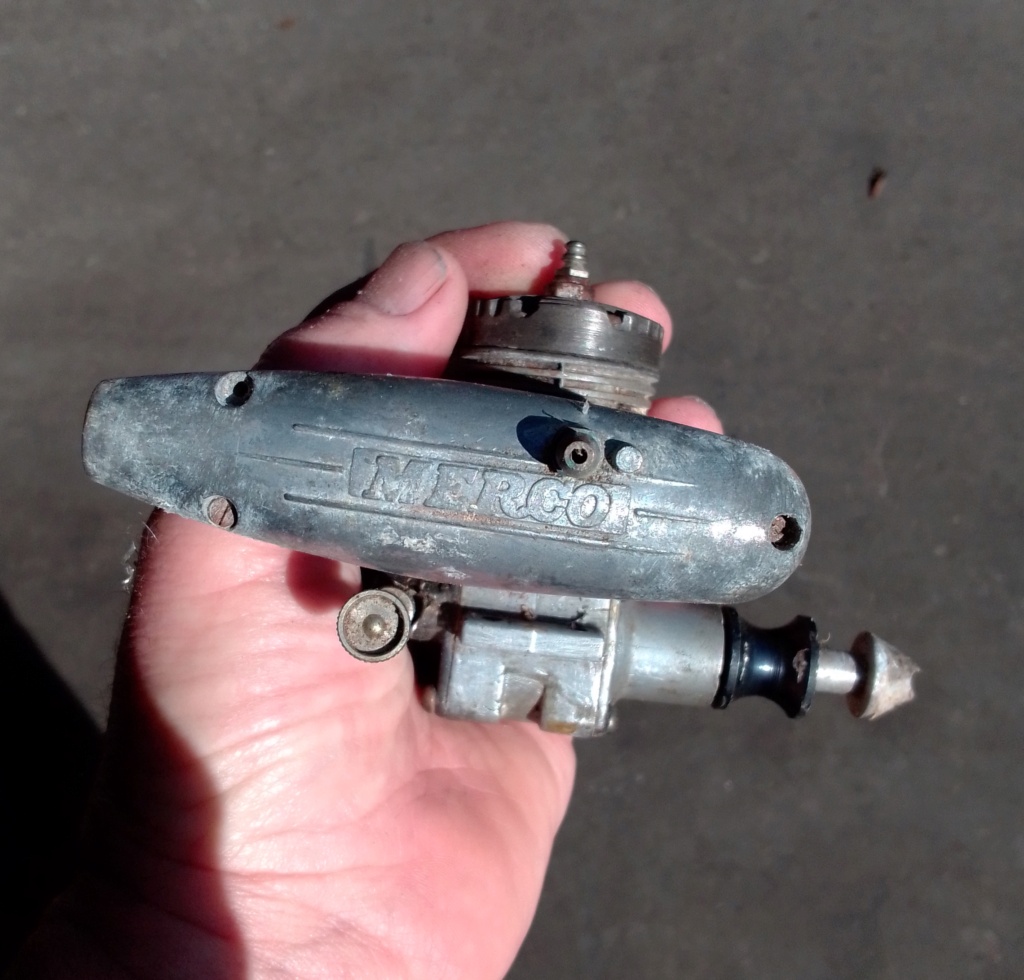 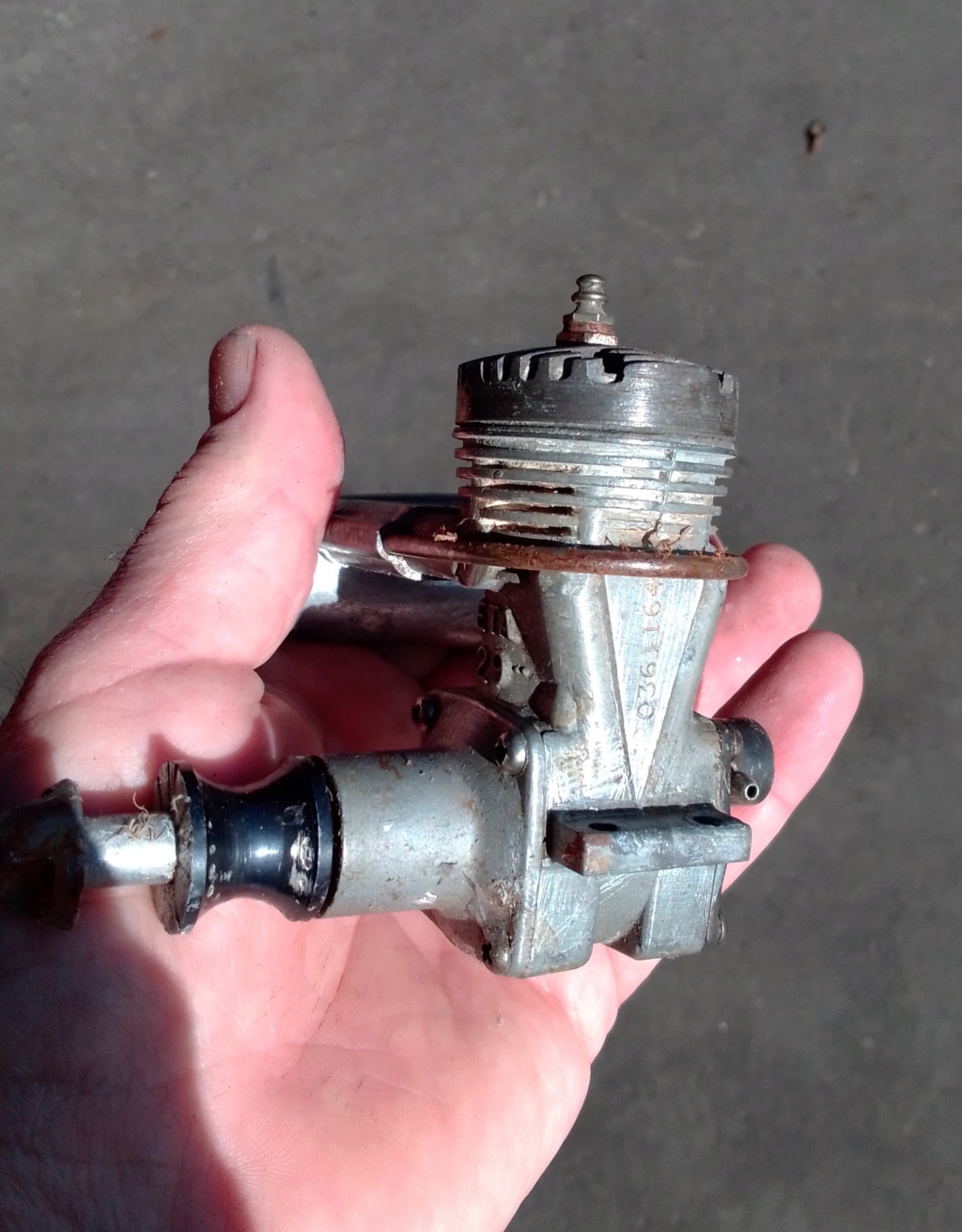 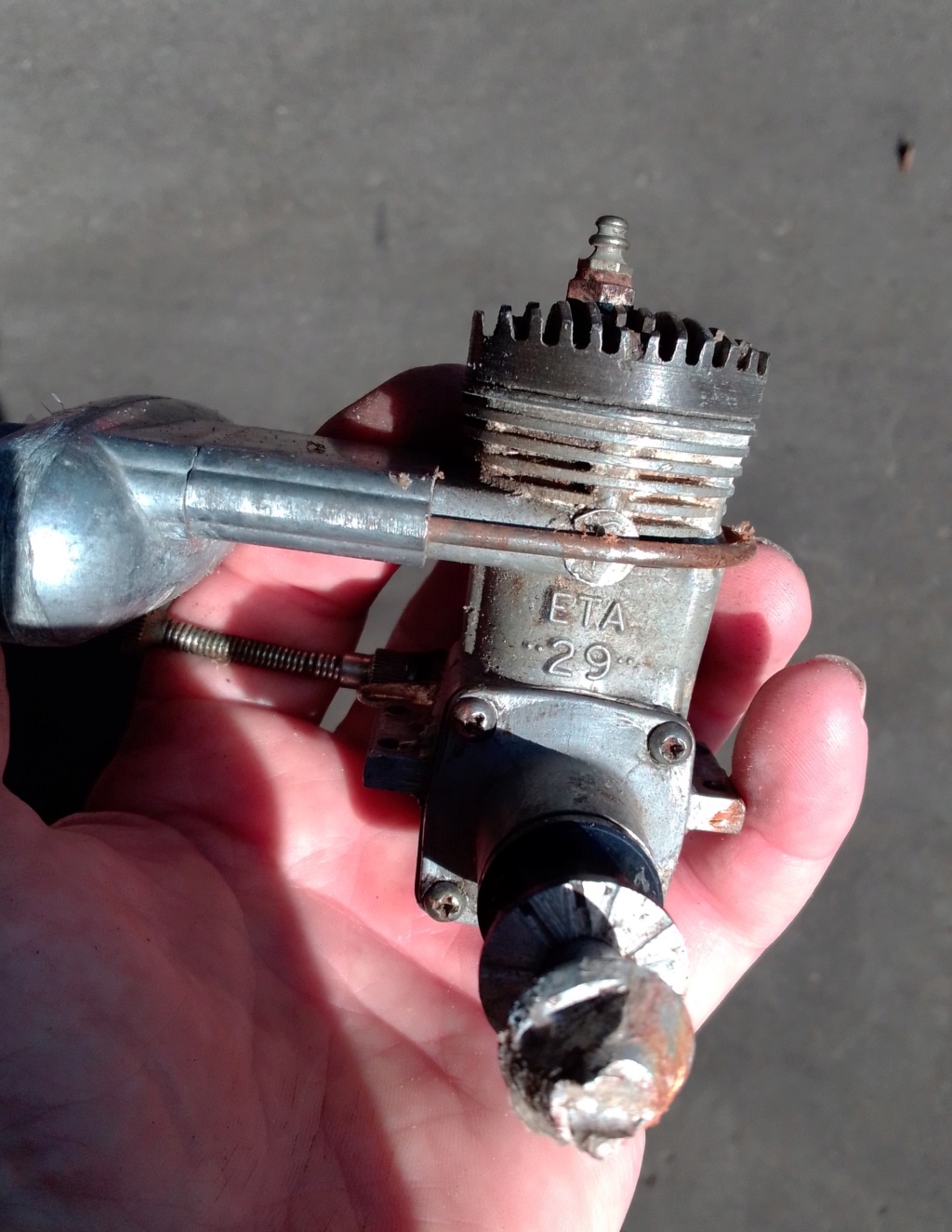 ETA .29 with a Merco muffler.  Also looks like it has an Enya NVA.  Clearly had quite a bit of early McCoy influence.

Had it given to me by a mate yesterday.  He wasn't sure where it came from, but believed his Father in Law may have retrieved it from a lake where a local RC club fly.  That doesn't really add up because it's a CL/FF engine.  Maybe someone had an old-time free flighter?  They were apparently popular for Team Race and Free Flight and from all reports were a very strong performing engine.  In fact, one report I read (Think it was Modelenginenews) said that they were timed for performance so much that they would run rough and spray fuel out of the inlet until you propped the engine to find the "sweet spot".  Also, I believe that the needle valve ran in a 2 piece spray bar, spanning the venturi in the open air.  I guess that means that the one piece Enya unit may be a little restrictive.

I had no real trouble dismantling it, but have opted to leave the piston in the cylinder to preserve the two (yes, two) piston rings.  Also, the crank bearings are locked solid, so they will require a good soaking.  Not keen on the A/Freeze boil due to the black anodised prop driver and head.  It's far from pristine, so will just get a tidy-up and test run.

The ETA was a B speed racing engine from the 50's. Essentially, it's a copy of the American speed engines of the times, like the Mccoy Red head racing .29 The engine was designed to swing a small diameter high pitch prop. It's essential to get the engine into the higher rpm range and above. Short stroked engines want to rev and not be lugged. The Merco muffler on the engine could've committed it's internals to a death sentence. I would not recommend using it.  There were a few versions of the ETA, one thing I would look closely at is the rotor disc behind the rear backplate. It's imperative that it's in good shape and reoriented onto the engine correctly or the engine will not start or it will start backwards. Some were phenolic and others were metal. Either way, it's the heart of the engine and they're difficult to locate if broken or missing. I see the needle valve appears to be a Enya. If the spraybar is passing entirely through the venturi, it's incorrect. These engines used a two piece needle assembly. A jet that screwed in on one side and a threaded locknut that held the needle on the other. Visually looking through the venturi, all you should see is the point of the needle. The engine will considerably be down on power using a conventional through the venturi spraybar.

Looks like a combination of McCoy, Torpedo, and Series 21 all mixed together with the NVA stuck on the back Rod.  Unusual and I love it.  Estimated Time of Arrival and it sounds like it would be quick. 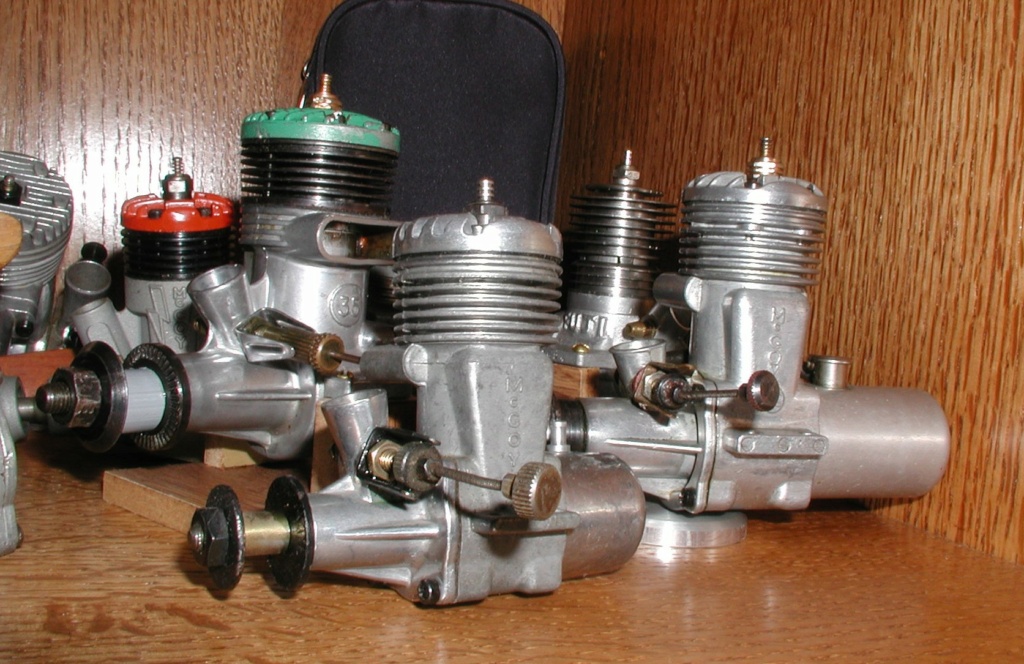 A picture please when you get it all cleaned up.  I would like to archive it.

Hi Rod
There is a bit of a write up on that engine in
http://www.modelenginenews.org/index.html

Sceptre Flight Model Engine Tests site have tests on the mk 1, 2 and 3 29 models.

@Davenz13 wrote:Hi Rod
There is a bit of a write up on that engine in
http://www.modelenginenews.org/index.html

Sceptre Flight Model Engine Tests site have tests on the mk 1, 2 and 3 29 models.

Thanks Dave. I've been through the Modelenginenews info. It's my go-to site for odd stuff. I agree with your interpretation of the date. I'm sure I read that it would be #36 for the month.
I also read the Sceptreflight reviews- interesting reading.

There has been some discussion about the engine over on Stunthangar. While I agree with Ken that power will be down with the spray bar configuration, others have said that it will probably also make the engine more friendly if I'm not looking for "race speed" runs. In it's original form, it was built for speed only and it would not have performed well at all in stunt. The extra restriction in the venturi would no-doubt help fuel draw and consistency.

I have managed to get it dismantled. The bearings were locked but a soaking in old fuel freed them up and they feel good, so I will go no further. I've left the piston hanging in the bore because I don't want to disturb the rings and risk a breakage. The innards look pretty good. No real wear to speak of. I'm waiting on some new BA screws for it. I'd be curious to see if McCoy 29 gaskets fit. The engines look very similar. Last step will be finding or making a new prop sleeve-nut, quite necessary if you note the pictures. I'm happy that it will run fine. The rear disc is the fibre type and looks good.

No problems Bob, I'll put up "after" pictures once I'm done. It's not entering a beauty contest as it's already a little rough around the edges. Looking for something a little different to get running. The only rear disc intake engines I have are diesels.

Interesting engine Rod Hope it run good for you .

Looking at your bottom picture Rod, I thought at first that it was a caged nut, very unusual and I only have one engine so equipped. But looking at your other pictures, it looks more like the prop nut that's on some of my old Rogers sparkers. 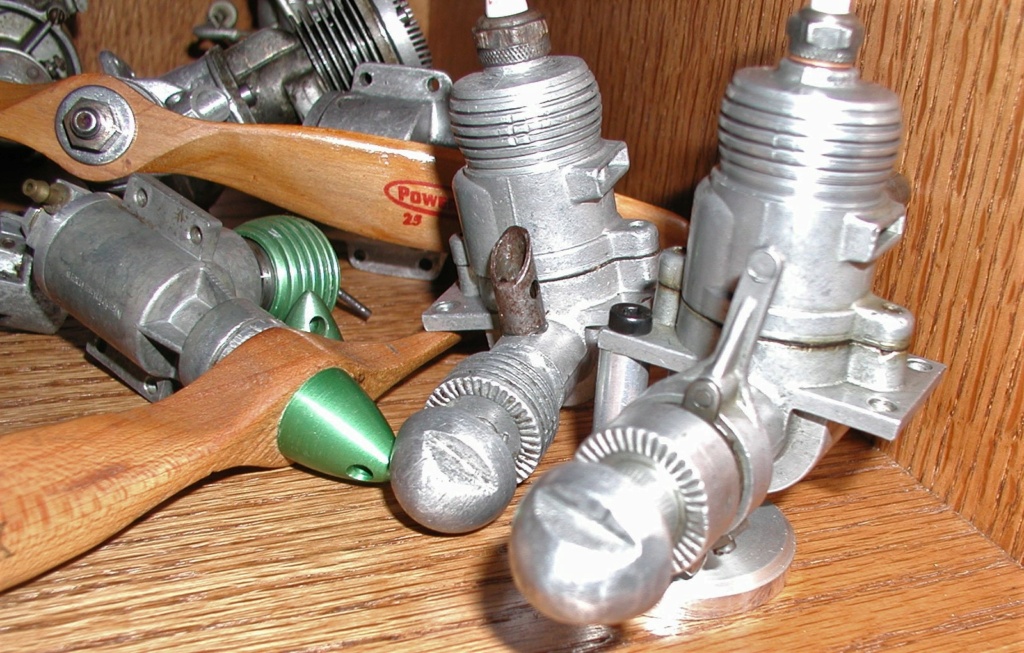