Good point Rod, and I wasn't aware of that.

I keep the Nissan in the remote garage and generally lock it as the garage door opener is always active (not keyed) and can open the attached to the house two car garage door. This gives anyone direct access to my house day or night. But I don't always lock it, so that is something that I will have to look into.

Coxfledgling wrote:Anyone come across a battery that has changed polarity yet ?

Yes. Got called out to a customer who had removed the battery to recharge it. When he refitted the battery it blew an alternator fuse. The diodes in the alternatore were allowing too much current flow in the wrong direction.
After a while I discovered that it was charged in reverse. I didn't even know that could happen but I took it to my local battery guy who confirmed that he'd seen it before. Fully discharged and recharged it and it was all good.

The easiest isn't usually the best. If the drain is something like a radio amplifier, it may not turn on until some time after getting power. The proper way to test this is to measure current and pull fuses one at a time to find the system causing the load. Alternately, you can measure voltage drop across fuses, but you'll be looking at millivolt or smaller values.

Once I knew there was a problem and which circuit it was on, the internet quickly lead me to a couple common culprits.

Just a few days ago, mate with a Triumph Trident said his battery had gone flat and when he tried to connect another battery it sparked.
He assured me he had the connections right and everything on the bike was switched off. I had a fair idea what it was. The Zenor diode, used to divert excess charging current away from the battery, had gone closed circuit. Disconnected diode, connected battery, no more spark. I have struck this issue several times before.

Back in the day many flat batteries were caused by glove box and boot/trunk lights not not turning off when shut.

That is a thought. The Nissan doesn't have a glove box, just a couple of unlit cubby-holes. But it does have a trunk light, I'll pull the lamp and see if that fixes it.

Coxfledgling wrote:Anyone come across a battery that has changed polarity yet ?

Yes.  Got called out to a customer who had removed the battery to recharge it.  When he refitted the battery it blew an alternator fuse.  The diodes in the alternatore were allowing too much current flow in the wrong direction.
After a while I discovered that it was charged in reverse.  I didn't even know that could happen but I took it to my local battery guy who confirmed that he'd seen it before.  Fully discharged and recharged it and it was all good.

I use to buy batteries from a recycling place and I noticed one day i was getting a battery and the guy ask witch side the positive was on the he hooked the charger to it and marked it so it could have went either way . I found that interesting

Most of you probably know what a "Swan-style" disconnect is.. 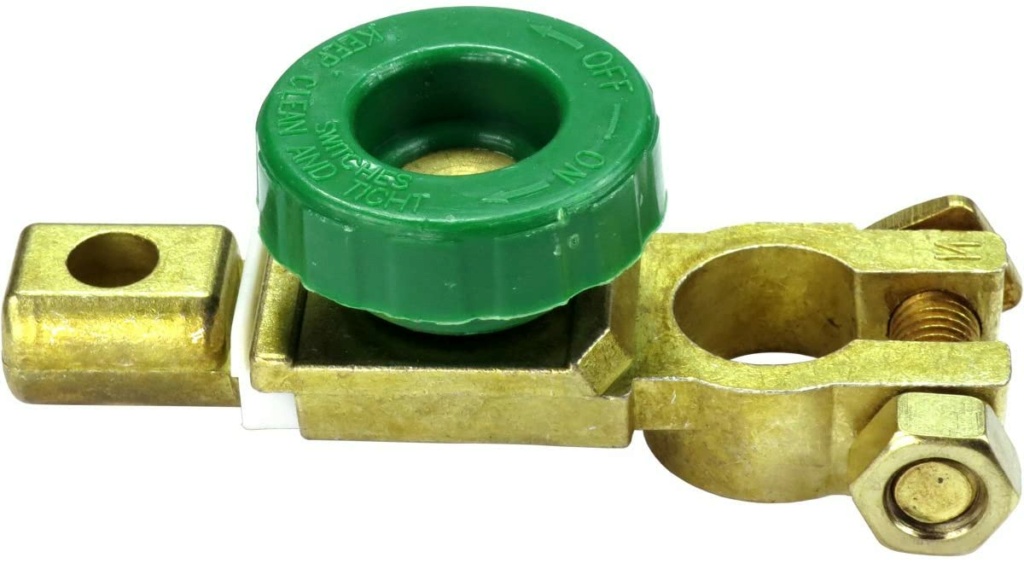 It should be mentioned.. that disconnection from a modern motor-vehicle harness will require resetting any preset radio stations.. as well as some other functions.. such as would be necessary if changing/swapping-out the battery itself.

The Swan disconnect could come in handy "if" as has been stated by others here; their vehicle's electric system encounters a "drain" from an unknown source.. which depletes the main battery from being able to start the engine. Tracing a dead-short in your average 12V neg. grounded automotive electrical system can run into several hours of shop-labor.. at their hourly rate.. So.. it may be more economical to raise the bonnet.. and turn a knob.. and manually tune the radio station.. until it's time to spend the $$ to trace the short.

Back to Car Batteries.. the "Ever Start" (Walmart brand) has actually been highly rated. 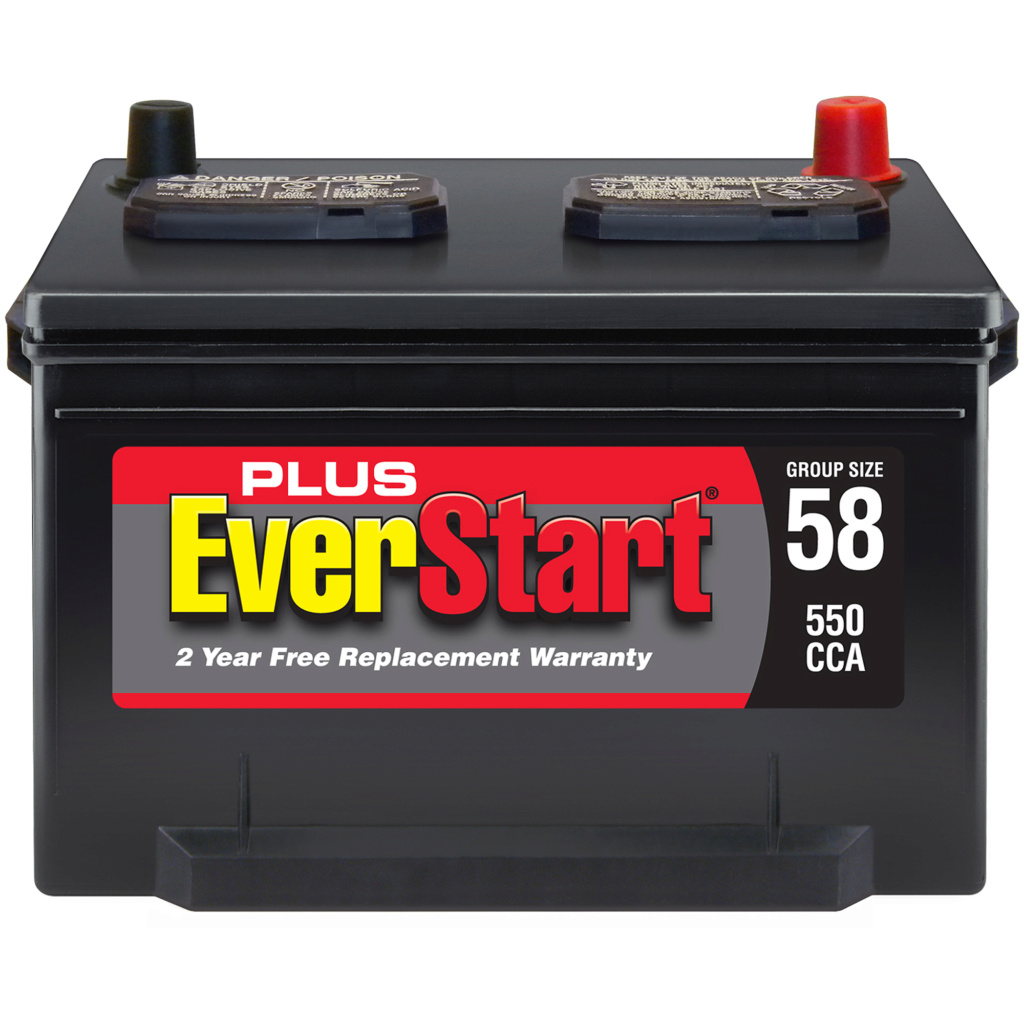 I purchased an "Ever Start" Marine (deep-cycle) battery several (10?) years ago, for the soul purpose of providing 12VDC for inverters (12VDC "in" 110VAC "out") for when we lose power here at home. I typically power-up the CATV router.. and check for a signal. Most often I've found that the data lines are uninterrupted. The LED light-bulbs are great in this scenario.. because an average room can be lit using one table lamp.. at far less wattage than the tungsten lamps that they've replaced. This reserves power for operating/receiving broadcast radio/TV news updates.. not to mention powering-up a home office.. if need be.

My Deep-cycle battery is similar to the one pictured below; 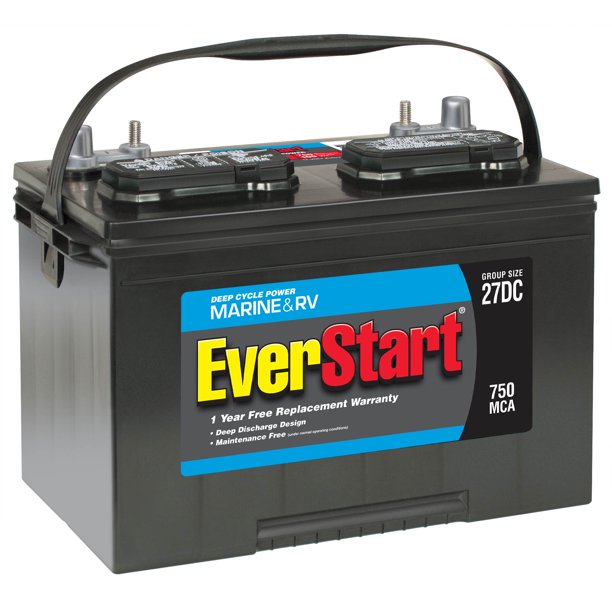 "time to fill the buckets.." My main concern in freezing weather is heating our house. I wonder if my boiler-circuit (forced hot-water/oil-fired) can be wired with a "pigtail" for connection to an inverter; to be used only in the event of power-loss?

What I worry the most about.. is our water pipes freezing; due to a prolonged power-outage in sub-freezing temps.

We lost power once; years ago for several days, when hurricane "Irene" hit the New England area.. but it was in the warmer season. The swimming-pool water could be used to flush the toilet and we could cook on the gas (propane) grill outdoors.

We've put-off the cost.. betting-against the risk.. but it's just a roll of the dice.. isn't it?