Plus one more on helping the young man

…. Plus I like reading your stats and data…. Keep putting it up compadre ….

This is just great.
Helping each other!!!
You are doing a grand job Mr Speed!
If I may help as well?
I am a very light builder and purposely so the planes fly nicer.
If you don't mind me saying, your fuse bottom seems to be 3mm thick.
On a tiny plane like that, 1.5mm is plenty.
Only trying to help.
Don't despair...it will not take long to make a new one.
Keep it light.
Also when you make a fuse bottom and top, the wood grain should fall at 90% to the fuse length.
The opposite to how you have it.
This is to give more strength.
When you squeeze the fuse or hold it too hard ready to launch it, you cannot crush it because of the wood grain direction!
Keep at it mate.
Woody.

Thank you for the thumbs up Robert and Eric, happy to see Tobaiies .020 speed projects!

Thanks for the kind words and the support!
There's always an error creeping in…But I think that's where you learn the most

The fuselage sides are made of 1.5mm balsa, the top and bottom are 1mm.
Maybe I can finish it today in a night shift and test it tomorrow

Found out today the Kamtechnik prop plate adapter works with the carbon Cam 4.7x4 speed prop.
Has a snap fit for precision centering, note the stud bolt has a end point socket head uses a .050
allen wrench to lock it down and to avoid seized threads. The grade #8 black oxide bolt sits snug
in the threads with less slop than the stock bolt that came with the valentine .020 spinner nut.

The prop as is should work with the .020 engine with it's constant pitch blades, lower weight and
less bulky at the hub compared to the APC 4.1x4.1. Cam 4x3 does not work with the thrust plate adapter.
The Cam 4.7x4 certainly as a cut down speed prop will do 100+ Left alone will generate notable thrust. 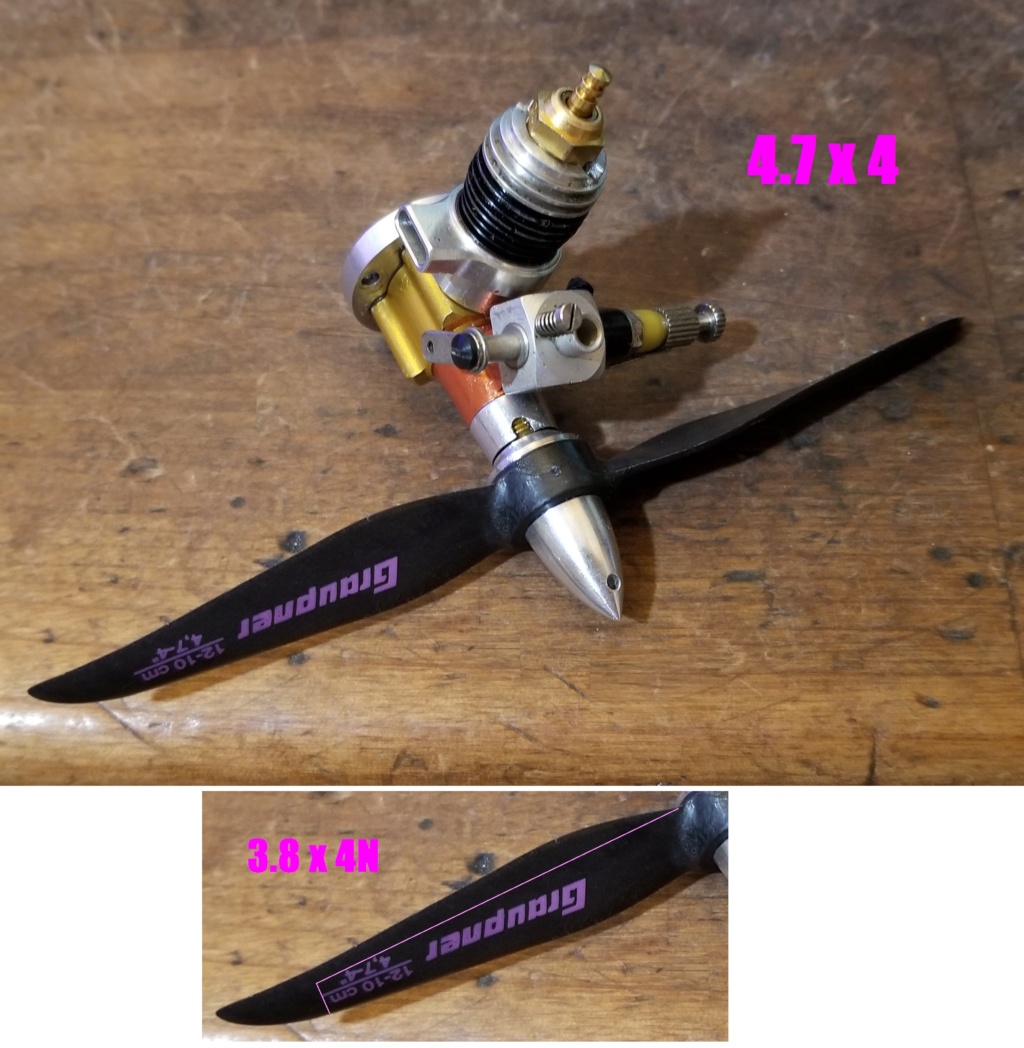 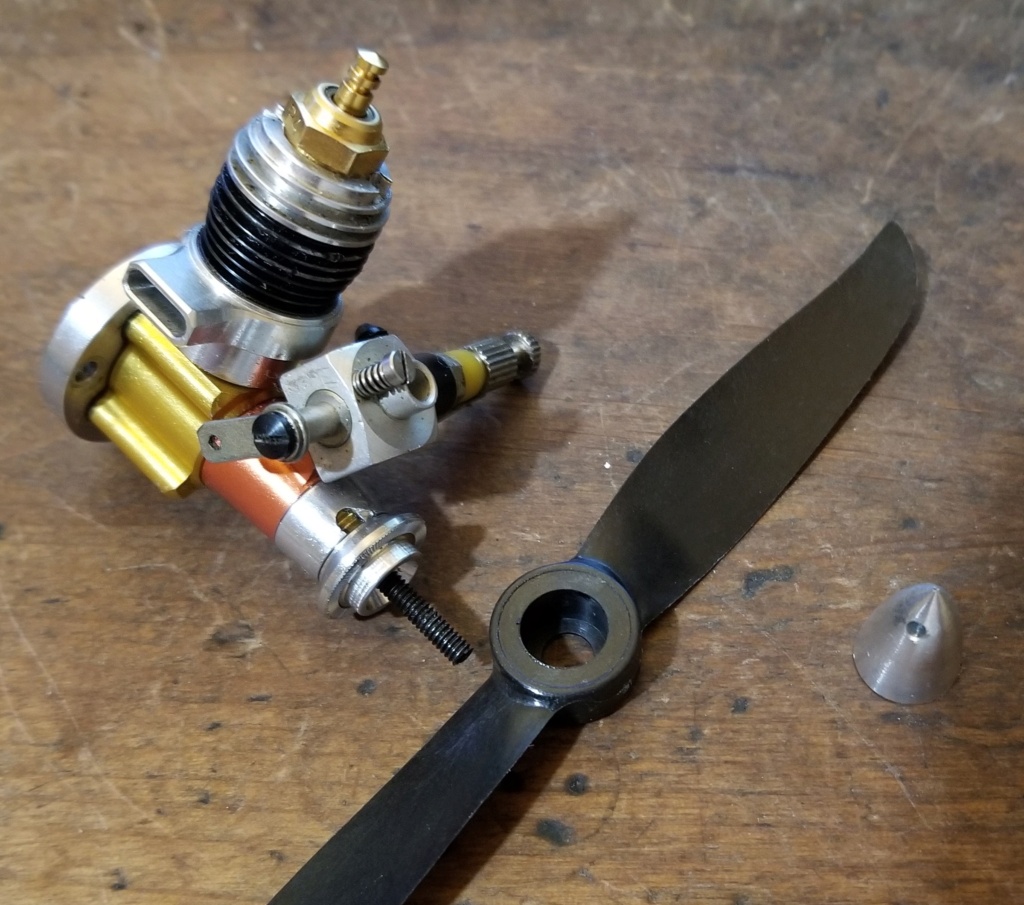 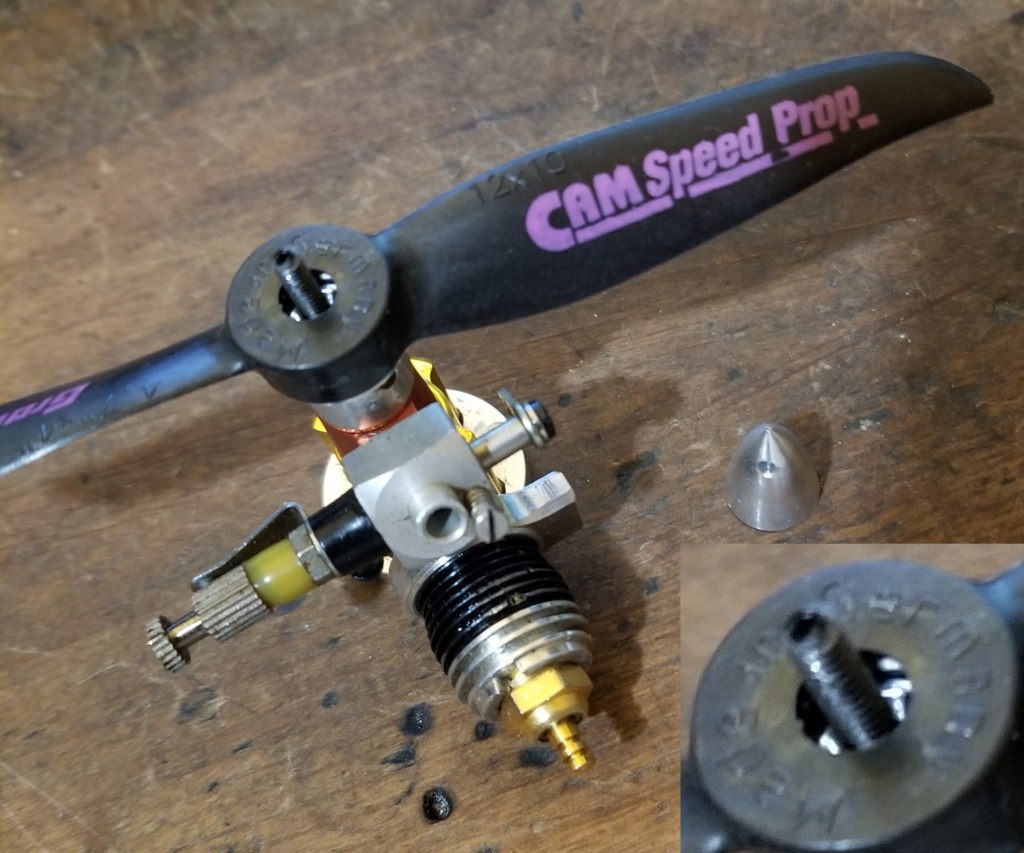 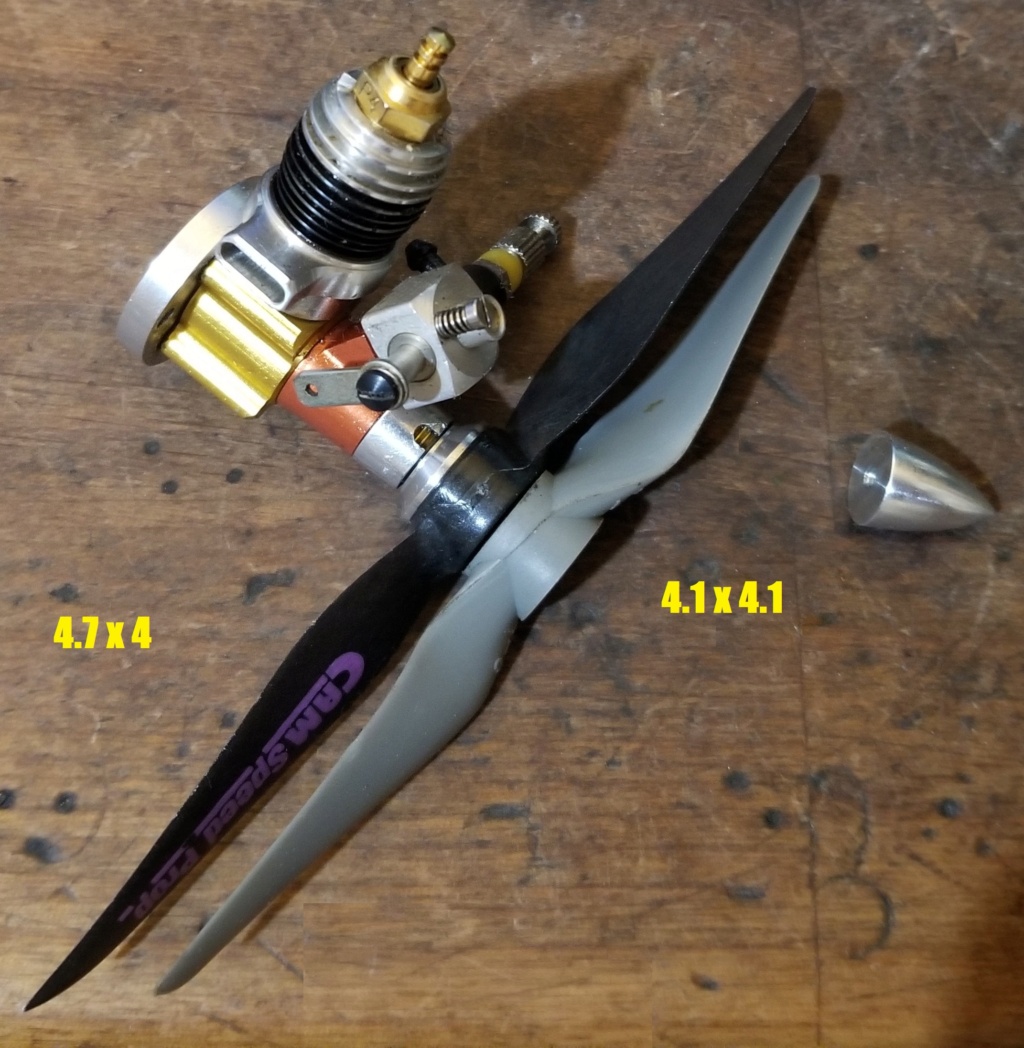 Had some time to build again. I still have to get the wing ready and hope for the first flight on wednesday. Nice to see the development of the models, seems a bit faster than at the beginning. 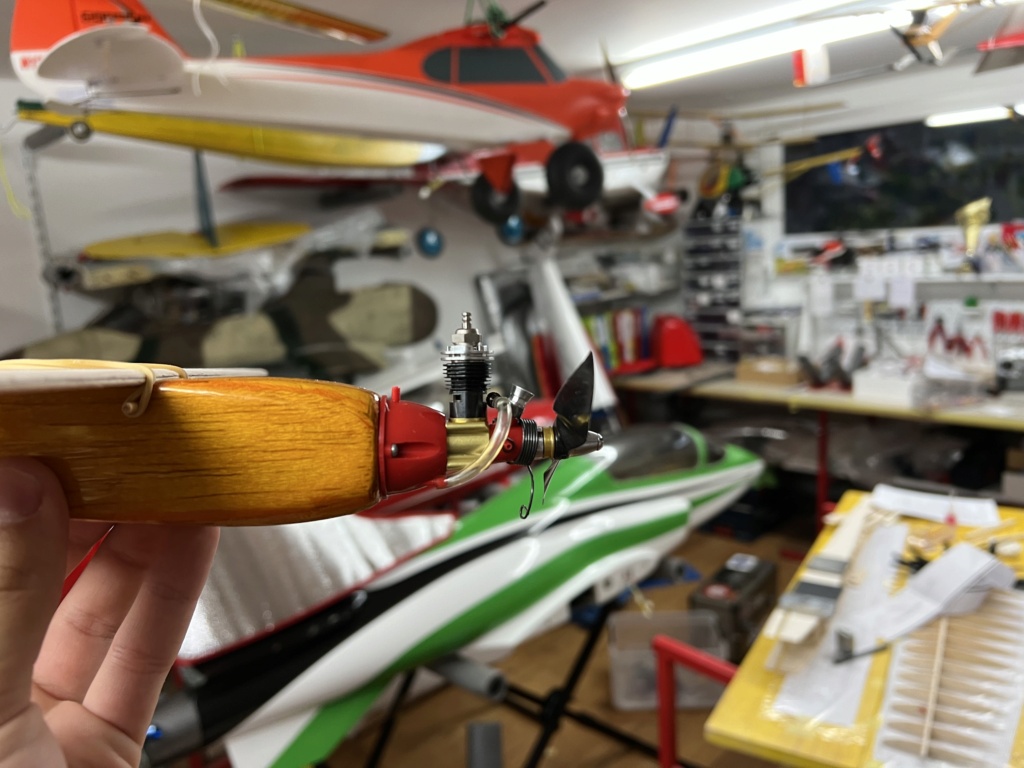 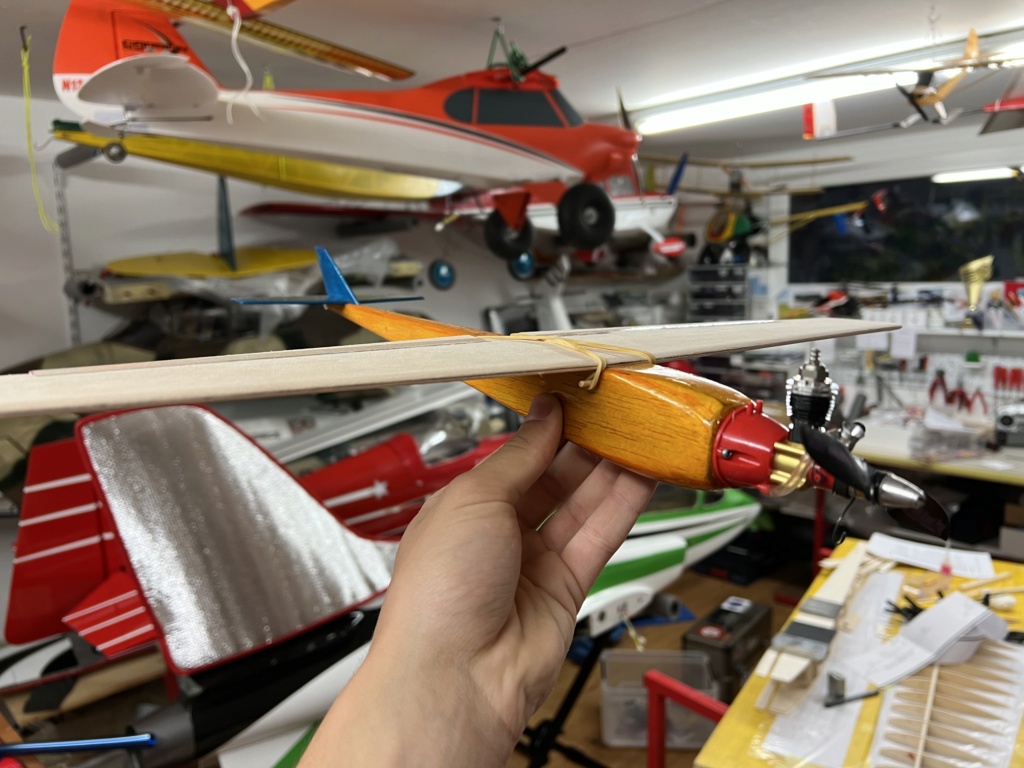 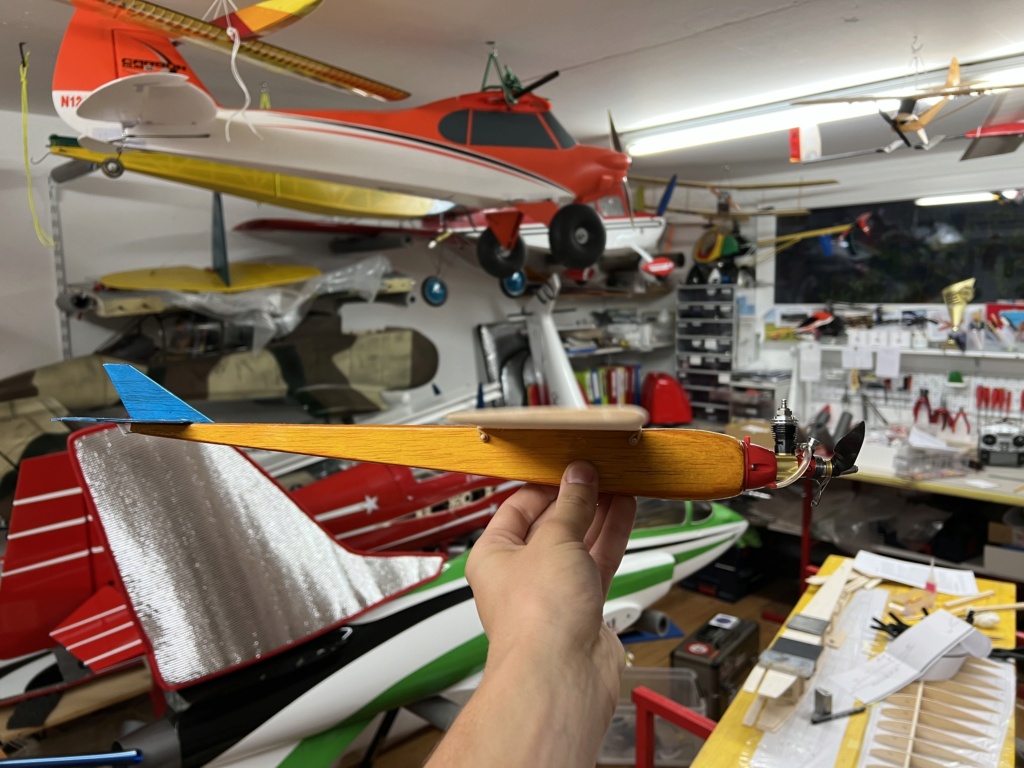 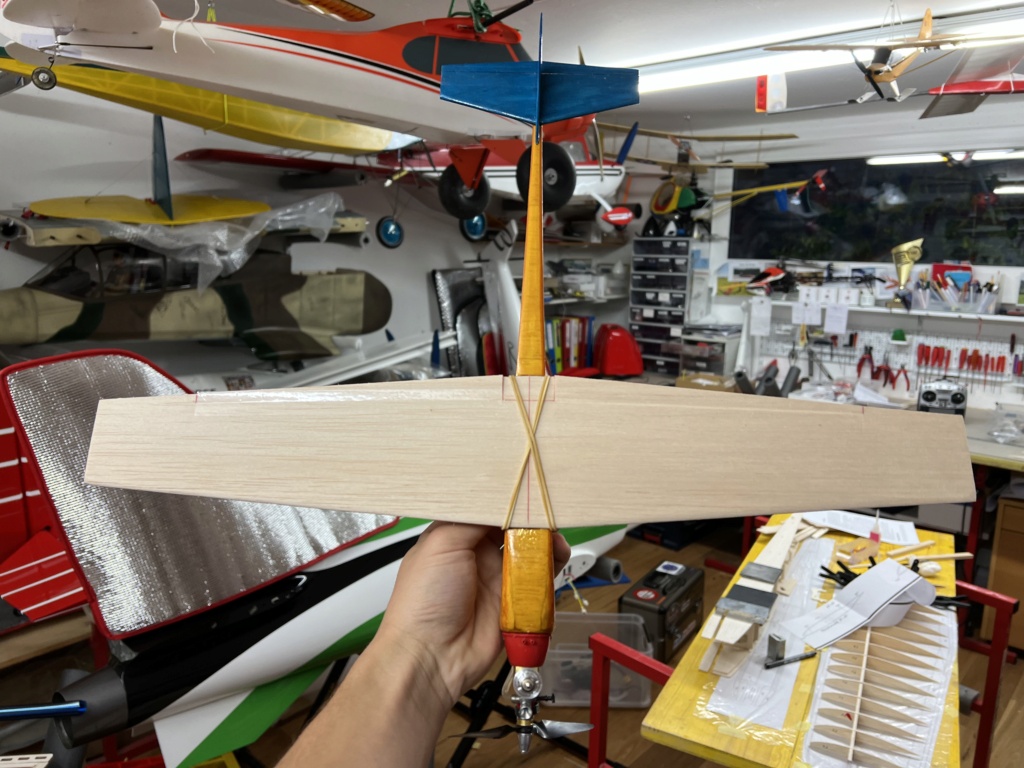 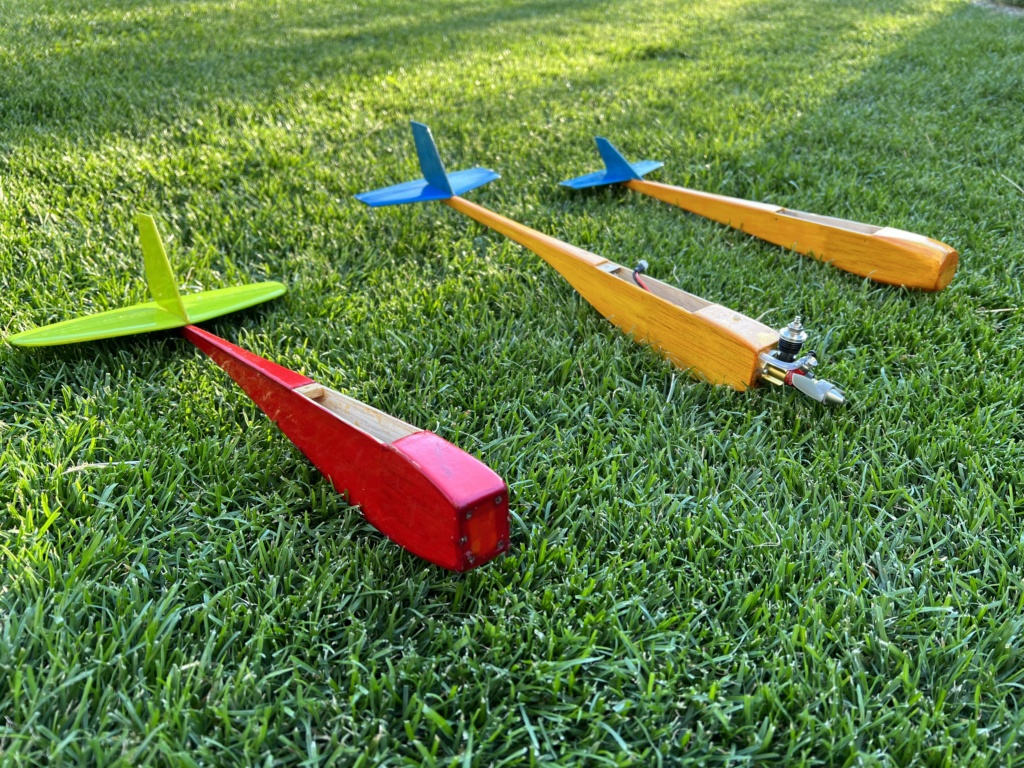 Thank you for posting the pics!

All right, I finished the model. Will test it tomorrow, I'm excited to test the model in combination with the new glow plug. I'm quite happy with the final result. 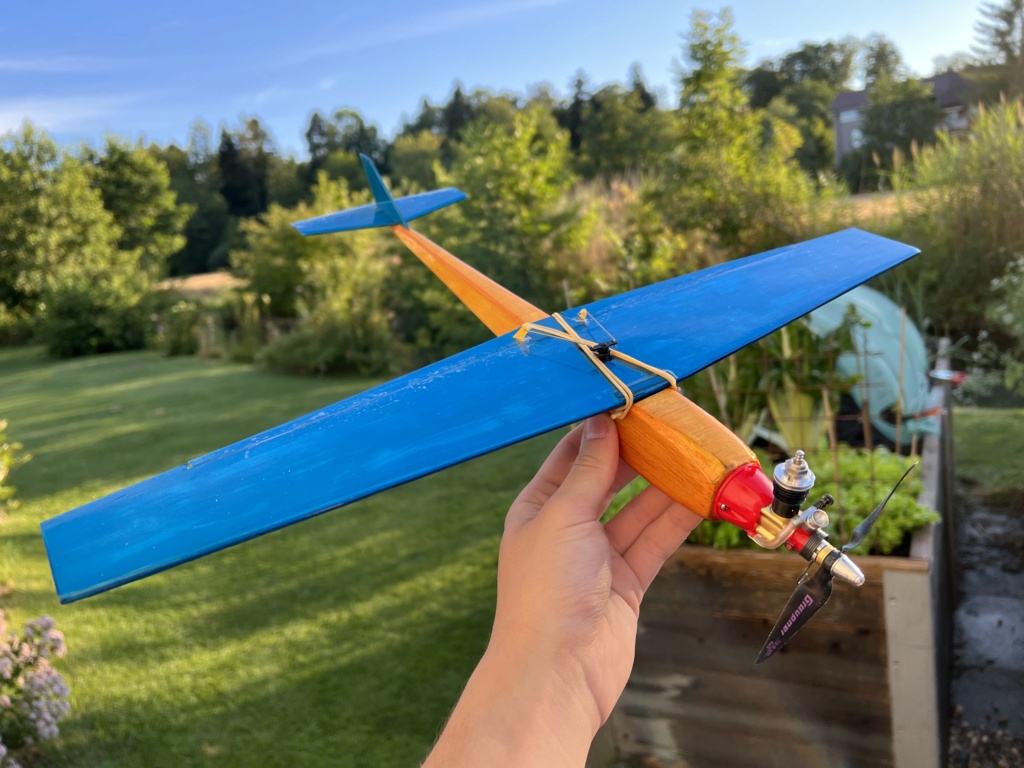 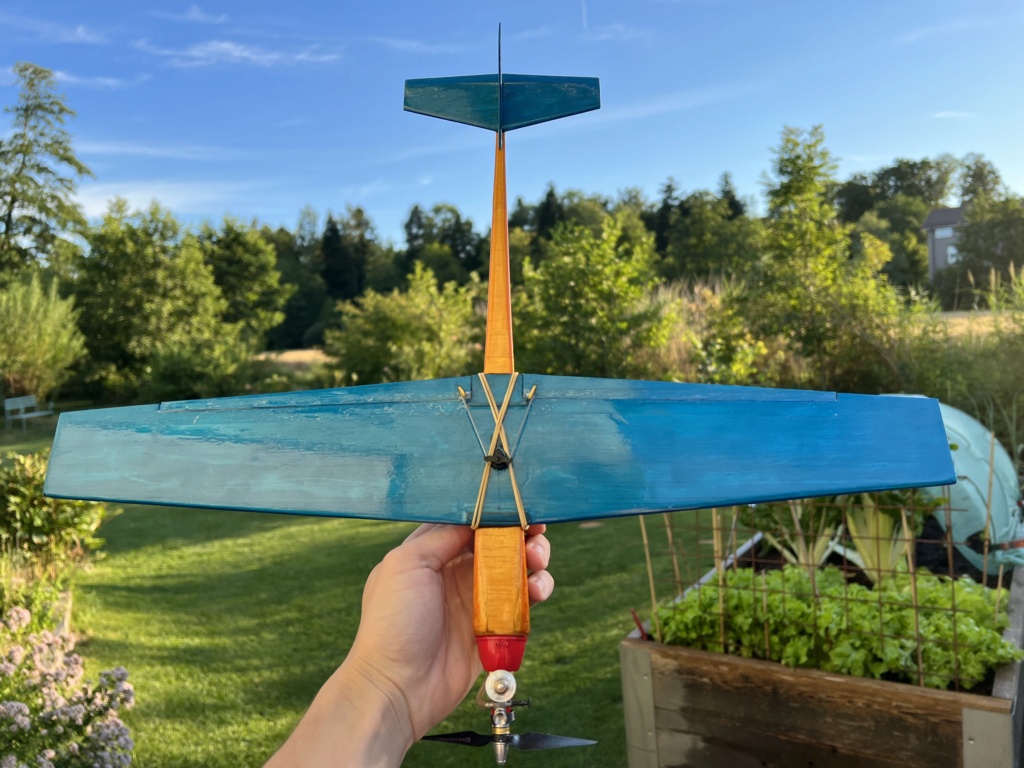 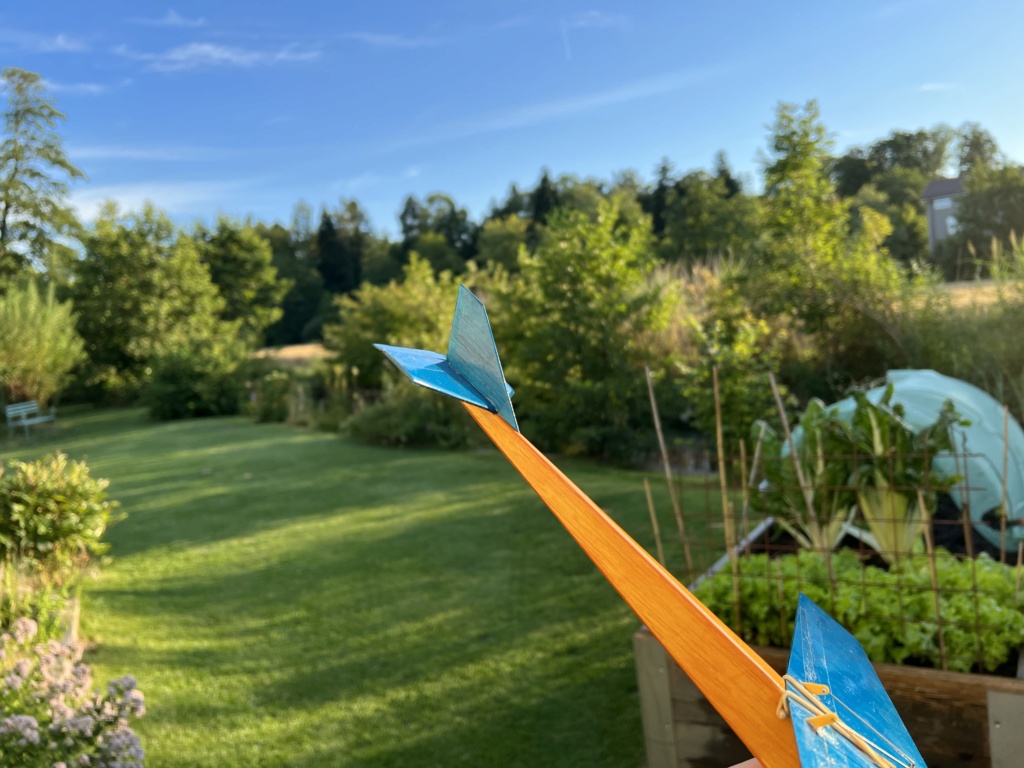 Very nice, good looking speeder, how is the weight with gps?

Each build / tested shows a path to the next honed down version to fly faster.

I'm not that excited yet. The flight characteristics are ingenious and have improved.
But I will probably make the wing screwable again to reduce the air resistance of the rubber bands. I will also test the hotter glow plug, I'm not sure if it even had more power than with an original one.

Nice flights especially the first one, but the 020 TeeDee is capable of much higher rpm-s with the stock COX head..

I am also having ambivalent experience with Kamtechnik head only on 020 size TeeDee-s ..while this head blows the door off the 049 and 09 size TeeDee-s, it brings my 020 with the stock 3-bladed COX prop to peaks only near 21...22k, while with the stock COX head my 020 TeeDee spins the stock 3-bladed near 25k on the bench and near 27k when unloading in the air.....I tried adding more gaskets under the Kamtechnik head but it did not improve the output..maybe Brad aka 1/2A Nut can chime in here with a to-do to let the Kamtechnik head do the wonders it does on larger COX engines..?

For the .020 I use hot plugs and 25% nitro.
What is the ready to fly weight of this version?
I oil the plug threads and adapter threads to help seal from leaks when assembling.
The stock APC 4.1x4.1 will need some backcut or can try extra head shims.
I like rubber bands to protect the wing in a crash or bad tumble.

Brad I used medium hot turbo plug, 20% nitro and 2 then 3 shims, and was never able to approach the tpm-s with stock COX heads...strangely, the Kamtechnik heads are superb in all larger COX engines, better than Nelson..

How did 1 shim do?
Any tests with 2 blade props?

Brad I have only the COX 2 bladed props for 020 size engines (my APC-s are larger)  that the TD spins way slower than the 3-bladed. So my benchmark is set by the 3-bladed and I compare the heads using that prop only.

balogh wrote:Brad I have only the COX 2 bladed props for 020 size engines (my APC-s are larger)  that the TD spins way slower than the 3-bladed. So my benchmark is set by the 3-bladed and I compare the heads using that prop only.

The adapter was set up and tested for the more widely used Cox 4.5x2 prop.
The compression was adjusted to serve with one head shim as many folks
may not have spare shims to add.

Absolutely did not give up or settle with numerous prototypes tested until the adapter
was honed to make more rpm than stock. Same engine and prop saved for only testing.

I have now made the wing screwable.
RTF weight is 90g. 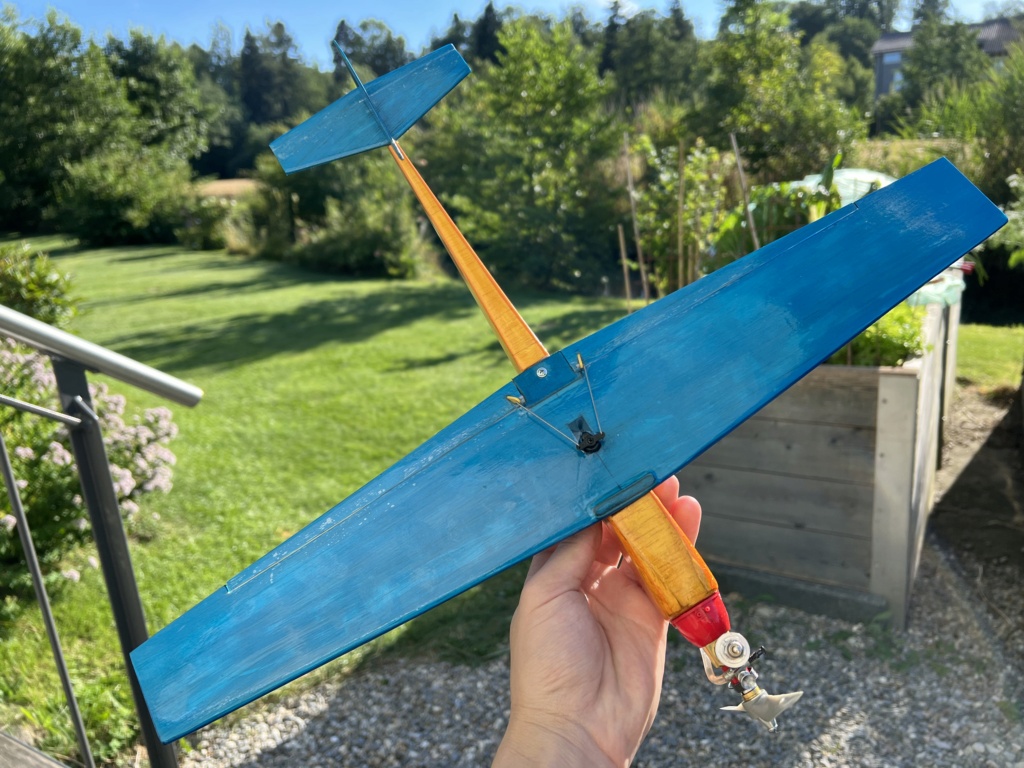 Tobaiies, is the wing made of hard balsa plank that you sanded to an airfoil? Did you use any template or just sanded it by instinct?

That 90 grams is impressive.. way below the 160 grams that our idiotic drone laws set as the max. weight of a plane without mandatory registration, insurance, airfield permit etc..all my planes are heavier than 160 grams so I fly as an outlaw..

Brad I suppose the 020 Kamtechnik head was designed with consideration of the larger volume of glow filament cavity of a turbo plug, than in a stock head? The cavity in a turbo plug seems to have much larger volume than the COX head..the dome in the Kamtechnik head is flatter though, so the combination of the two volumes i.e. cavity and dome may end up in identical combustion chamber volumes in the Kam and COX heads?

Yes the volume from the glow plug element hole makes an impact.

Some glow plug designs have larger holes than others, some are really bad.
I use OS Gold Plugs to insure good elements and conductivity for starting.

Key is to ensure you have a good seal and the seat for the glow plug
has conformed to the plug manufactures design. I double check after
the engine has been heated up from running.

Sometimes the element needs to be plucked up out of the hole some.
I use a needle to carefully raise it up. 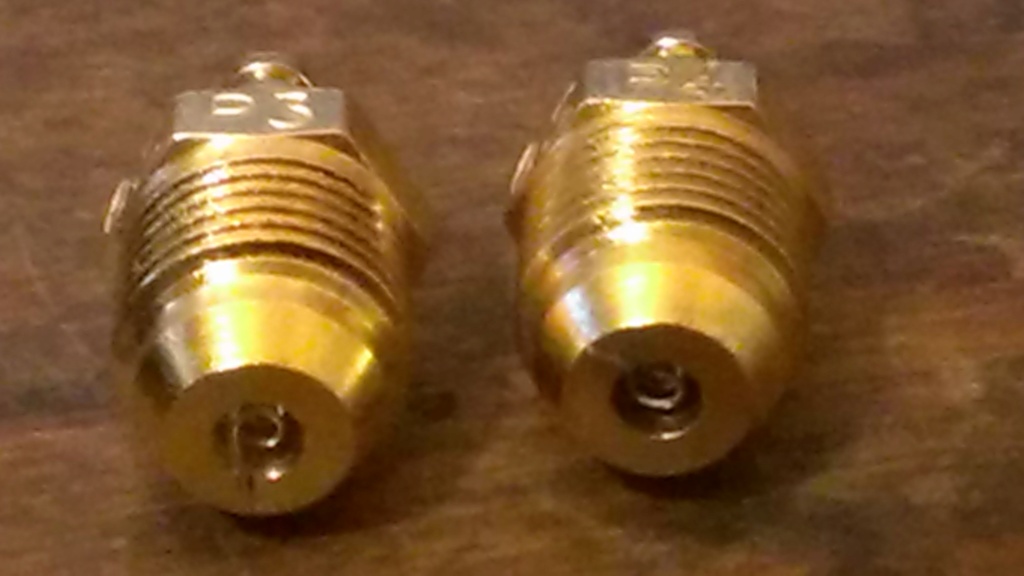 Exactly, the wing is made from one piece of balsa and simply sanded down by feel, but with a few auxiliary lines.

I edited the APC 4.1*4.1, you can clearly see the difference!
At the end I tested the Kamtechnik adapter with a hot glow plug. And this time the engine really has even more power than with the original head!

I think those are the fastest flights so far.
I tried to measure something with the GPS but the measurements seems wrong. (I think 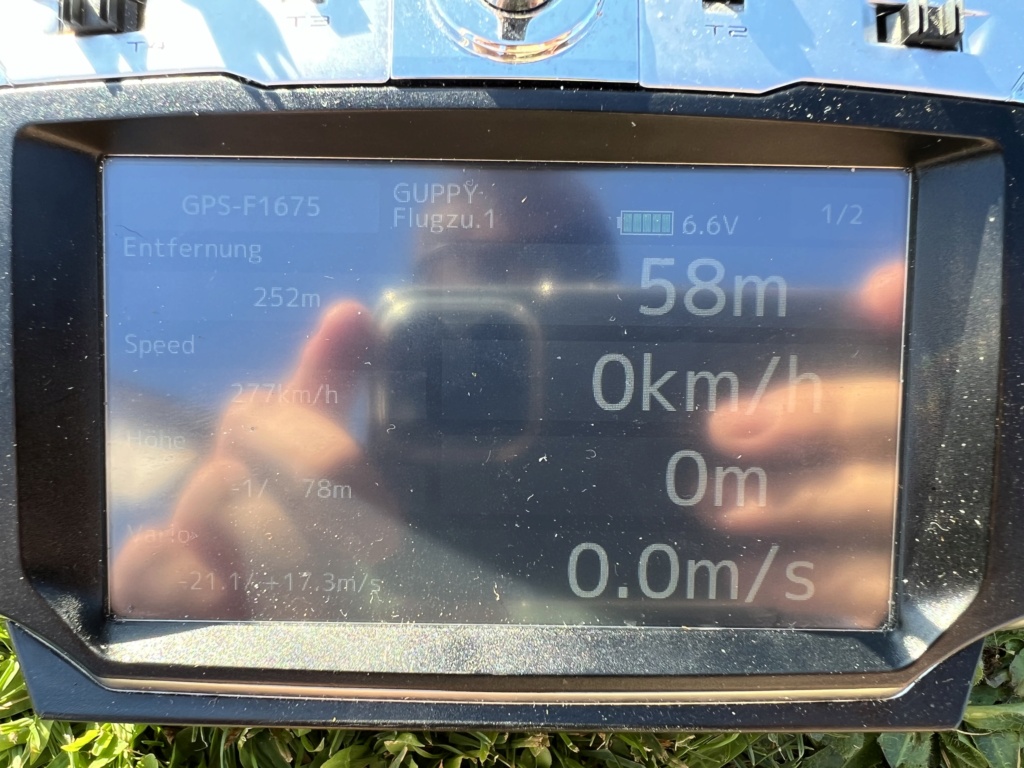 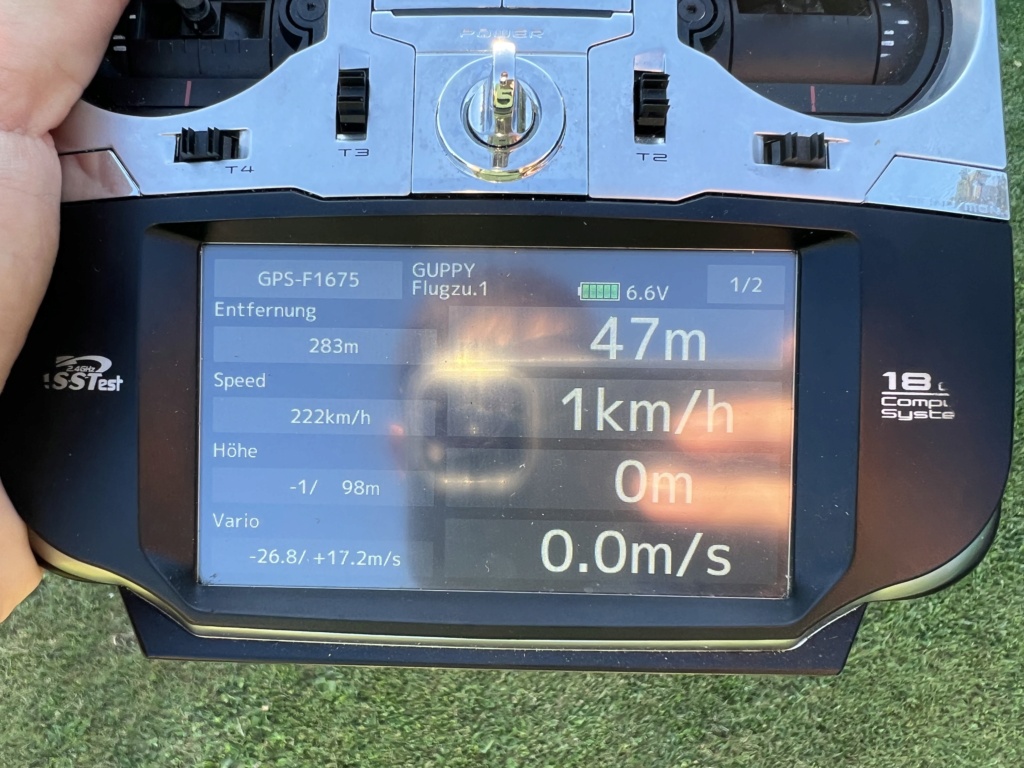 Congratulations the plane has indeed made a faster pass!
Do you have a photo of the prop with back cut?

Engine starts off strong but then something happens dropping rpm, some possible reasons:
Cooling down in flight creating a rich fuel state.
NV is moving (opening up a bit due to vibrations) can seal and hold with fuel line.


Setting NV quick to peak rpm with the plane level and launching before it heats to peak thermal state prompting
a richer NV setting to hold peak rpm in the hand. If launched before it peaks and sags will cool down in the air enough
to balance / set for best thermal state / rpm in flight.

So thats just the prop pitch speed right?
Here the comparison to the original prop. 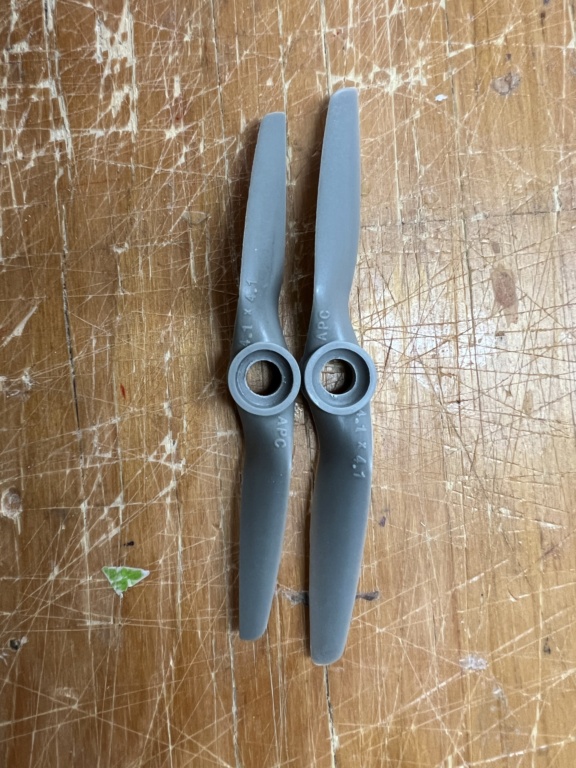 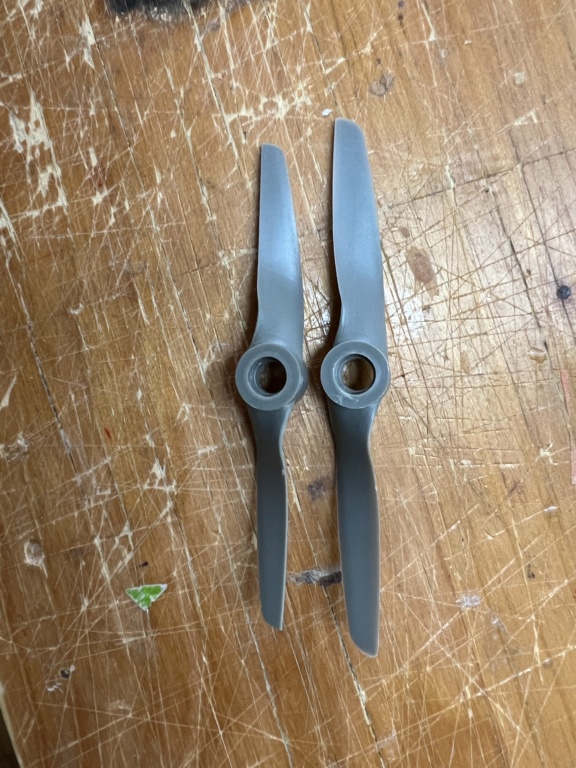 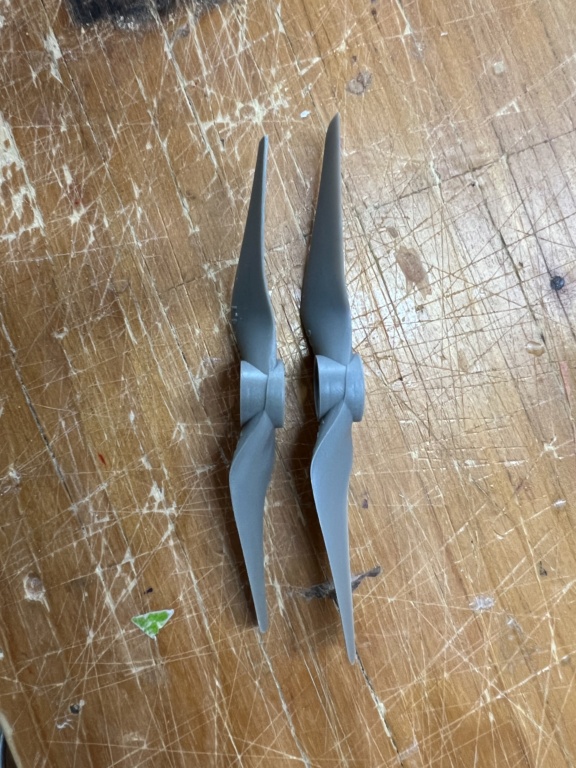 Interesting facts Brad , if he follows your advice this thing will fly the wings off LOL I see you don't have a fuel line seal over the NVA for a better seal , that's were i would start and what ever our friend suggest

I am just watching and learning some thing even the ones i don't all understand .