My guess is yellow based with stripes...I cannot wait seeing it, Mauricio.

I am having fun!!!
I started the engine today, she is a beauty !!!
Keep participating!!!!....
Thanks for being there! 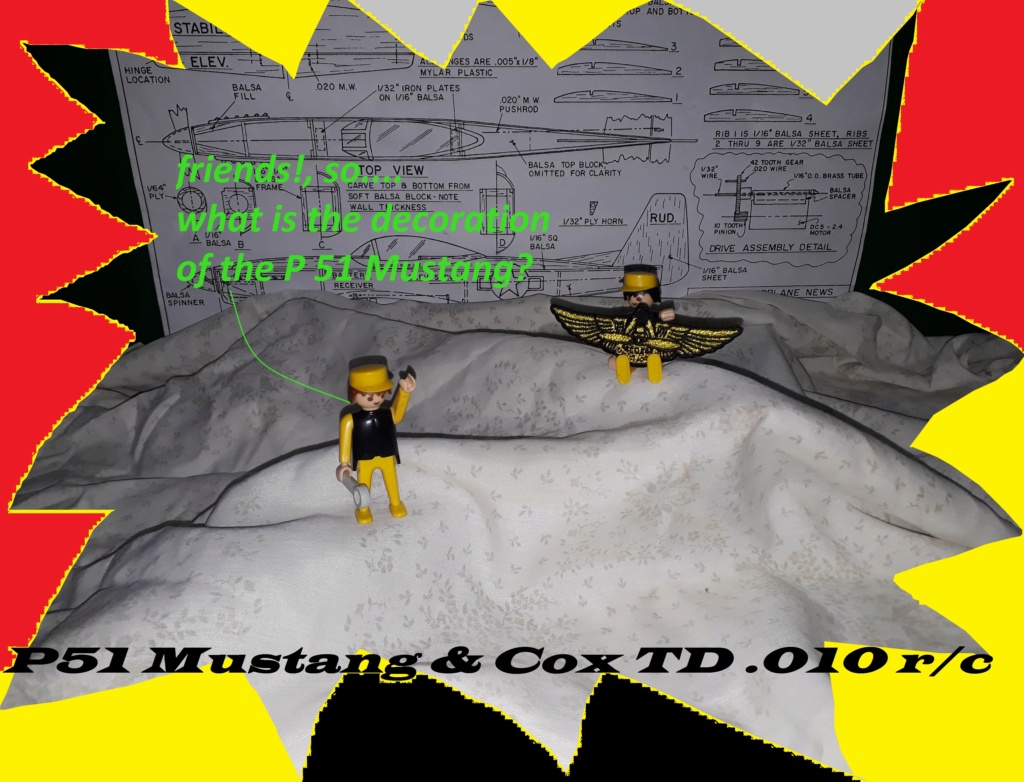 Well my dear friends, first of all, thank you for the friendship that is generated here every day.
Why wait any longer, I really like to share all this with you, so here we go with the Micro P51 Mustang and its Cox TD .010 r/c.
I hope you like it .... soon the flight!

Mauricio, the video is not accessible, it is under processing, at least now 5 minutes after your post..

balogh wrote:Mauricio, the video is not accessible, it is under processing, at least now 5 minutes after your post..

oh yes dear friend...a few minutes and it's out!...hope you like it!

Man that is Beautiful !~! you have taken the P51 to another level of build , I love the detail that has been incorporated in the the gear /wing /fuse and looks like plastic with the flawless finish ! I am sorry Brother but i can't understand the language you speak but i can tell you are very proud of this airplane you have put you heart and soul into this build .

Bravo Mauricio, beautiful! How much is the all up weight? When do you plan the maiden flight?

Micro P51 Mustang
Wingspan: 540mm – 21”
Length: 415mm – 16.5”
Weight: 164 grams
Channels: 3 (motor + ailerons + depth)
Wing: structure with ribs, raft.
Profile: flat
Engine: Cox TD .010 r/c
Incidents: Wing 1 degree – Stabilizer 0 degree – Motor 1.5 degree negative + 1 degree right.
I modified the incidence of the wing of the original plane, I explain:
The original plane has a positive incidence on the wing of 2 degrees, so modify the elevator position so that the wing is at 1 degree. The original 2 degrees of the plane are, in my opinion, excessive, when I fly this model, I will pass on the result of this modification. 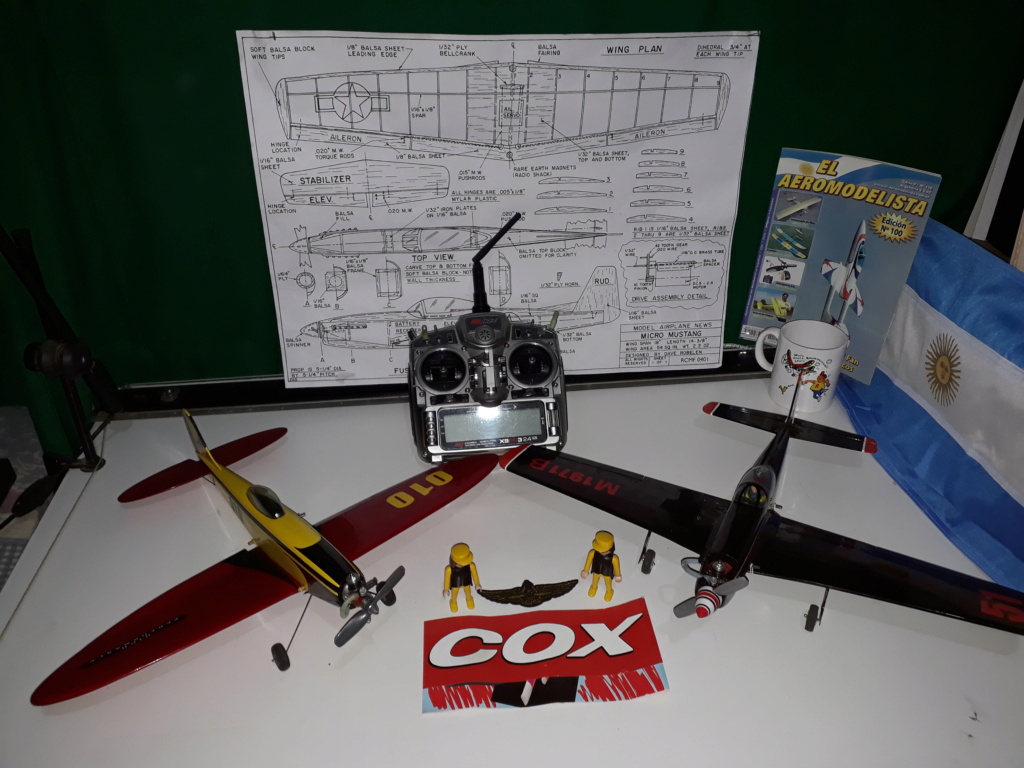 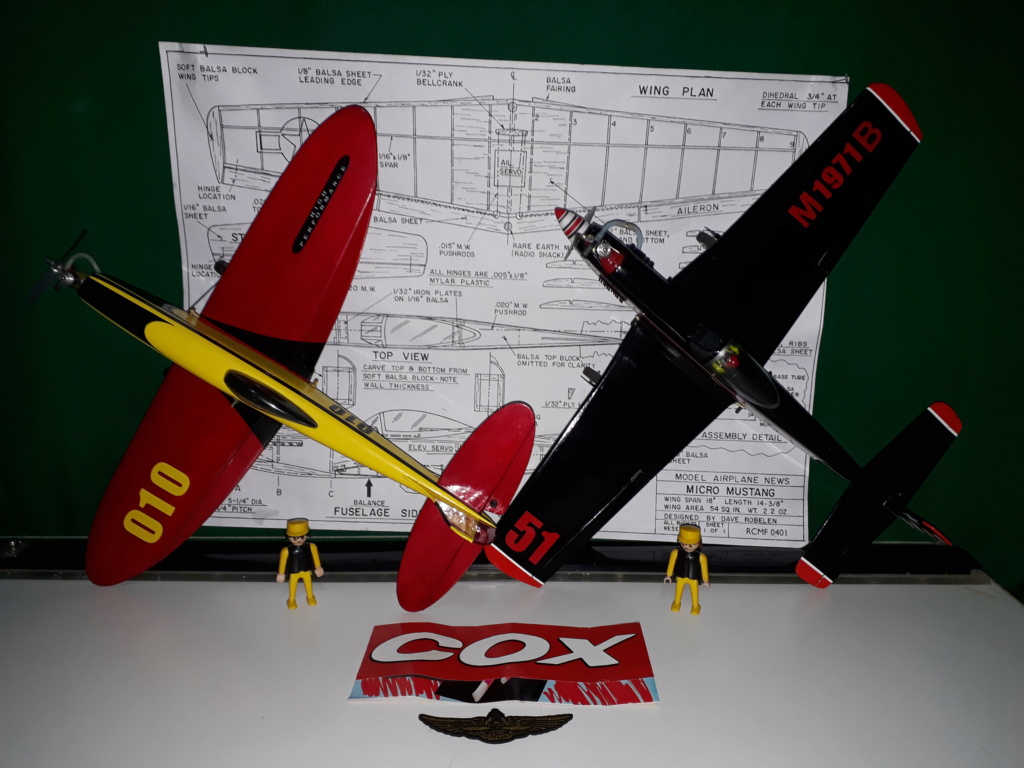 Thank you very much Eric and András for your comments.
I'm very glad you like it.
As soon as my time allows me, I will go to do the flight tests.... I will be sharing the experiences.

Thanks a lot, Mauricio,

My Sharkface with TD010 weighs round the same 165 grams, but is a bit chubbier and therefore has higher drag than your P-51 and the Piyurin, but still flies well....so I expect the P-51 will be a ball to fly!!!


Strange, I would have thought, that the heavier the nose with a TD010 (or lighter with an electric motor) the larger (or, smaller, respectively) angle of incidence for the wing is needed. So I would have either kept the 2 degree, or, would have slightly increased it in this glow engine conversion of the originally electric plane.

But the maiden flight will prove that your theory is right.

Congratulations, I wish I could work so nicely in finishing the small details on such a miniature plane, and wish you a successful maiden flight - and for us CEF folks a nice video from your maiden flight

Eric, you can use the translator itself that offers the video on YouTube itself

MauricioB wrote:Eric, you can use the translator itself that offers the video on YouTube itself

Well I didn't know that , I will Thanks Mauricio

Here is the first test of the Cox TD .010 engine already installed in the P51 Mustang.
Everything turns out very well!

She is ready to fly off the bench

I see it pulling really well (torquey) Slang for  a torquey engine is generally an engine that has a good torque band all the way from low to mid to high-ish rpm. A peaky engine ( ...

IU am looking forward to seeing the maiden flight.

Finally it was time for the flight. The P-51 is fully recommended for many who want to do it and enjoy it, since its flight is very safe, it has no vices or tendencies to instability.
A model that, doing it with the necessary details, will captivate most, since its lines are very clean and beautiful.
Remember that it is important to modify the angle of attack of the wing, in the plane it is at +2 degrees, but ideally and according to the flight you make, it flies really well with +1 degree. Also remember that instead of modifying the wing anchor, you must modify the stabilizer, so it is even simpler to achieve the objective structurally.
Measure the CG in an inverted position right where the single wing spar is and it should drop nose down about -20 degrees (you can adjust as you feel most comfortable).
The Cox .010 TD takes it wonderfully, that is, the engine and model go in harmony, with a speed fast enough to be attentive, being able to reduce speed (as seen in the video in the turns), than the model will remain in flight position without losing stability.
The landings are also very stable, of course if it is done on grass, it is possible to cover it and they should go in very fine, but if the runway is asphalt or dirt, then it is much simpler to put it on the ground with total security of clean and soft landings. .
Regarding the black color, they will have to get used to it, since the distance turns can lose the orientation of the direction of flight, pay attention to that point. It is better to fly it as close as possible if you do not have some experience, since the color or decoration suits it very well, but it can cause some difficulty in flight for pilots with little experience.
That's all for now. I think this beautiful project has been completed.
A hug and good flights!

Bravo Mauricio, well done, beautiful flight and landing with the engine still on idle..(I normally land dead stick I.e. after I have burnt the last drop of fuel).