» anti-crash for birds..
by crankbndr Yesterday at 8:03 pm

» B2 Stealth Bomber support-reverse engineering-good read
by 706jim Yesterday at 10:29 am

My friend and I built models and flew together since Junior High School. We met when I was flying my PDQ Flying Clown at school for a project. 6th and 7th grades let out to see me. I got it going in about 10 minutes and flew three times doing some of the Stunt Pattern. The teacher was happy, I got my grade and then Dave and I met when another guy I knew introduced us. The beginning of a long friendship.

Dave and I learned to fly full sized airplanes together, developed a British car fetish as well, as he had a TR-3 and I an MGB, and later we were hired onto the airlines too.

Fast forward to 1989 we flew at the first VSC. Dave had a Veco Warrior with Veco 19 kit on the bench and decided to go that way, I a Macchia P-63 King Cobra that was later kitted by Midwest with a Fox 35. He was a DC-10 first officer for American and I a flight engineer for TWA on the L-1011. I showed up late, Sunday am for the two day contest and asked the CD if i could fly both flights on Sunday. Mike KeVille said yes, no sweat.

Later, Dave and I flew our own airplanes as we progressed through the ranks at the airline, flying my Pitts specials, his Staggerwing, his Crosley Formula Ford race car, our collective bunch of sports cars, and years of R/C and C/L and F/F flying as the kids grew up.

A few weeks ago Bob Gieseke died. He was a few years younger than my dad, whom which took me to the Nats, introduced me to Bob, and as well all of those Stunt greats, and I thought this is the time to finish my gieseke Nobler and return to VSC. Dave agreed and sent his Rick Loomis framed up model to Lou Wolgast in Tucson for a cover and paint job.
Here are the results... 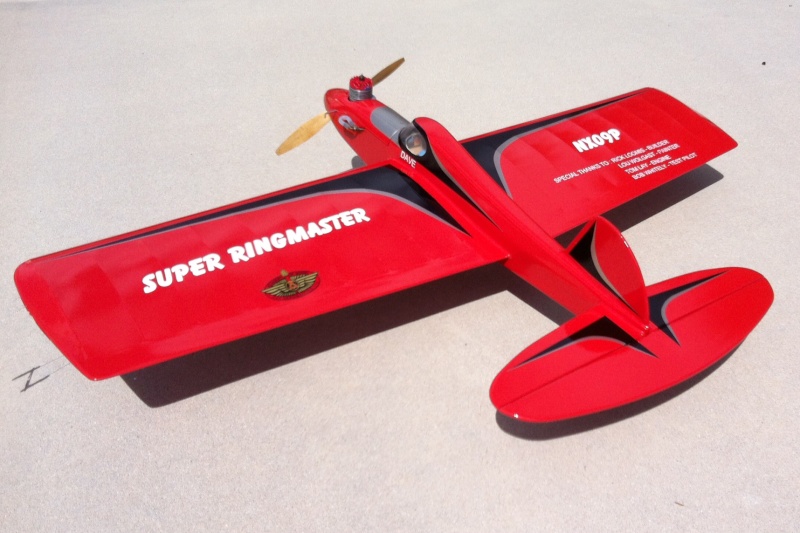 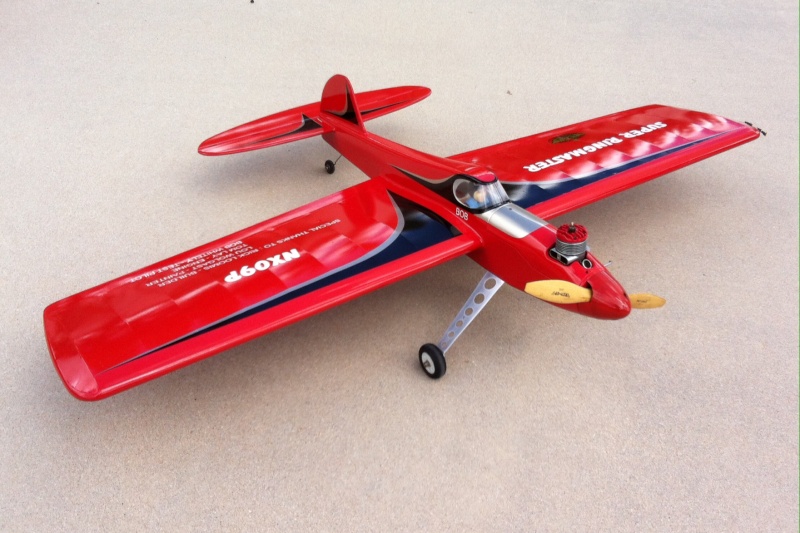 Here is a picture I found of me and Dave at a local schoolyard flying his first Super. He's starting the none-too-powerful McCoy 35, I'm holding and a gaggle of kids behind, one with a model himself.
Chris... 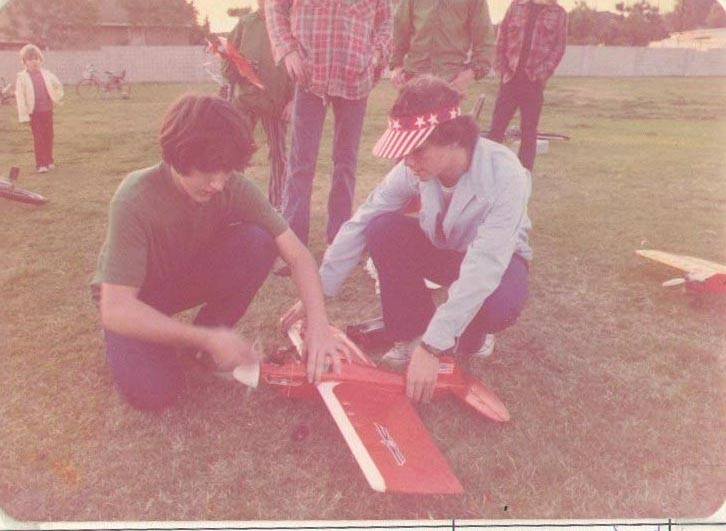 That's a very very nice looking aircraft. I can't read the writing on the wing, but assume it refers to your friend who has passed away?  Sounds like you and Dave have gone round the full circle in flight, hobbies and jobs, back to control line. That's fantastic!

Here are the rest of the pictures.
The Super is powered by a Tom Lay blueprinted NOS McCoy 40. Tom was a longtime engine guy for Stunt flyers delivering many National Champions their engines. His most famous was probably the power he could get from a Super Tigre V60. He died in 2014 during surgery.
The Super was framed up by Rick Loomis who was a master modeler building models from his chilhood in Free Flight, and Control Line in as a Stunt and Scale Champion when he was a Senior aged (teenaged), then for movies and did custom work. He died of cancer in 2013.
Lou Wolgast covered and painted the model and Bob Whitely has done the engine break-in and will perform the trim flying before the contest.
I'm building a Bob Gieseke Nobler as a tribute to Bob, who just died a few weeks ago. I know we'll see this more and more as the years go on. Seems our head tells us it happens to everyone and is the natural way of things, but our hearts don't accept it as easily.
Chris... 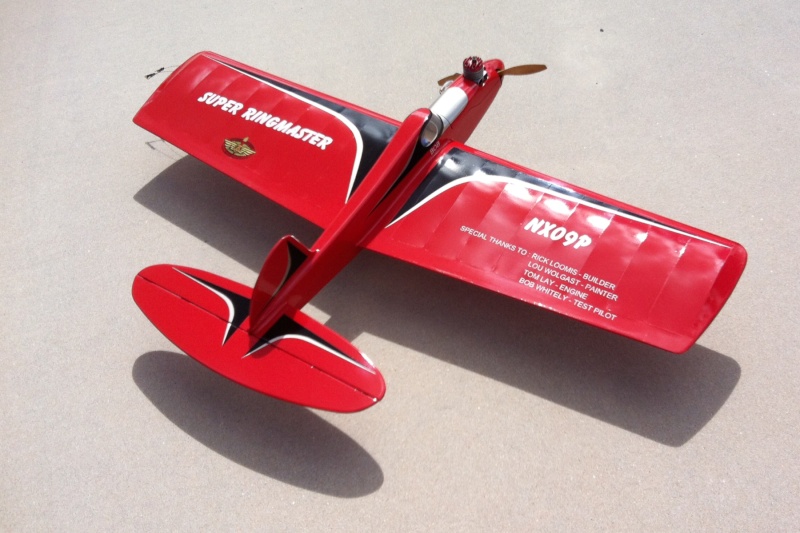 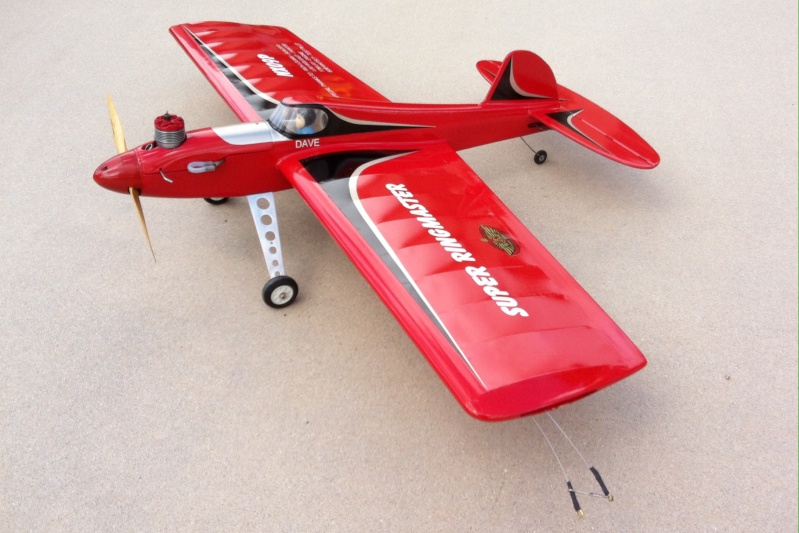 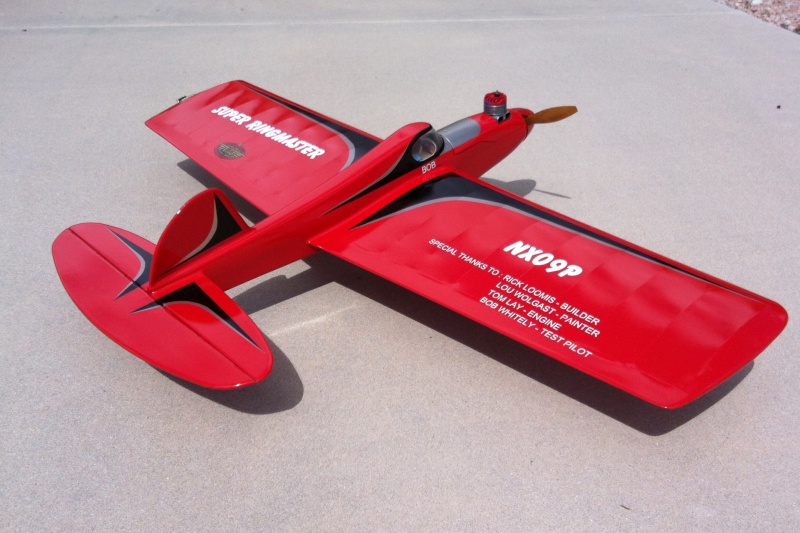 Excellent finish on the Super Ring. I'd be interested in hearing the Tom Lay reworked .40 run so be sure to get some video!

That is one fantastic looking model and a heart ripping story , I know the feeling of loosing long term friends . Thanks for Sharing . Eric . Yes videos please !!

Great reading Chris. Lot's of great history there. Dave's model is just wicked! (remember when we used to say that?

How far along are you with the Nobler?

Thanks guys. The Nobler is falling behind, the wing and tail are in, the blocks are all shaped but I'm hollowing them out, and the controls are ready to lock up solid for closing the fuselage. Then I'm going to have to hit it hard to get it covered, faired and painted by March 18th!
Chris...

Well, the Gieseke Nobler is not going to make it. A disappointment for me because I wanted a tribute to Bob Gieseke. I'll finish it after I get back from VSC. But the good news is that Bob Whitely is going to let me use his Formula S with it's hot zoot Double Star DS 54. A well known and seasoned model, I can't wait to get to Tucson to start practice.
I've been flying my Thunderbird with ST 46 as a practice model here. I think I have a messed up bearing, it has a very rythmic vibration, so out to the garage to swap it out and overhaul the engine.
Chris... 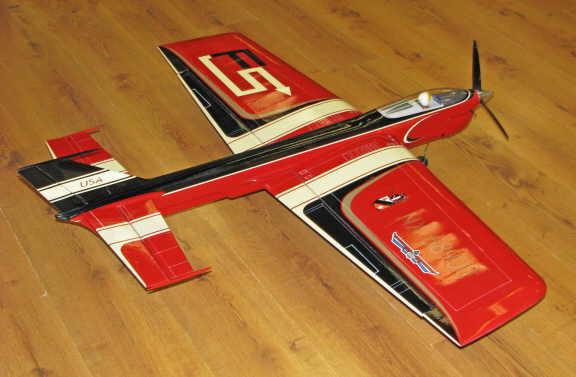 Great ! Looking forward to reading about it!

Looking forward to seeing the ringmaster in person at VSC. Unless work throws me a curveball my son and I will there on Wednesday.

Hi Jim,
Be sure and look us up and mention you are from the site. That helps me remember personalities from the web...
Chris...

Chris, the ST .46 has that weird band around the crank web. Last month we had one come off of the web and it went through the side of the case. That was very upsetting. Prior to exploding, it was suffering the similar symptoms your describing. While many have claims that this is a needed part on the crank, I've witnessed many of them running without it. Just something to look at. Ken

Thanks Ken,
More stuff to check out.
Chris...

The engine bolts were loose in the Thunderbird. I flew it another 3 days, no problems runs like a champ.
The Ringmester has flown. Lou Wolgast flew it the first two times and Dave flew it about 5 flights with Keith Trostle helping out in the grass circles. Corners better than we thought, lloks good in the air too.
I got a flight in on the Formula S but the wind came up a little too much and I called it a day.
Tomorrow we'll practice all day to prepare for the officials starting Thursday, three rounds, one per day, finals Saturday, low score thrown out.
Chris...

It's all over,
Kaz Minato won Classic with a Gypsy, his friend Hiki won Super 70's with a hallmark by Gene Schaffer, Joe Gilbert won Old Time with a Ringmaster S-1, and I did fine for what I had and ended up with an 1101 for two best flights. The scores were astronomical, with with three over 600 and if you weren't scoring over 480 you weren't doing well!
Dave was in there with three officials over three days on the Super Ringmaster, we had fun which was the goal.
I'm back home, will continue building the Gieseke Nobler and try to get the Bob Palmer Memorial off for the next contest.
I'll try to get some pics, but there are some on Stunthangar.
Chris...