I picked this up on ebay for $11 and change thinking it different enough to warrant a look. It resembles the McCoy model 5 but it only shows .049 where the 5 should be. I googled it but nothing like it appears.

Oddly the rails are not drilled but instead a mounting bracket is attached to the rear of the fuel tank. The glow plug doesn't, looks like I will need a replacement. Lot's of pliers marks from someone trying to unscrew the head to no luck. I will probably just disassemble clean and paint the head red as it's probably not worth anodizing. Any ideas where I can find a replacement glow plug?

I had a McCoy "5" in both glow and diesel. I don't remember it having a "5", I think mine had .049 on it also.
The mounting bracket was used by removing the tank and bolting it to the engine at the beam mounts. My engines had the beam mounting lugs drilled. The radial mount rails were longer with two holes. Yours may have been modified. I don't remember a hole to use it behind the tank.
The plug was proprietary to only that engine. When it dies you might want to have it modified to accept a normal plug.
When you clean it you may find a poppet valve in the venturi. Some had them, some not.
Good luck with it. 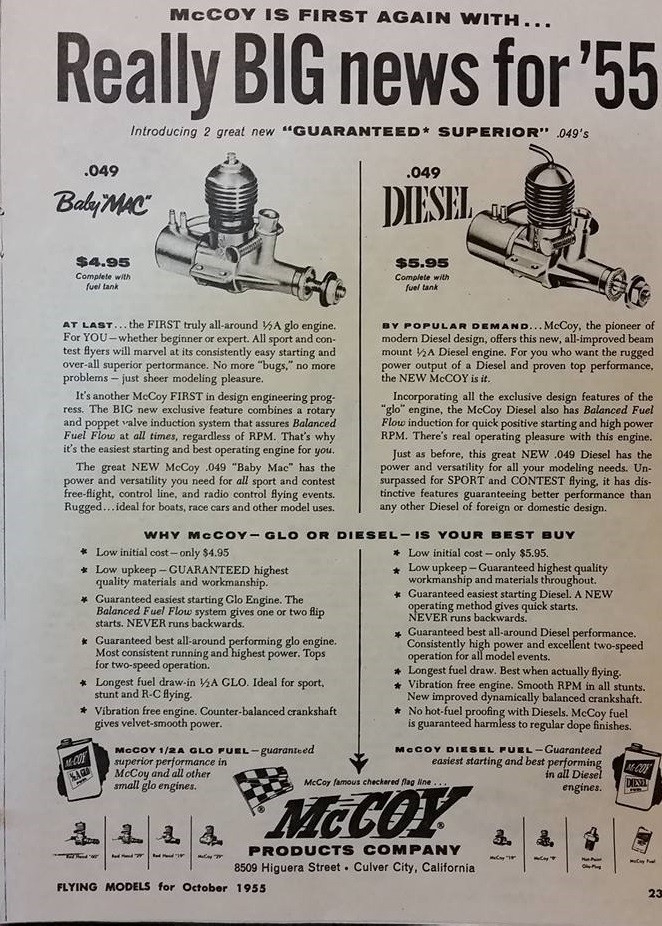 I've never seen that before as well, i gotta wonder if it was made for a McCoy Plastic model? Bill? 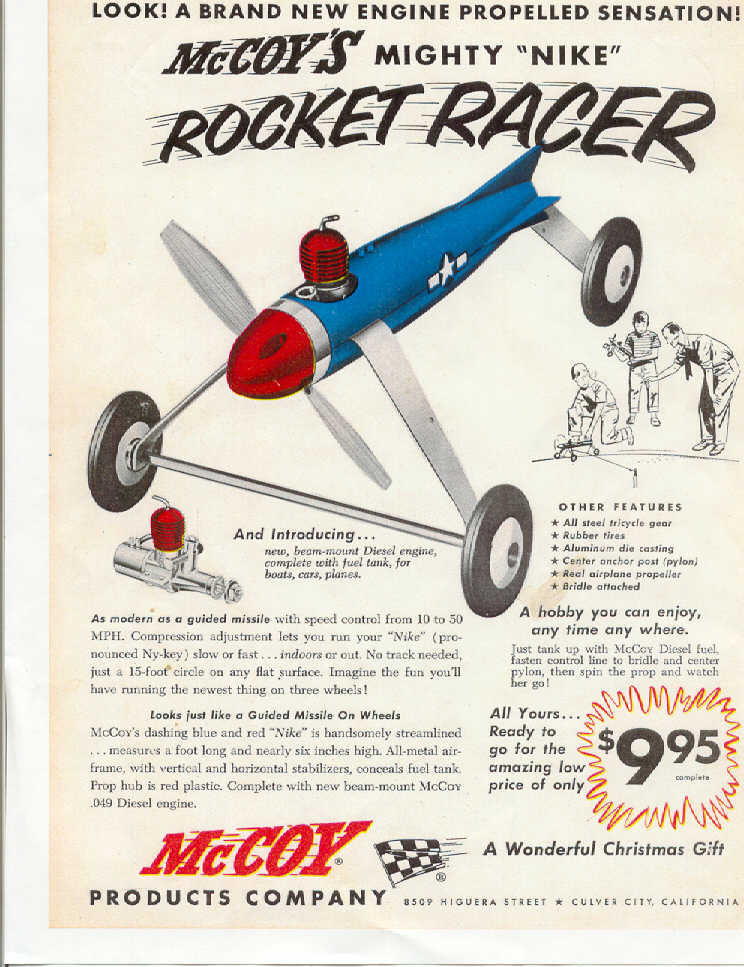 Thanks for the responses.

The radial mount looks good enough to be factory, but I think it's home made..

The needle valve is broken off too, so that presents a challenge. I might be able to find a suitable replacement at MECOA.

There are no flats on the glow plug to remove it that I can see. I will heat it up and hopefully disassemble it.

This is what your glow plug probably looks like. 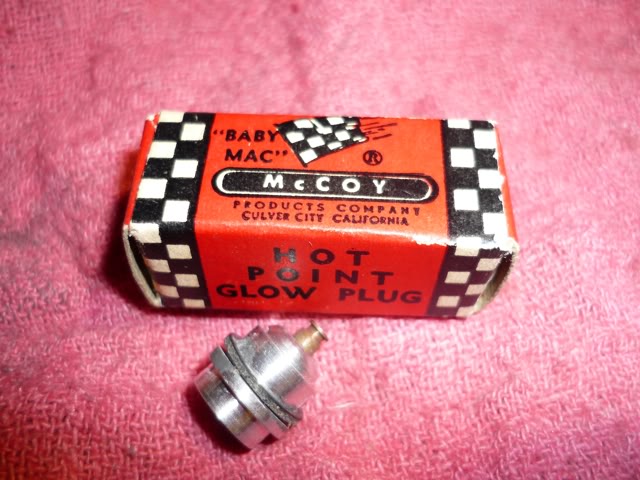 Here's the link to the RCU forum I found the picture.
http://www.rcuniverse.com/forum/glow-engines-114/10545790-vintage-glow-plugs-early-days.html

You have "quite a bit" of broken needle sticking out. I suspect that with a needle file and/or a #11 blade you can make a screwdriver groove deep enough to back the needle out.

@Oldenginerod wrote:This is what your glow plug probably looks like.

Here's the link to the RCU forum I found the picture.
http://www.rcuniverse.com/forum/glow-engines-114/10545790-vintage-glow-plugs-early-days.html

This the plug you need and they show up on Ebay fairly often. The whole top of the cylinder screws off to replace it. There are actually wrench flats at the top of the head. Use a snug fitting wrench and some heat.

It isn't a McCoy 5. The McCoy 5 had the beam mounts and also a new 3 bolt radial mounting flange cast on the back. Most McCoy 049s I've seen had a single filler tube at the extreme rear of the tank and a small overflow hole. You're looks like it had two filler tubes. I'm with Mark; I think it must have been used on an RTF and maybe used the steel mount. That would explain the undrilled mounts.

@GWILLIEFOX wrote:It isn't a McCoy 5.  The McCoy 5 had the beam mounts and also a new 3 bolt radial mounting flange cast on the back.  Most McCoy 049s I've seen had a single filler tube at the extreme rear of the tank and a small overflow hole.  You're looks like it had two filler tubes.  I'm with Mark; I think it must have been used on an RTF and maybe used the steel mount.  That would explain the undrilled mounts.

In that case mine were not "5" versions because they were beam mount only, although one, the glow I think, came with a sheet metal radial mount.
The tank on my diesel has one fill tube and a hole for the fuel line, which is one piece from pickup to venturi. I bought it off the internet so it may not be original. The ones I bought new have long-since disappeared. 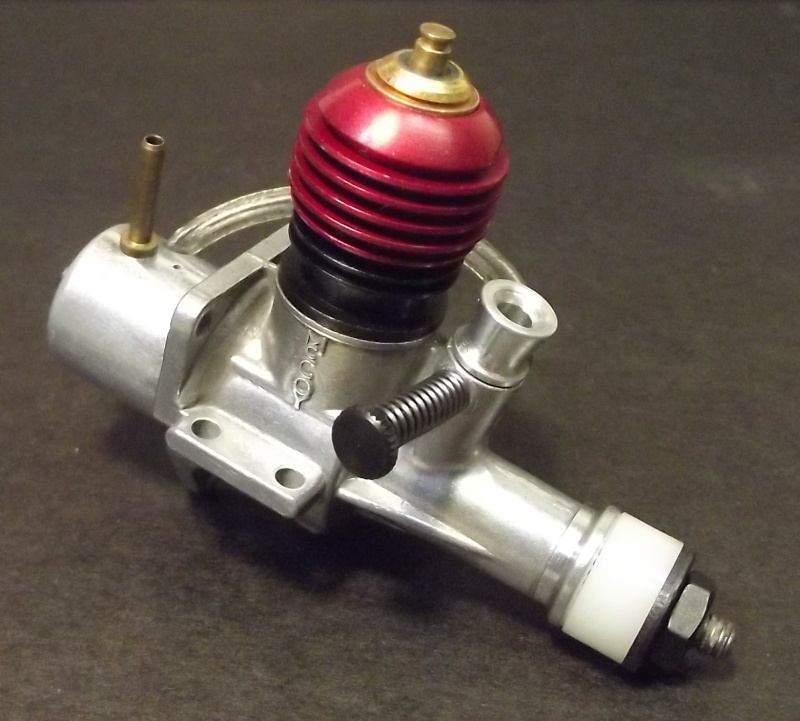 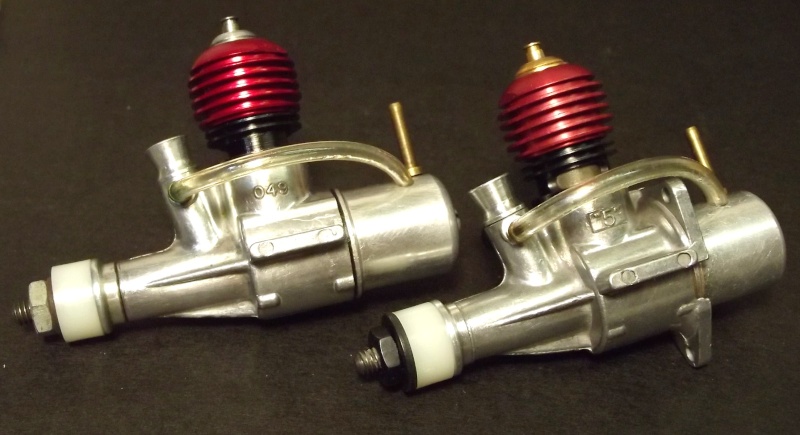 Thanks for the pictures and help guys.  The back plate unscrewed easy,  only one that did.  I used some files to clean and straighten the fins, then filed the damaged flats on the head to facilitate the use of an adjustable wrench as no other wrench would work.  (The flats were completely rounded off.)

then tried to unscrew the head to no joy.  Heated it up, applied the adjustable and with much effort it broke at the cylinder/crankcase junction.  Darn, I wanted to remove the head.

So risking damage to the cylinder I used a Cox .049 wrench through the exhaust ports and the adjustable on the head.  Again to no happiness.  Heated it again, 400 degrees and this time with supreme effort the head separated from the cylinder, saving the gasket in the process.

Moving on to the broken off needle valve I was able to cut a slot on the shaft with a fine cutting wheel on a dremel.  Backed it out easily.

I then tried to tap the glow plug out of the head.  Wouldn't budge, tried pressing it out.  Nothing there either. Heated it up again, still won't move.

So it's sitting in penetrating oil hoping that it will loosen it.  Looking at the pictures, there is just an 1/8th" rim holding it in.

If I can get it out I'm going to clean up the head some more with 400 grit and finer files to remove the PO's pliers marks then just paint it red.  It will need a needle and a glow plug to be functional.

Just for display, once the head is physically restored, clean it good with alcohol. Go down to your local craft store, Michaels, Hobby Lobby, Jo-Ann, etc. They have huge variety of felt tip pens in any color you can imagine. The right one will color the head very nicely.

Well, finally I got everything apart. The penetrating oil soak loosened the glow plug to the extent that I could just tap it out. Lot's of gunk around it, but it glows. I may not have had a good connection when I first tried it, but it's ok now. Except it appears that the gasket was put on the wrong side, next to the cylinder instead of the head as shown in the boxed example above.

I filed and polished many of the pliers gouges out of the head, but the deep ones remain. I will have to live with those. Thanks for the red magic marker tip, I will try a close red one.

More good news is that a Holland Hornet needle valve fits fine, same tpi and taper. Test fitted everything back together.

When I removed the cylinder using the Cox tool I did create a burr in one of the exhaust ports. I tried someone's reverse piston technique and it worked fine. Even without the head gasket it has good compression. I may get this thing to run yet. Just have to cut me a couple of vent/fuel tubes and insert them in the fuel tank.

Nice work! Welcome to the ranks of the Makers of Silk Purses from Sows' Ears.

@GWILLIEFOX wrote:Nice work!  Welcome to the ranks of the Makers of Silk Purses from Sows' Ears.

Thanks gwillie,  this purse may turn out to be made of rayon though.

I did manage to pick up a real McCoy "5" on ebay yesterday, another $11.00 engine.  Not much competition for these McCoy's.  I have bought them for as little as $2.99.  They are just as much fun to rebuild though as any other engine.

It needs some help, a needle valve assembly and a prop (thrust) washer but overall it looks to be in better condition than the .049.

Bob.
This looks like what you might need.
Ebay prop driver.
Should be right for your new acquisition.  Funny that you say they're common & low priced.  I've been searching for a while & can't find one anywhere near my budget

Bob,the .049 looks a lot better now.You did a great job on the head considering what it started out like.
I am curious to hear how she runs!
I think your work on the old Mccoy's is great.Making the tired and seemingly hopeless engines breath new life is my passion!

Well, we went from this:

I decided not to use magic marker red to do the head as I really want to run this engine although I think it would have given a more anodized look. Maybe later I will redo it.

The fuel and vent tubes presented a problem. I managed to flange one end of each and force them from inside the fuel tank up to a secure position but I knew they wouldn't stay so I epoxied them from inside the tank and put a drop of CA on the outside seam. May hold for a couple of flights, maybe not.

I didn't sandblast anything on this engine deciding instead just to clean it well with Remoil and a tooth brush.

I still want to gun blue the mount and touch up a few details. I also need gaskets for the head and glow plug.

nice work! The cylinder head looks great. A red Sharpie does work great and you can spray it with a satin or semi gloss clear Rustoleum to keep help keep the ink on.

WOW Looks great Bob you do nice work ! Did you try a cox head gasket ?