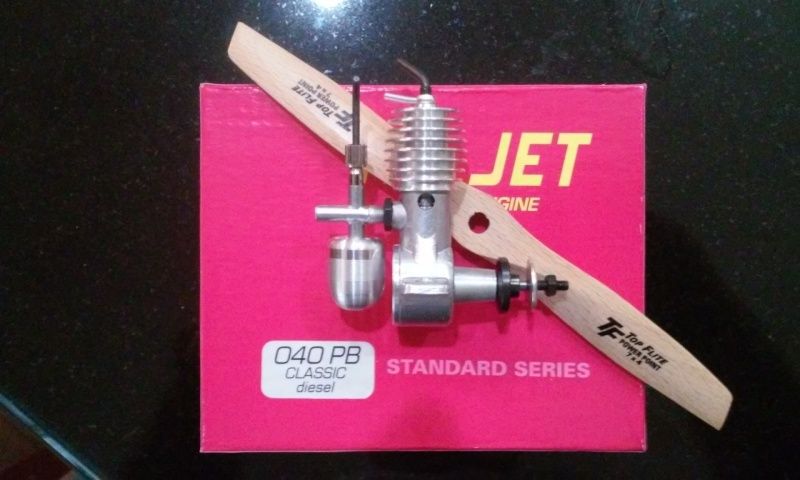 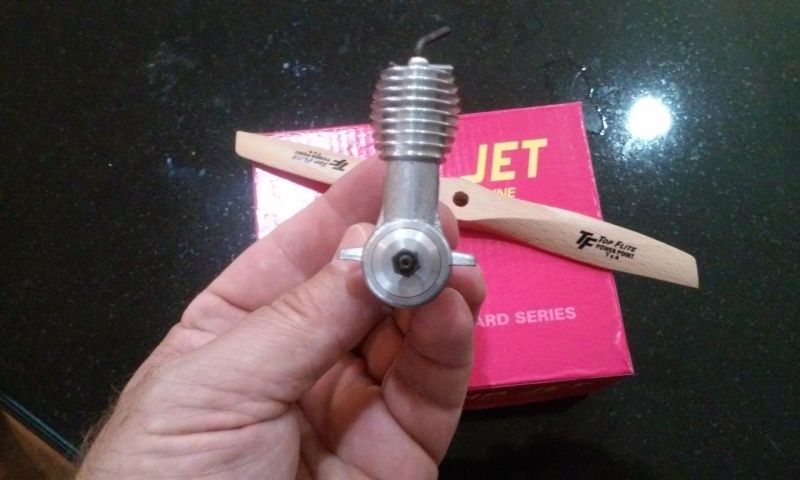 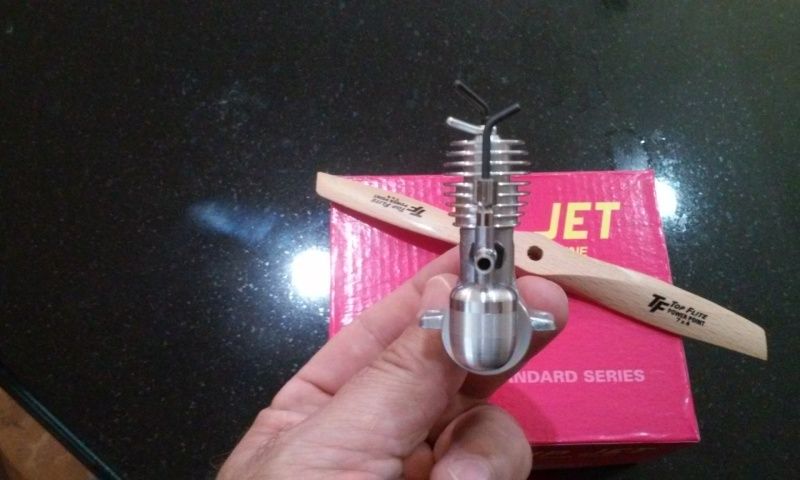 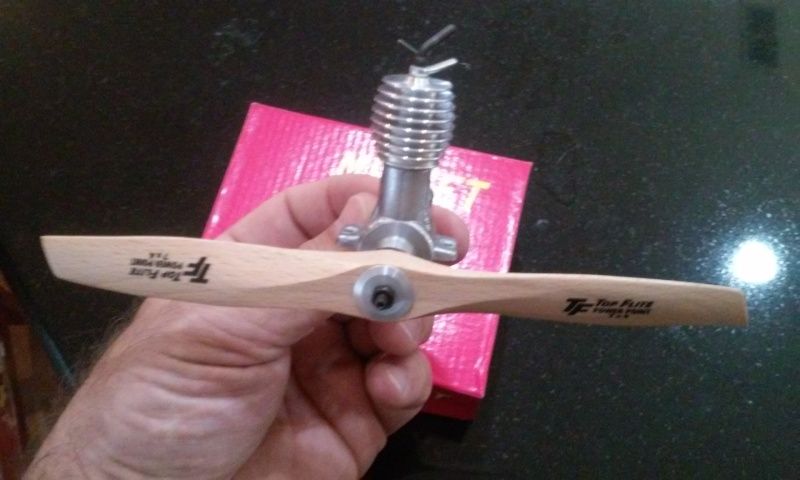 Nice little engine, you must be one of MP Jet's top fans in the USA. I don't come across many people that know of them. But Bob Zambelli does, I think he has several glow and diesels. If you ever have trouble finding plugs for the glow engines, let me know, and he can make some heads or rework the existing heads to accept standard plugs.

I have one of these and they are very easy starters.

I ran one in for a friend and had a bit of trouble getting it to run smoothly - it kept hunting. I found it wasn't happy on the traditional 33% castor, 33% paraffin and 33% ether. I reduced the castor to 20% and upped the paraffin and ether to 40% and it ran fine.

After about 20 minutes run in - it was quite happy with the traditional mix and has had quite a few hours on it now in a Veron Cardinal.

is-it possible ti substitute paraffin with kerosene ? I have one MP Jet 040 but it never run. So before I prefer to mix the right fuel for the first run.

is-it possible ti substitute paraffin with kerosene ? I have one MP Jet 040 but it never run. So before I prefer to mix the right fuel for the first run.

Paraffin is the UK word for kerosene. They are one and the same. English is a strange language,

And my native language is french, so english is very strange for me...

Thanks for your help,

I can't get it to start!!!!  I am using a Top Flite power point wood 7x4 prop and Davis Diesel 1/2 a fuel.  I can get it to start to sputter and go for five or so seconds but it never wants to truly get up and go.  Could I need a different fuel for this small engine or perhaps a heavier prop?  A 7x4 is suggested in the manual. This little thing whipped my old butt all over the place this afternoon.  I have seen enough videos of people starting and running these to know it has to be me.  I have found that it has a very broad compression range for popping and sputtering and none of the videos I have seen show it to be too sensitive with regard to compression.  My fuel is fresh.  Perhaps a bit more ether to get it out of its own way on start up.

I just saw in Ian's post a different blend for fuel. I have to find out the blend of what I am using and then adjust it. The manual recommends 40% ether, 40% castor and 20% kerosene for break in. Is it common to use so much ether in such small diesels? After break in the manual recommends 40% ether, 35% castor and 25% kerosene. I have removed the fuel tank and have it hooked up to an external tank. Could that be a problem?

@fit90 wrote:I just saw in Ian's post a different blend for fuel.  I have to find out the blend of what I am using and then adjust it.  The manual recommends 40% ether, 40% castor and 20% kerosene for break in.  Is it common to use so much ether in such small diesels?  After break in the manual recommends 40% ether, 35% castor and 25% kerosene.  I have removed the fuel tank and have it hooked up to an external tank.  Could that be a problem?

Higher ether content makes it fire at a lower compression. One engine (Bambi .009?) recommended ether and castor oil for fuel, no mention of kerosene, assuming I remember correctly.

I don't have a Classic but I used ready mix for my Letmo. I have used Davis 1/2A fuel and it works fine. To be on the safe side, I would go with what the manufacturer recommends. After it is fully broken-in you can try different mixes. Less than 25% castor is usually not recommended for a plain bearing diesel. You might want to add a bit of cetane booster to the mix also.
I would disconnect the tank until you can start it and run off exhaust primes. Move the piston up until it covers the exhaust and put a drop of fuel in the exhaust...then flip. If you have no idea where you are on the contra setting, move the piston to TDC, move the contra down until it touches, then back off compression one full turn. That should get you close.
Once you can run primes, hook up the tank. The needle does not care where the fuel comes from. Close the needle and open it until it just starts to suck fuel. Open one more turn. Adjust in small increments until it runs.
The 7x4 prop should provide enough flywheel action without overloading the engine.
Good luck,
George

Get it reliably firing on a port prime (with the piston closing the port) first, and only after that do you need any fuel in the tank. Once you have the correct compression setting to get it to run out each prime, then put some fuel in the tank and start from a too lean needle setting, open the needle a little after each prime run and you have it running in no time.

An plastic or nylon prop will give a little more swing-mass and can give easier starts. An 8x4 will also be fine, and perhaps better, I think the 7x4 is on the small side for these old-school engines.

You'll also need 1-2% of IPN in the fuel as this reduces the sensitivity to the exact compression setting.

@Surfer_kris wrote:A plastic or nylon prop will give a little more swing-mass and can give easier starts. An 8x4 will also be fine, and perhaps better, I think the 7x4 is on the small side for these old-school engines.

Come to think of it, I think I used an old white nylon Cox 8x4 prop on my Letmo. I was surprised at how well it turned. I had intended to switch to a smaller prop once I got it to fire but since it ran so well, I used that prop for the entire break-in. Sorry for not remembering but it has been ~20 years since I ran that Letmo. I also remember that it started easily.

A separate tank in the wrong position stands a good chance of flooding it.

I might have been flooding it. I got it to run off the prime. It actually ran for several seconds on just the prime. There was not enough run time to adjust anything. I will put the engine mounted tank back on and give that a try. Thanks for all the help everyone. I really apprediate it.

I let this little thing whip my butt some more today. I have it running off a prime nicely but can't get it to do anything more than stumble along a few seconds longer with any tank hooked up. I think it is time to take the NVA and induction tube apart and look to see if there is anything other than me wrong with this.

I did it! I took it apart and found that everything was in great shape. I also noticed that the contra piston and engine piston had a huge "pinch", much worse than a new Norvel revlite engine. So, after re-assembly I heated it up and really cranked down on the contra piston. I was able to tighten it about two and a half more turns. Then I backed it off a turn as suggested by George. That put it right in the ball park and I had it running in just a minute or so. And man did it run. It turned a Cox 8x4 prop at a steady 10,100 RPM. I think this might be one of those engines that needs a little TLC and running in to do well. If it keeps running like this it will be completely worth it. Thank you all for the help and suggestions. I have really enjoyed playing with the diesels and your help and motivation not only pushed me this way but has made it all the more enjoyable.

Could thid engine have been so difficult to start because it was new? This was my first new diesel. I know many glow engines are difficult to get going their first time. Perhaps, hopefully I will have the pleasure of starting more new diesel engines.

Not necessarily because it was new but because it isn't a "new" engine. It was made some years ago and has been inactive.

Setting up a diesel engine is more difficult than a glow but, after a while, your ear will be tuned to the right sounds for starting.

Every diesel has its own bark!

fit90 I am glad to hear you got the engine straightened out and running for a break in . I haven't got back to the Mills 75s , been doing spring time stuff , but I intend to get to it soon all this work and no play isn't good for me !! if I cant get this guy to send me some of that cetane booster I am going to mix up some fuel and give it another try after an engine inspection . Are you intending to fly CL with that engine ? getback

I was watching your post and hoping for you to have some better luck with your MIlls. I hope you can get it all sorted out soon. This engine will be put on an R/C plane some day. I had a plane picked out but I actually think this engine might be a little more powerful than I would like for the plane. I am going to try a 7" prop this weekend to see about limiting the thrust and gaining some speed.

I am definitely beginning to recognize that every diesel has its own distinct personality, even more so than glow engines. I think that is part of what has attracted me to them. I really like the term "bark." Thank you again for all the help.

It was really designed to be used with the attached tank for vintage models - FF or RC, it isn't a stunt engine.

I have seen one on a control line Keil Kraft Champ though.