the performance of an engine, any engine if you clean it, especially if you remove the build up of "varnish" on the cylinder wall?

This question has bugged me ever since I read a post here many months ago.  There was some discussion pro and con regarding it.  So, having recently acquired this rather ratty early # 5002 Enya .29 I decided to do a test keeping the variables (fuel, glow plug, ambient temperature, propeller) constant. 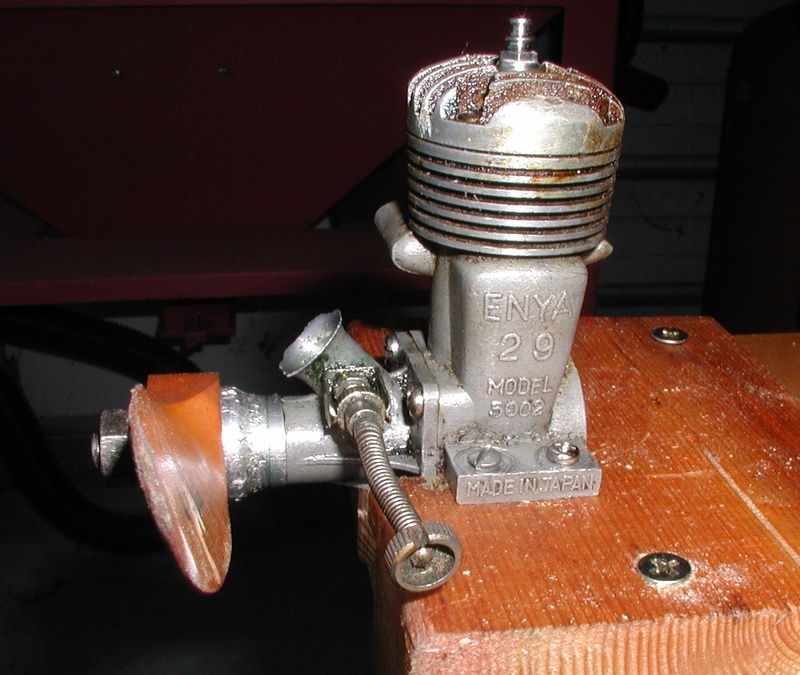 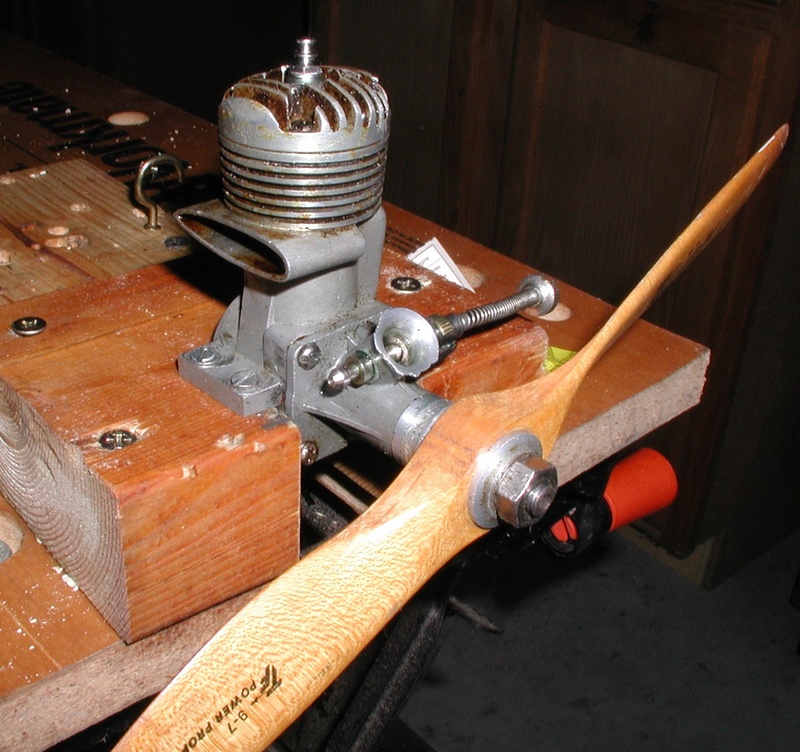 Even though the engine has damaged machine screw heads, is missing fins, lot's of castor build-up and later discovered had no case gasket, it had gobs of compression.  I replaced the missing glow plug with a new Enya #3 and attempted to start it.  Lot's of snap, crackle, and pop but no start hand flipped.  I finally hit it with an electric starter and it took off on it's first rotation.  Never can understand that.

It was running rich so I leaned it out to a nice steady pace at a high RPM.  Running great but I did not tach it but should have.

Did my standard cleaning, crock pot boil, fine steel wool, brushes, clean again with Simple Green, water rinse, "sand" (aluminum oxide) blast, and a final rinse in alcohol then compressed air blow-out and a Remoil spray before reassembling.  As mentioned, when I disassembled it there was no case gasket so I put it back together without one. 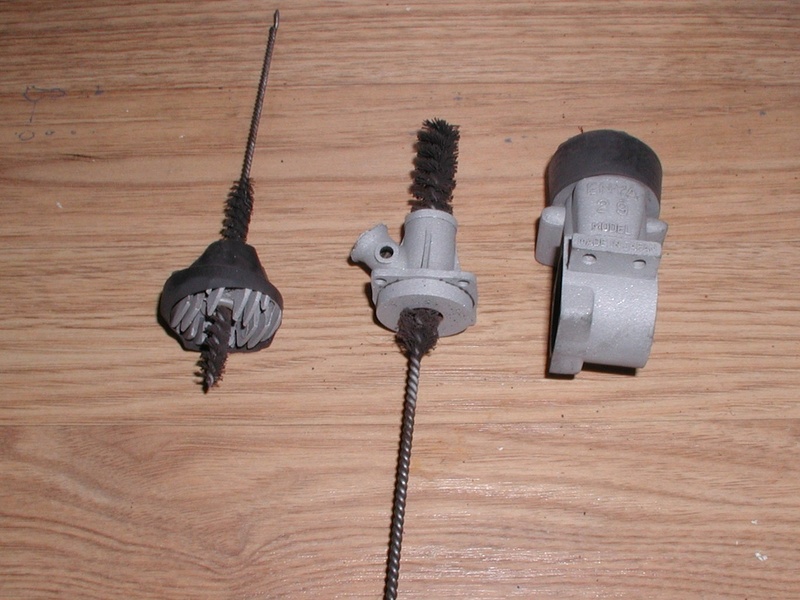 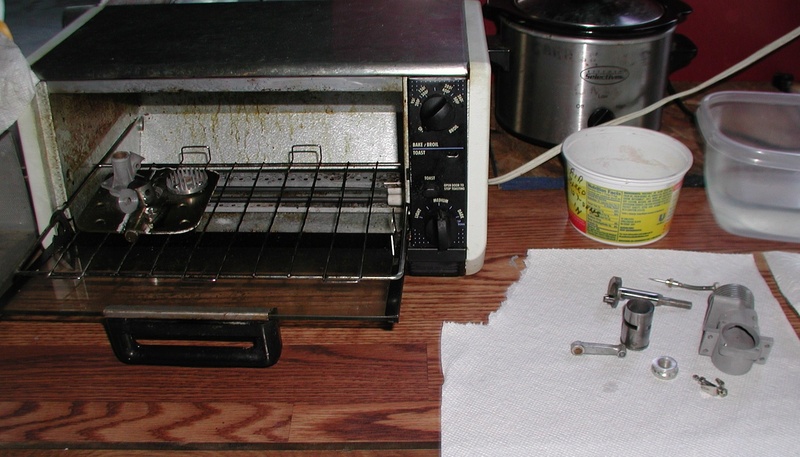 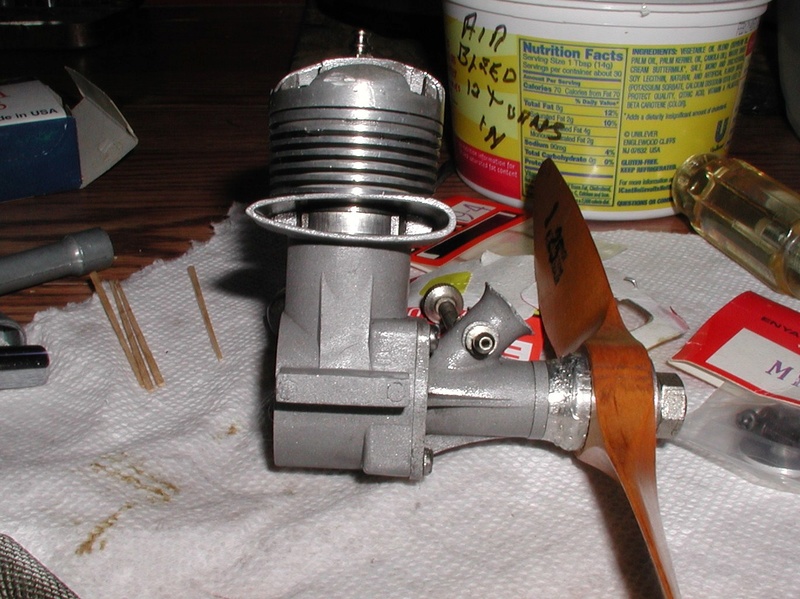 Still, the compression was good and it started on the second flip, running rich.  I leaned it out to a steady RPM but no where near the speed that it had before I cleaned it. 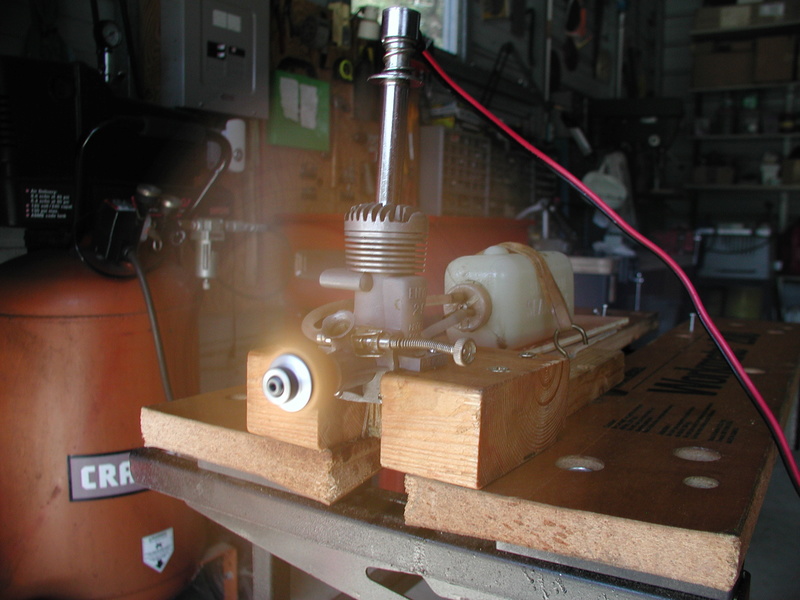 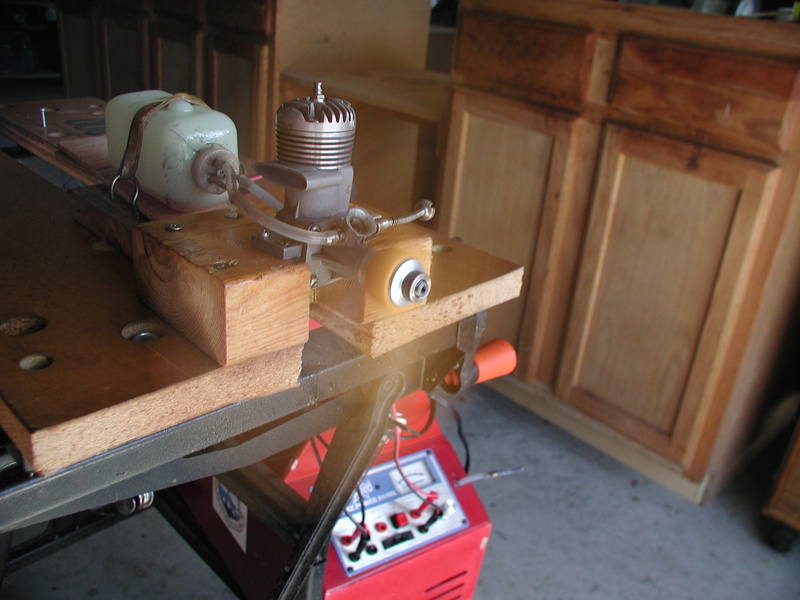 So from this small sample one could conclude that removing the varnish on the cylinder wall could contribute to the lessening of engine performance, but there is the variable of the missing case gasket as I'm sure that I did not get the seal of the original with sticky castor filling the voids on both the case gasket and the heads seal.  I have plenty of the later .29 gaskets but will have to order some from Bobby Brooks and try again.  Maybe a few runs will restore the higher engine speed.

The .29 Enya has always been a favorite of mine especially the vintage "airfoil" design, it was my first large displacement engine and one sits on the nose of my Sterling Fledgling.  Still, it's not quite a .35 but is a whole lot more engine than a standard .19. 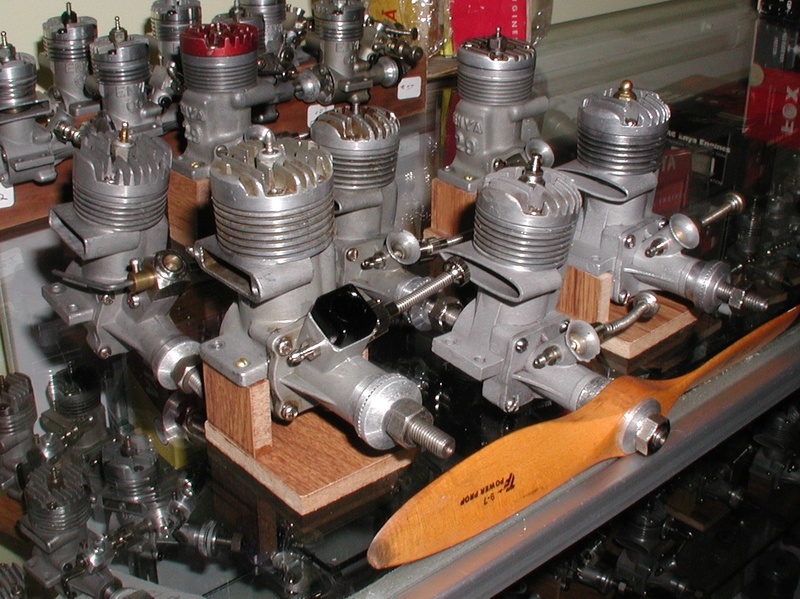 It is always risky doing a complete strip down and clean -reassembly has to be precise - particularly with the iron/steel pistons and liners.

It can be recovered but it will need quite a few short runs. Use a minimum of 25% castor - lean out the engine and run at its best speed for a minute. Pinch the fuel line or screw in the needle (no choking or stopping with a rag) - let the engine cool down naturally - really go cold - then repeat. Keep checking the top RPM and see if it improves.

I don't understand why people have the urge to boil and clean everything, even inside the engine, that's just begging for trouble. The castor oil has a very important purpose inside the engine, while a little patina on the outside of the engine just shows that it has had a life!

I've seen people trying to run-in the old-school Enya's on pure synthetic oils, they will never seal that way. Use the contemporary fuel and these engines are very long-lived.

@Surfer_kris wrote:I don't understand why people have the urge to boil and clean everything, even inside the engine, that's just begging for trouble. The castor oil has a very important purpose inside the engine, while a little patina on the outside of the engine just shows that it has had a life!

I've seen people trying to run-in the old-school Enya's on pure synthetic oils, they will never seal that way. Use the contemporary fuel and these engines are very long-lived.

Many schools of thought here - a used engine of unknown provenance can be a can of worms. I find it debatable whether to strip one down or not. If the engine hasn't been stored very well and the case is showing corrosion or it looks like grit has been ingested - then I resort to a strip down.

Sometimes, I make up a fuel with synthetic oil and run with that to de gum an engine. On a thirty+ year old engine the gum can be like epoxy.

If the engine is special but clapped out following cleaning - then I will make a new piston and hone the liner (or rebore it). I have brought back to life many a vintage basket case.

If all that is keeping an engine performing is varnish - the it probably hasn't much life left - you never know how many hours a used engine has been run or whether it was properly run in. At least with the "classic" iron/steel - you have a chance of recovery.

These threads always make me wonder of the best method to inspect/test-run an engine; as received.. having been run previously... all else being in order.. regardless of age. If it's not seized.. and "seems" to have good compression; what should be checked as a safeguard? There may be no replacement-parts available for the engine.. at all. Gaskets might be able to be made.. but other parts could be unobtainium.. unless you know a good machinist.

We all want our engines to run indefinitely.. but what simple-measures should be taken to help ensure their longevity? Running the proper lubrication in the fuel and the appropriate propeller are just two things that can be done before anything else.. correct?  Maybe experiment with different glow-plugs before "any" disassembly. Research can help with discovery of a particular engine's shortcomings.. where more aggressive action might be taken. There's been several helpful threads here on engine re-work.

Beware of the engine that you may acquire with a noticeably-worn spinner. It's a sign of an electric-starter being used. Electric-starters are fine if used correctly.. but.. I've witnessed many aero-modelers impatiently starting their engines via elec.-starters.. that make me cringe! Some will force the starter against the spinner-cone for several seconds.. until the engine either starts.. or they fiddle with something else... and repeat.

I sometimes use a homemade elec.-starter with my Cox engines.. but I keep a little can of light-oil in my field-box.. and squirt some behind the prop-driver.. and "hand-flip it in".. a few turns beforehand. The elec.-starter bursts that I imply, are short-bursts.. to prevent friction/heat between the case and drive-plate, and also to reduce the pressure of the crank-pin on the back-plate. It shouldn't take much... over hand-flipping; to start your engine with an electric-assist. If so; then there's something else that needs attention.

Thanks for the thoughts and opinions guys.

I must say I had fun evaluating this engine and scratched an itch that I have nurtured for a long time regarding the wisdom of clean vs. don't clean.

Every model engine ever produced started out "clean" so in effect we just restore it to that original condition.  The difference is, a used engine has been "broken in" some to it's benefit, others not so.

Outside of of my "new in the box" engines and engines that have never been ran 90% of them get cleaned to some extent with new gaskets and parts as required installed, then placed on a stand never again to be ran.  Some, like this one are set aside to be used in future builds.

This is the first vintage "Made in Japan" on the left bearer engine that I have ran "dirty" then cleaned and ran again.  Actually I was pretty impressed with both events.  Dirty, it started hard but ran well, cleaned it started on the second flip and ran almost as well but didn't lean out to high RPM.  Also, I wasn't using the best fuel.  Sidewinder, a car engine fuel with 20% nitro and 10% probably synthetic with added castor.  Not great stuff, but I'm going to use it up.  Got some 5% with 29% castor waiting though for my next test on a soon to arrive .19 Enya in similar condition. 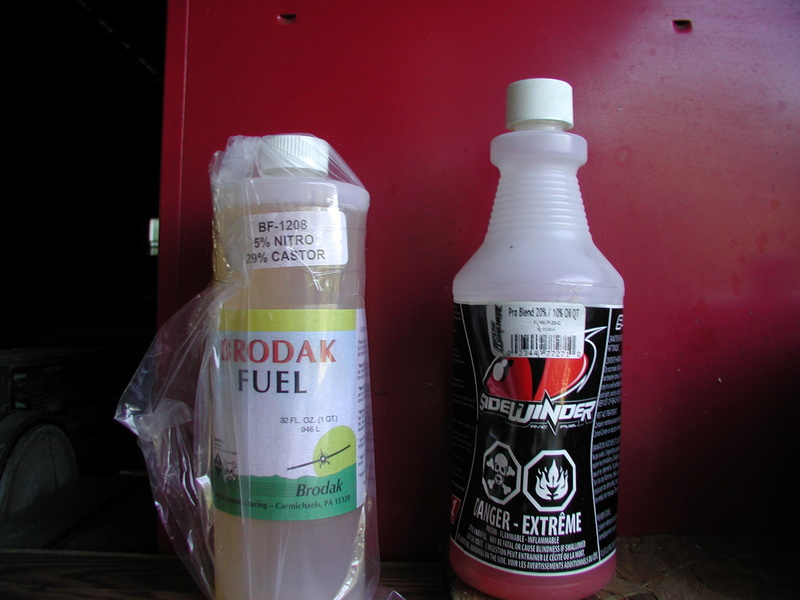 BTW, I always hand flip, sometime resorting to a leather glove on .60 size engines. I only use an electric starter when my right arm is ready to fall off. You just get a feeling when an engine is going to kick back and crack your knuckles. Those darn little .049's are famous for that and I have the scars to prove it. I will use an electric starter when all else fails though taking heed of roddies lubrication advise.

I have bought many engines with grooved spinners though, so electric are quite popular.

I would leave the piston and cylinder from being cleaned. In a well used engine on castor oil there is a precious varnish film that's been built up during the years and you don't want to loose that. The rest can all be cleaned and gaskets replaced etc, just don't touch the liner and piston.

If the engine is not too worn you can probably replace the varnish by running it on all castor fuel again. But running it on modern "car" fuel sounds like a bad idea...

@Surfer_kris wrote:I would leave the piston and cylinder from being cleaned. In a well used engine on castor oil there is a precious varnish film that's been built up during the years and you don't want to loose that. The rest can all be cleaned and gaskets replaced etc, just don't touch the liner and piston.

If the engine is not too worn you can probably replace the varnish by running it on all castor fuel again. But running it on modern "car" fuel sounds like a bad idea...

I don't know if I could sleep at night knowing about the gummy build-up between the case and the outer cylinder wall.

These hard run engines usually have a circle of "coke" built up at the top of the cylinder that actually helps remove the cylinder from the case when heated with a heat gun. Piston and cylinder come out as a unit when pushed from below.

As mentioned I usually buy the worst of the worst Enya's most needing emergency room care, engines with broken fins with most of their useful life behind them. But, it is "hard to wear out an Enya" and I bet most would still run and run well with a few castor runs. I just have too much fun making these look within limits like new again.