» Gilbert SkyFlash - Maybe not trash after all
by Oldenginerod Today at 8:12 pm

» Parody of an Already Crazy "I Crashed My Plane" Video
by Kim Today at 2:10 pm

» Cool Looking prop
by Dick Russ Yesterday at 8:56 am

Landing-gear on 1/2A size (and smaller..) model airplanes is not always preferred.. but I’ve always felt that it adds a scale realism and is also functional.

There are pros and cons, as one can imagine. If a model is intended to launch by ROG (Rise off Ground) then a landing-gear is obviously required. If the model must land on pavement, then it will need an undercarriage to protect the airframe from shock and abrasion. These points I would call “pros”.

Another “pro” is being able to tweak the models’ center of gravity via wheel-weight.. which I would consider to be a functional advantage. The wire-struts can also be adjusted (bent) fore/aft providing additional c/g trimming.

Some “cons” might be the added weight and aerodynamic-drag induced to a model that was built for a certain purpose. A control-line combat model (often a flying-wing) wouldn’t have a landing-gear. Scratch-builders may elect to omit L/G, if none was specified or illustrated on a plan or drawing. Even “if” a gear is shown.. some people don’t want or feel the need to fabricate one. Keep in mind, that a tail-dragger gear-design in a scale-like location on a small model could cause nose-over crashes when taking-off or landing.. especially on a grass field.

Materials usually include music-wire for the strut(s) which must be formed (bent) with an overall length to account for a “mounting” to the model. A strut formation must be long enough (with a subject wheel-tire mounted) to provide adequate clearance for subject propeller(s) and have an axle; long enough to accept a wheel or ski and a retention collar. Wire diameter for “mains” on a 1/2A model is generally .047”/.062”.  (1.2/1.6mm). Music wire in these sizes is relatively easy to source. K & S metals may still offer 36” lengths.. which is what I’ve bought. A single 12” length is generally enough material to form an inverted “V” gear for most half-A tail-draggers. A tail-skid can be as simple as a toothpick or sm. hardwood dowel.

I designed my 1st ever tri-cycle gear for a self-designed profile Lockheed T33 for the CEF 2017/18 Speed Contest. The wire is .062” dia. I used an inverted-“V” for the mains located approx. mid-chord in the fuses’ wing-slot and angled straight-down (90 degrees) The nosegear mount ties-into the lower beam engine-mount; is slightly longer than the mains.. and is angled slightly aft.. in an effort to dampen the shock of landing. 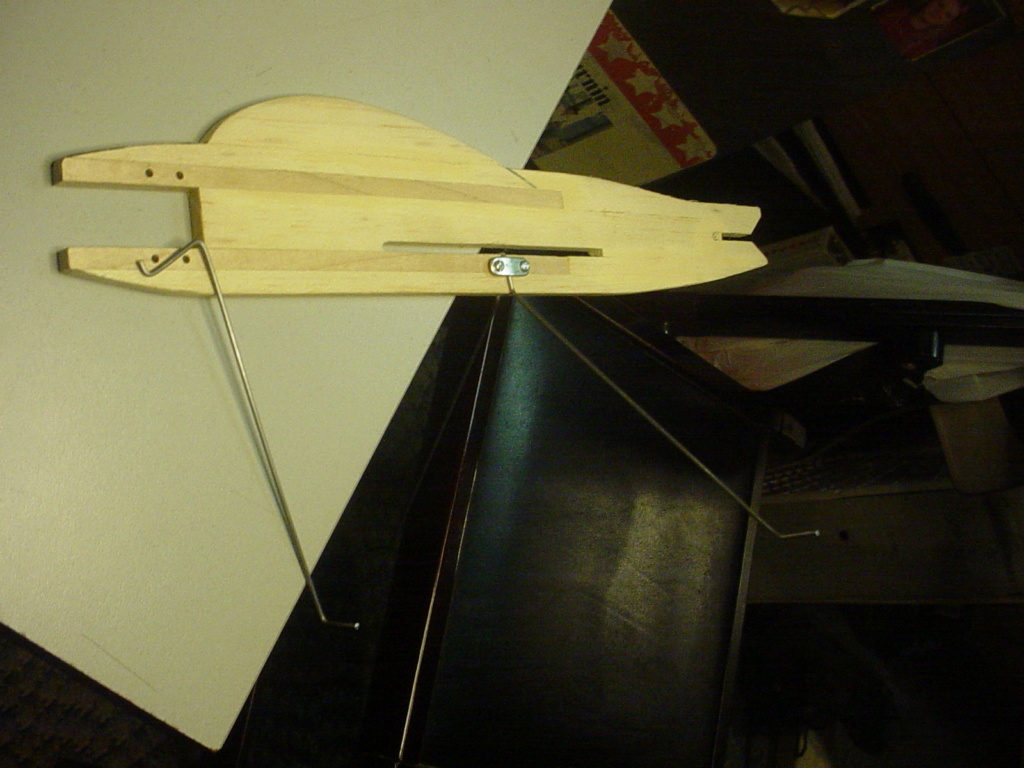 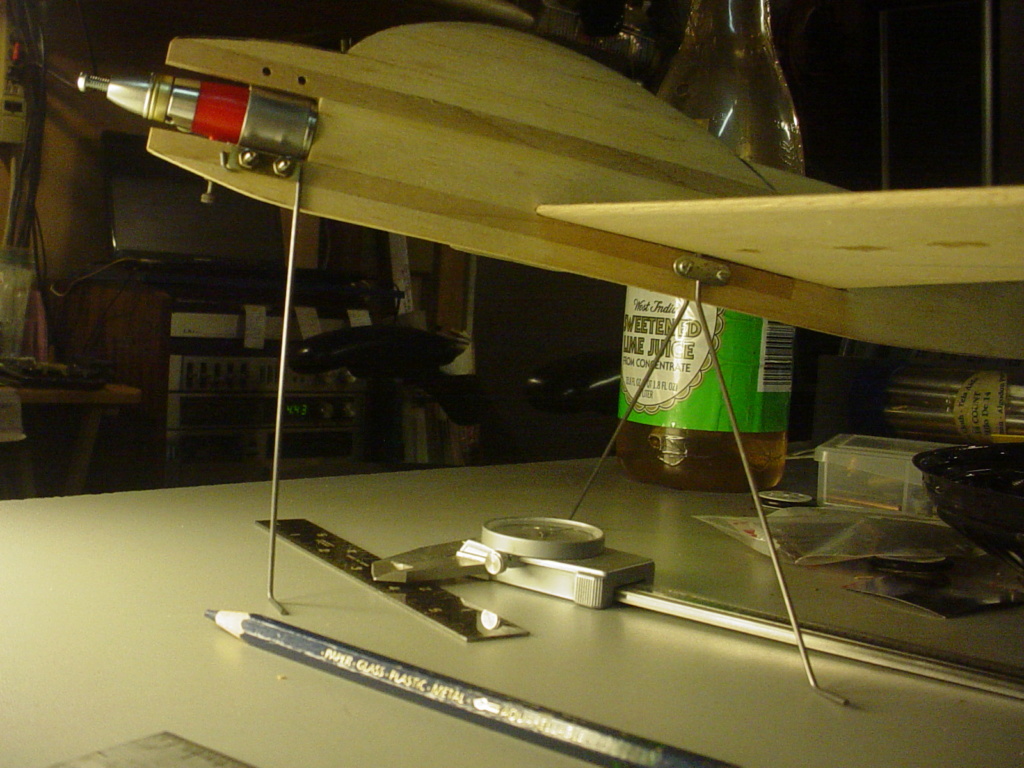 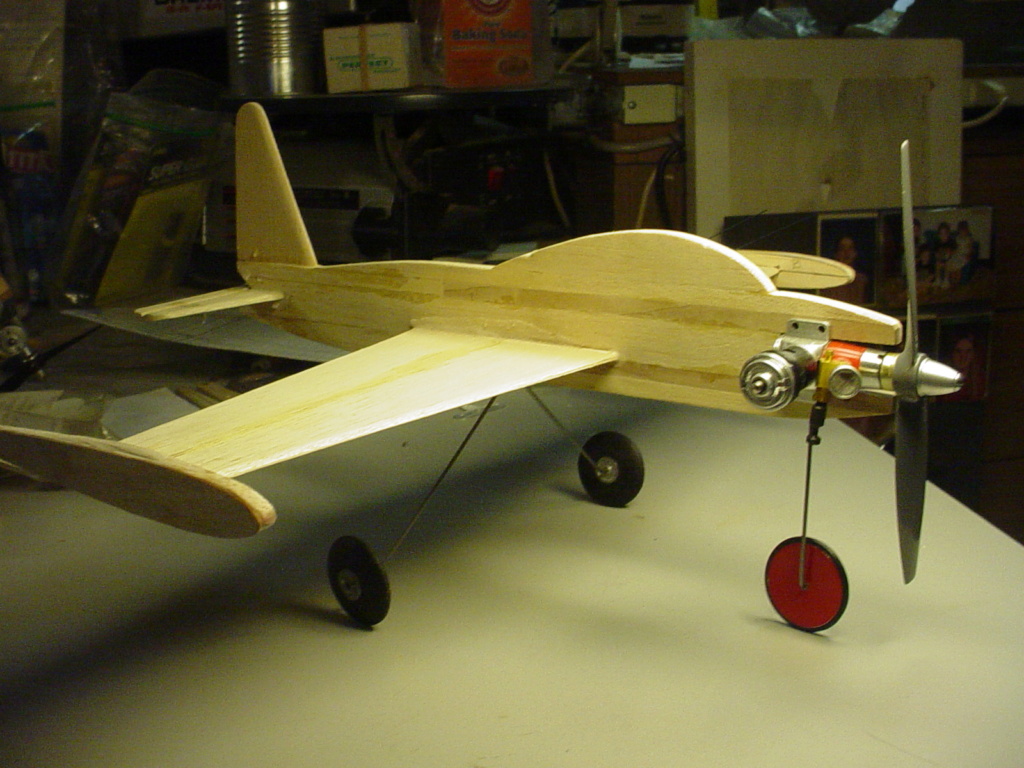 More recently I designed my 2nd  half-A C/L model scratch-build of yet another Lockheed warbird; My profile P38 which I would design a different-style tricycle gear for. Its’ twin-booms/engine-nacelles required independent main-struts to provide for straight-ahead tracking. 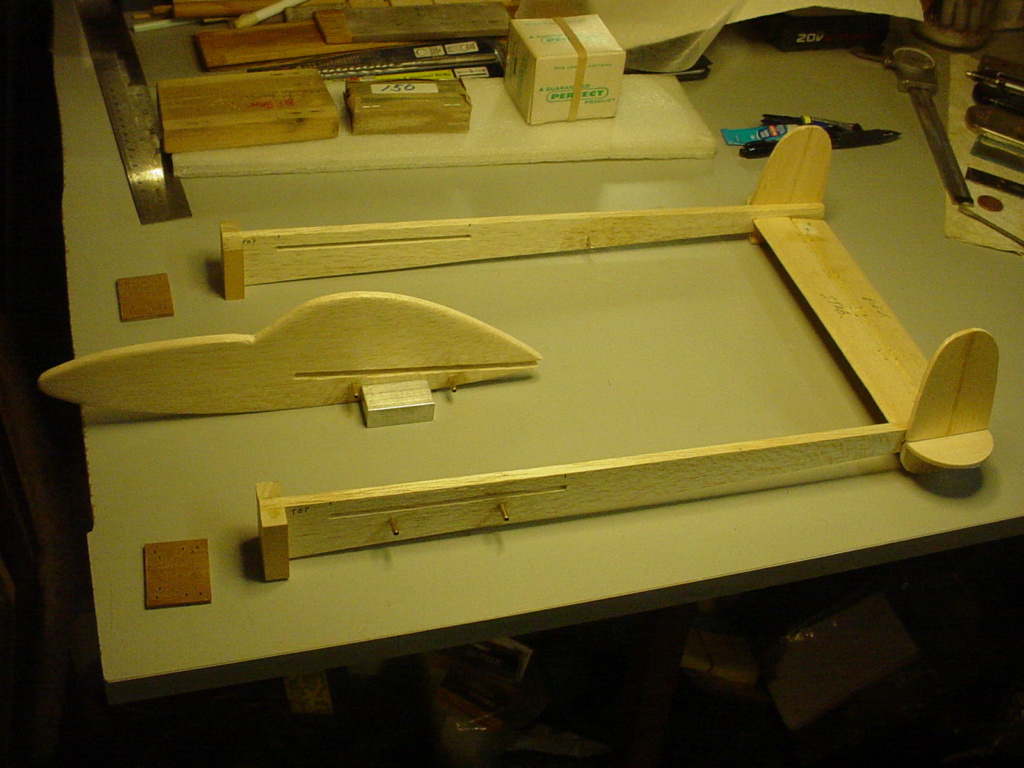 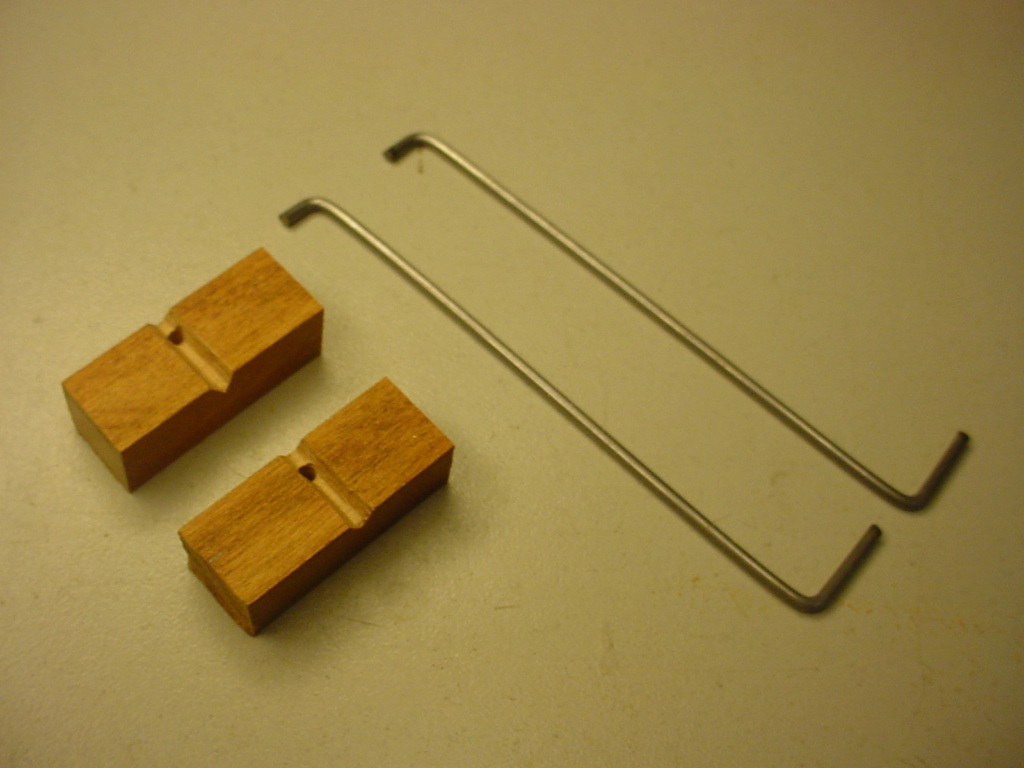 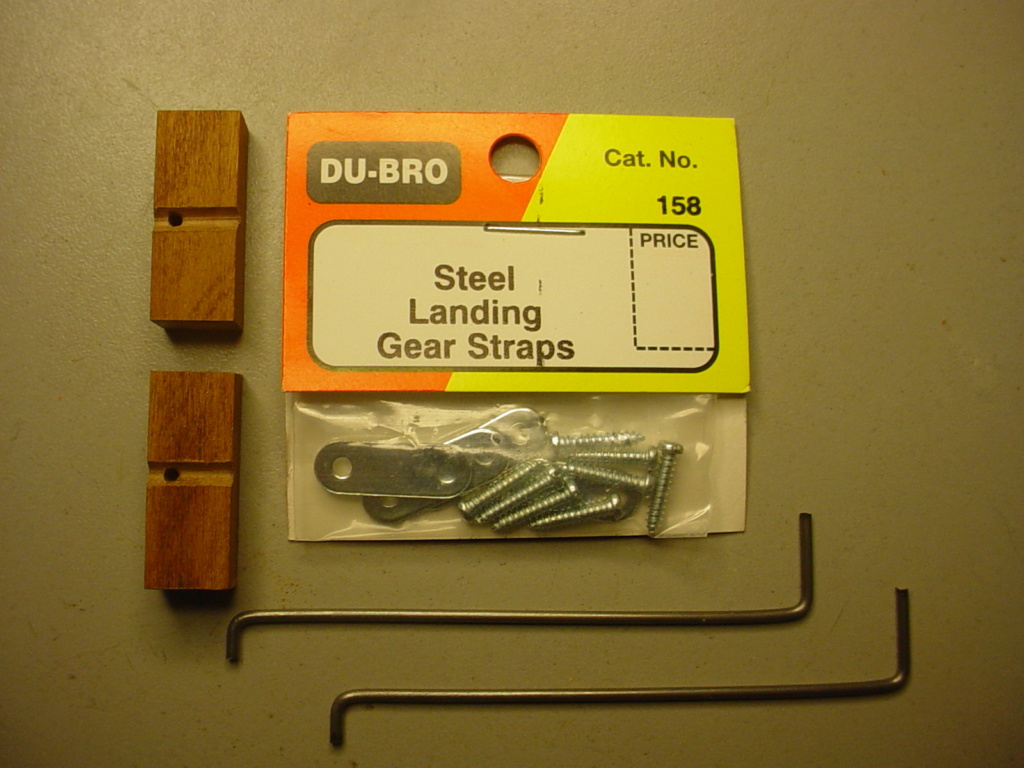 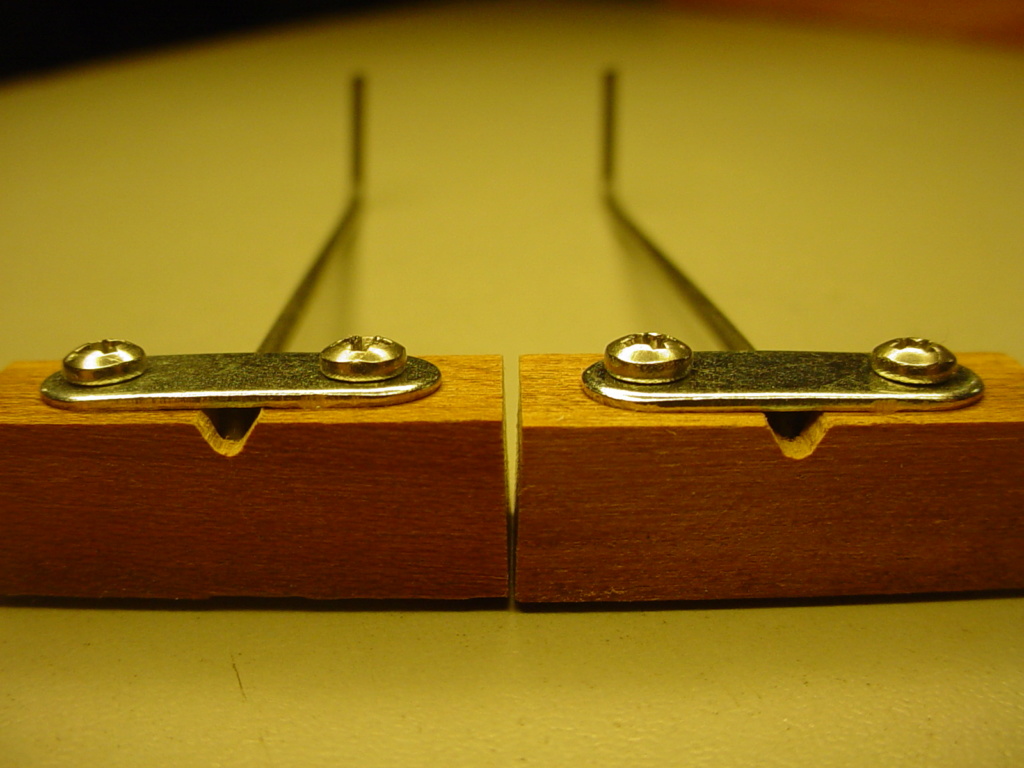 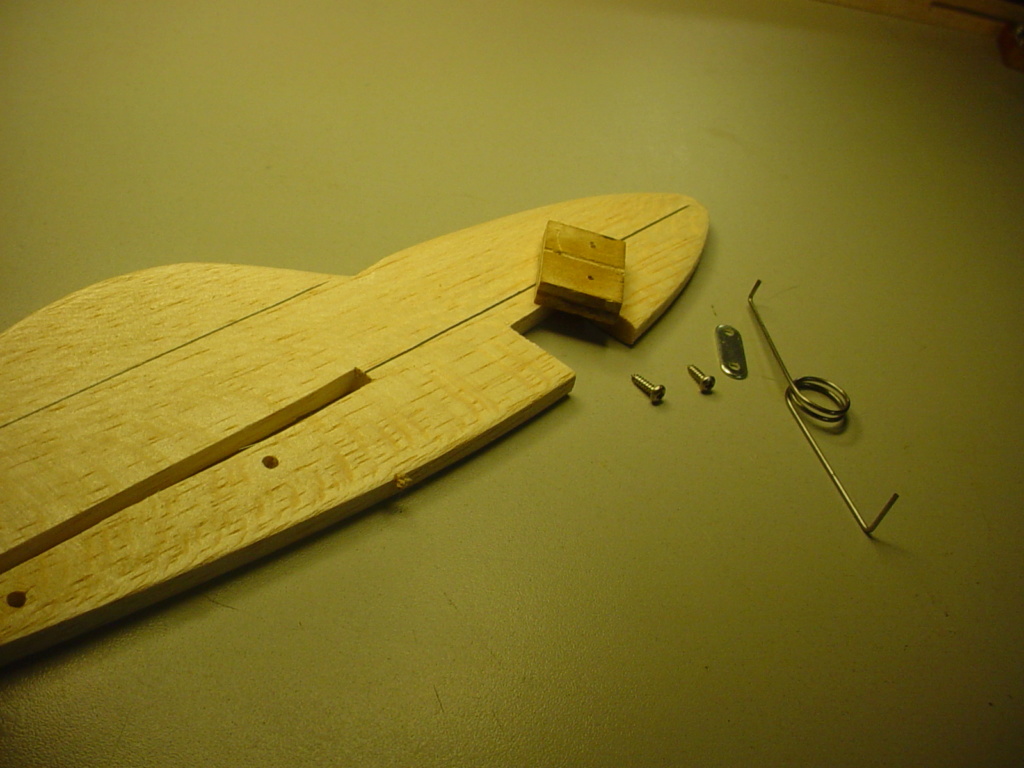 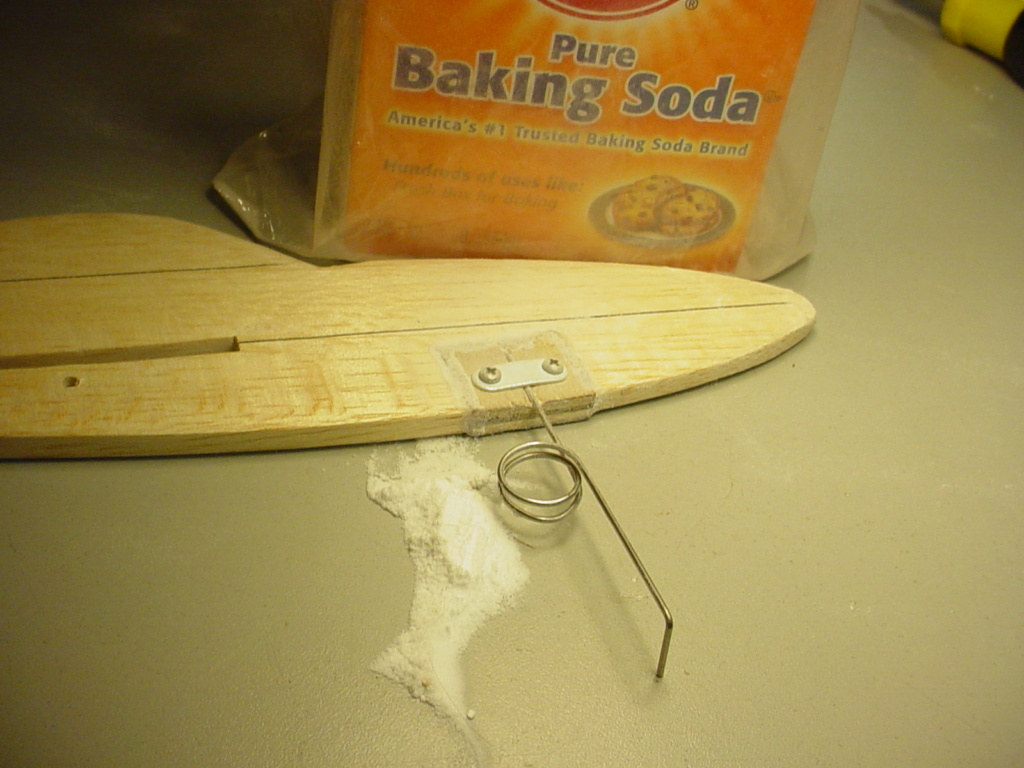 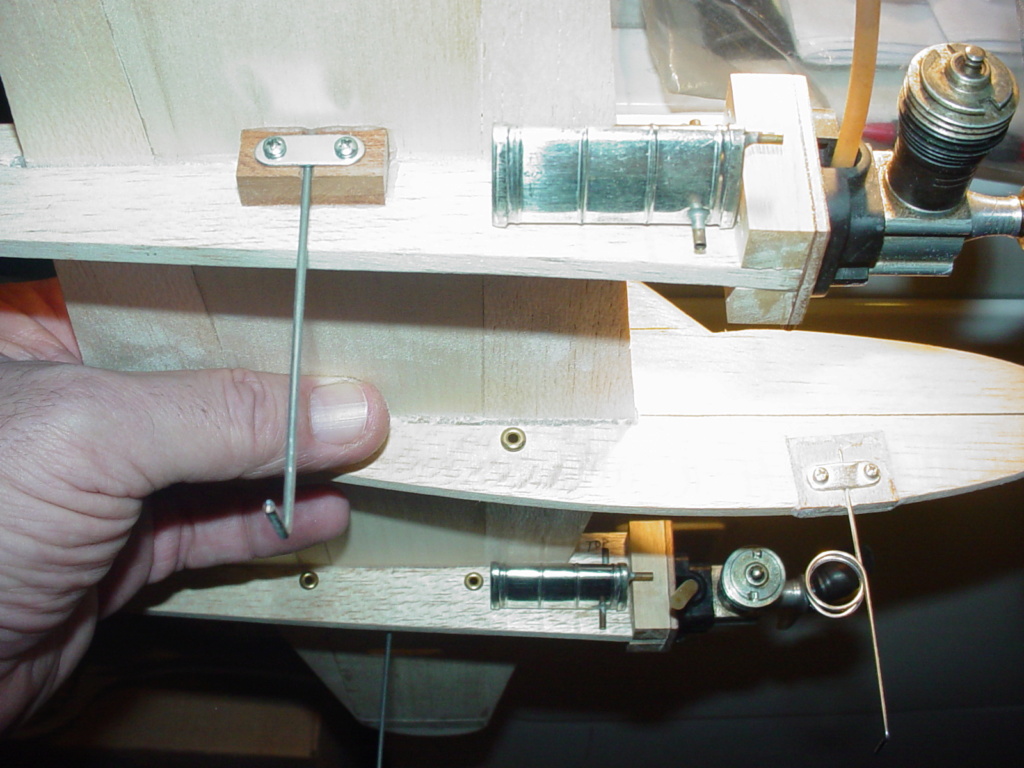 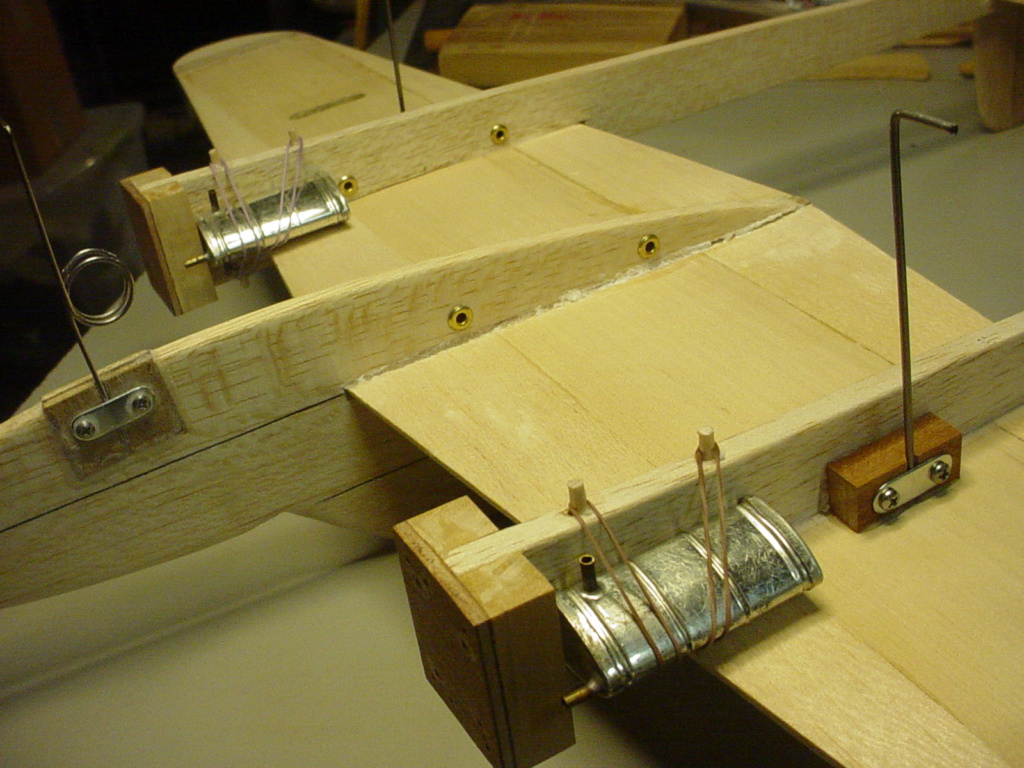 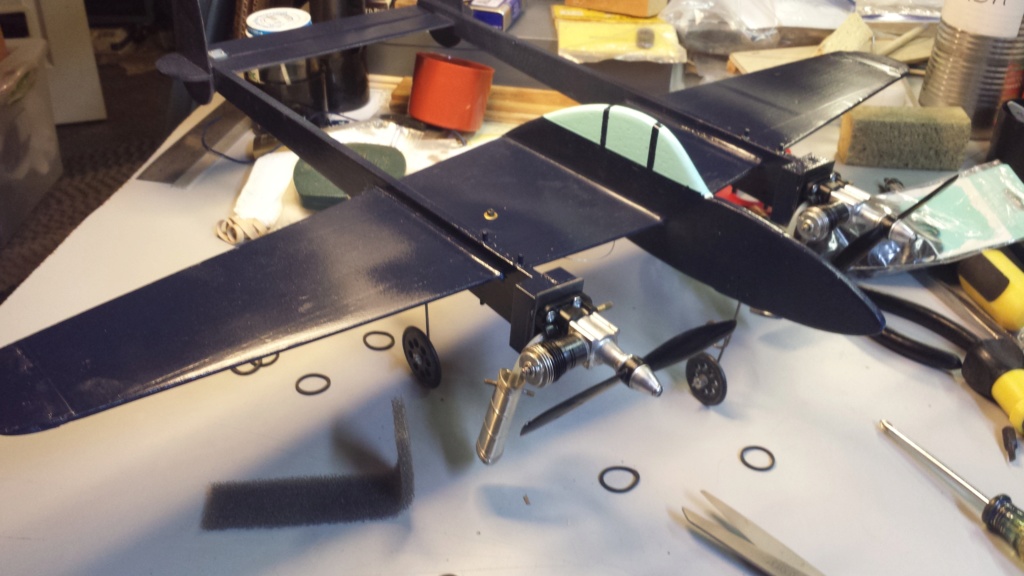 My very 1st experimentation with a scale-like tail-dragger gear-design was what I came up with for the 1st annual CEF profi-scale speed-contest, in my 16” span model of the Grumman F8F-2 Bearcat/Rare-Bear.

I wanted scale-like (independent) gear-struts.. UNLIKE the common "inverted V"  that is often found WAY up-front on profile model kits.. or saddled in the fuse's wing-slot and strapped-against plywood nose doublers.

A sheet-balsa wing (alone..) would not be enough support for the upward shock of independent gear-struts on a less than graceful landing. I chose to build a 1/8" (3mm) thickness sheet-wing having a half-span hardwood "strip-spar" for two main gear-blocks to mount to.

Note the dark wood in the photo below.. I think it's Mahogany. It won't break.. 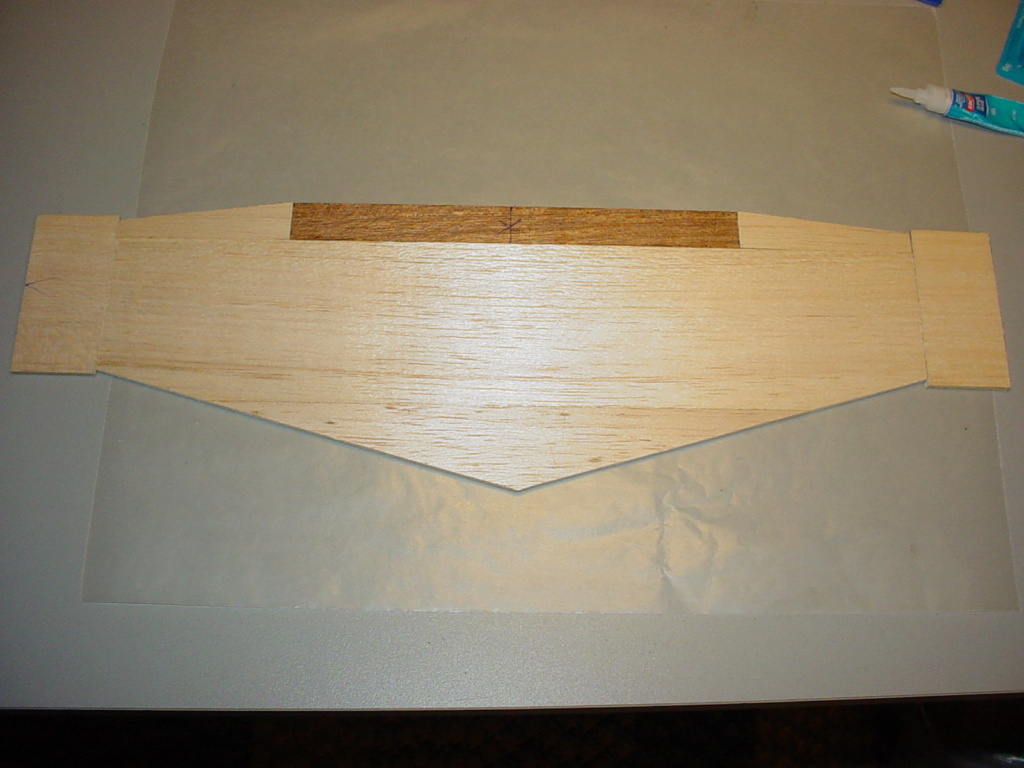 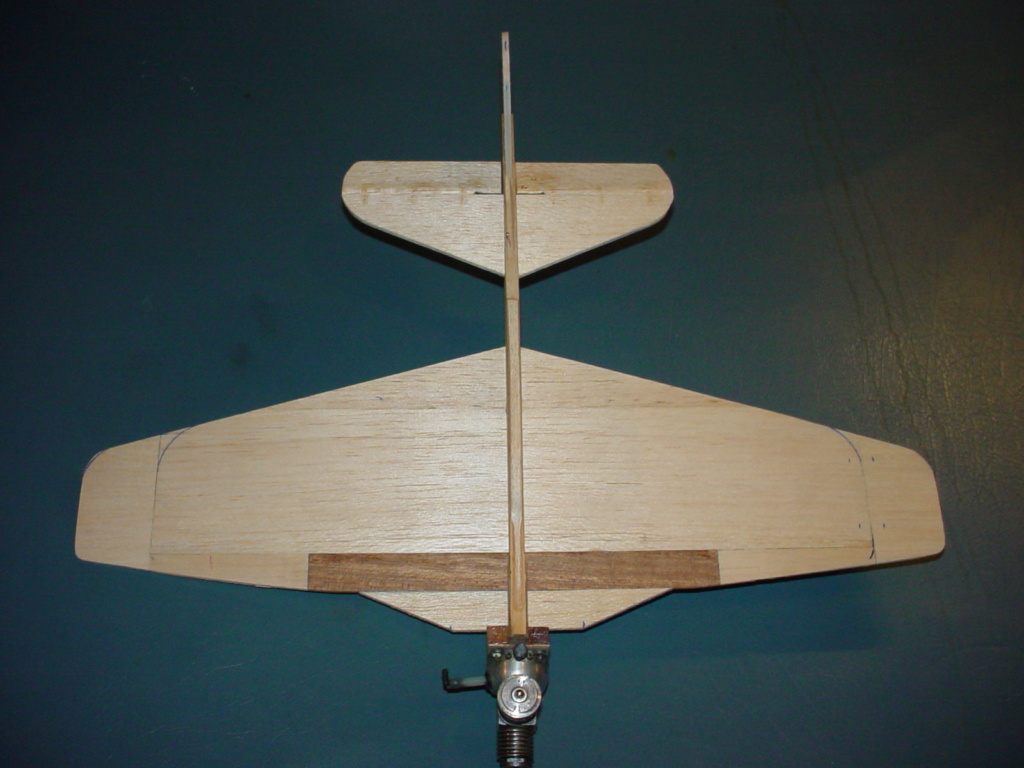 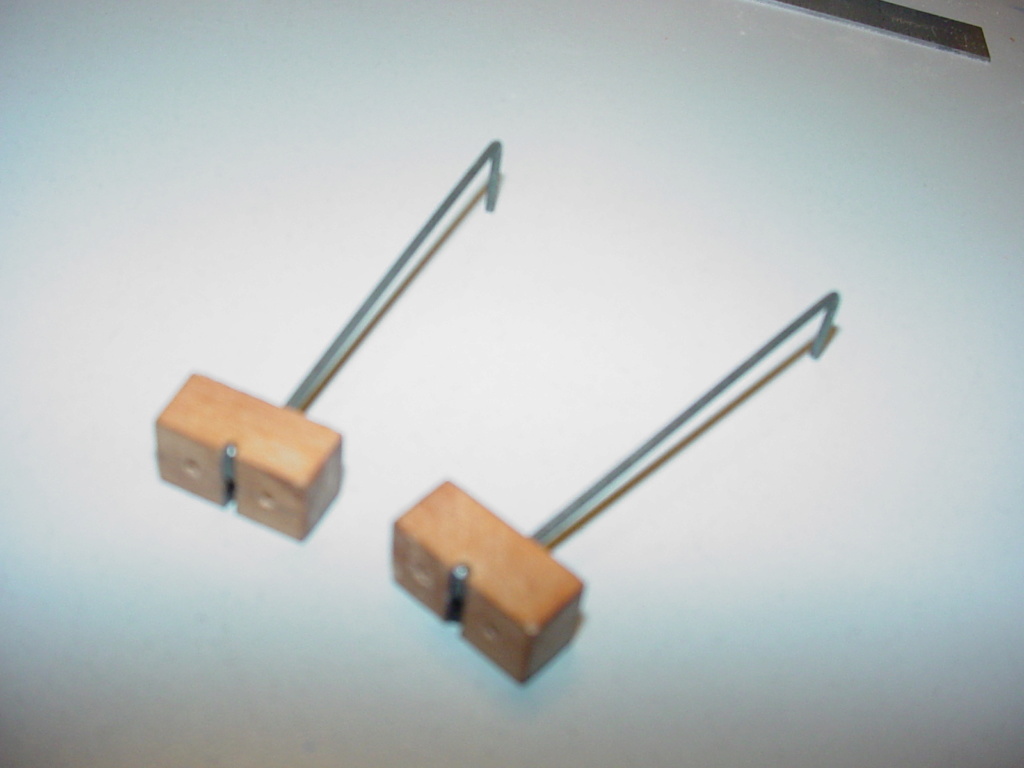 This type of strut assy is made by drilling-through the gear-block to receive a straight-length of the strut-wire. The block is then "notched" to accept a short (1/4")  L-bend (90 degrees) which is made in the strut-wire AFTER it is inserted through the block. The lower-strut's length is then measured, cut and bent 90 degrees to form the axle. This assembly is now captive. It's important to be accurate when measuring for the bends. We're making a "pair".. and they need to be the same length. The axle's length can vary slightly.. but if the o/a strut-lengths vary.. it will show-up on static-display.. and there's not much you can do to correct that after the fact. Yea.. it's a bit of fuss, but it makes for a more stout/scale-like main gear.. and if you're like "me".. you find this type of challenge enjoyable. Maybe it's because it's "smaller".. and takes more patience or ingenuity to design/build a particular component?

Here are the pair of strut-assemblies with simulated gear-doors made from clear plastic sheet.. 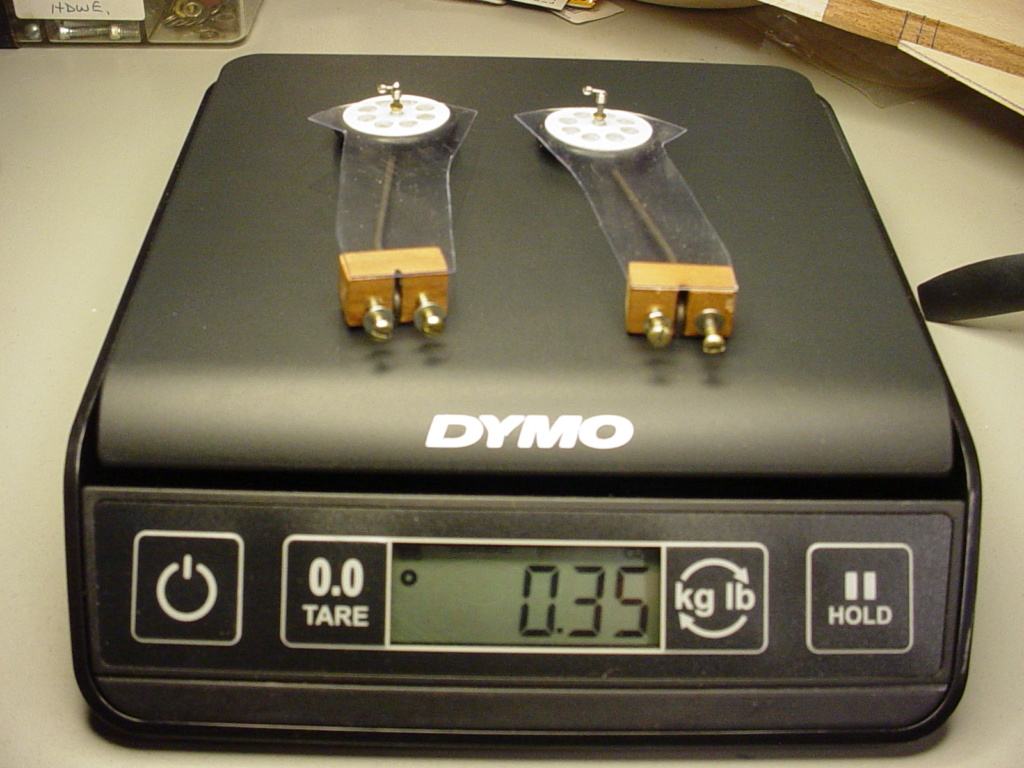 The hardwood strip-spar; I ripped a piece of 3/4" (19mm) hardwood to the same thickness of my sheet-balsa wing.. and butt-jointed together with CA. The strip is approx. 1/2 the wingspan.. or 8". It's not terribly heavy for what it does.. and being designed as a speed-model; I wasn't terribly concerned with its overall weight. 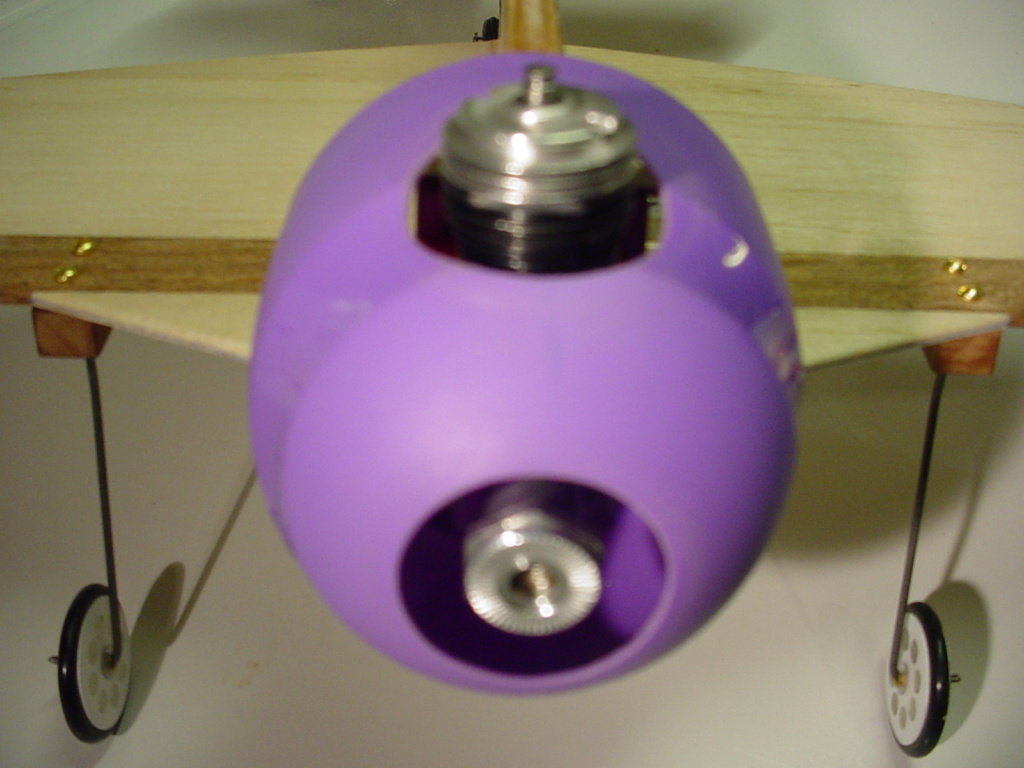 The gear-doors are simple to make. The wheel-collar locks them onto the lower-end.. and the upper section is fastened to the gear-block; trimming-out the entire strut assembly nicely. 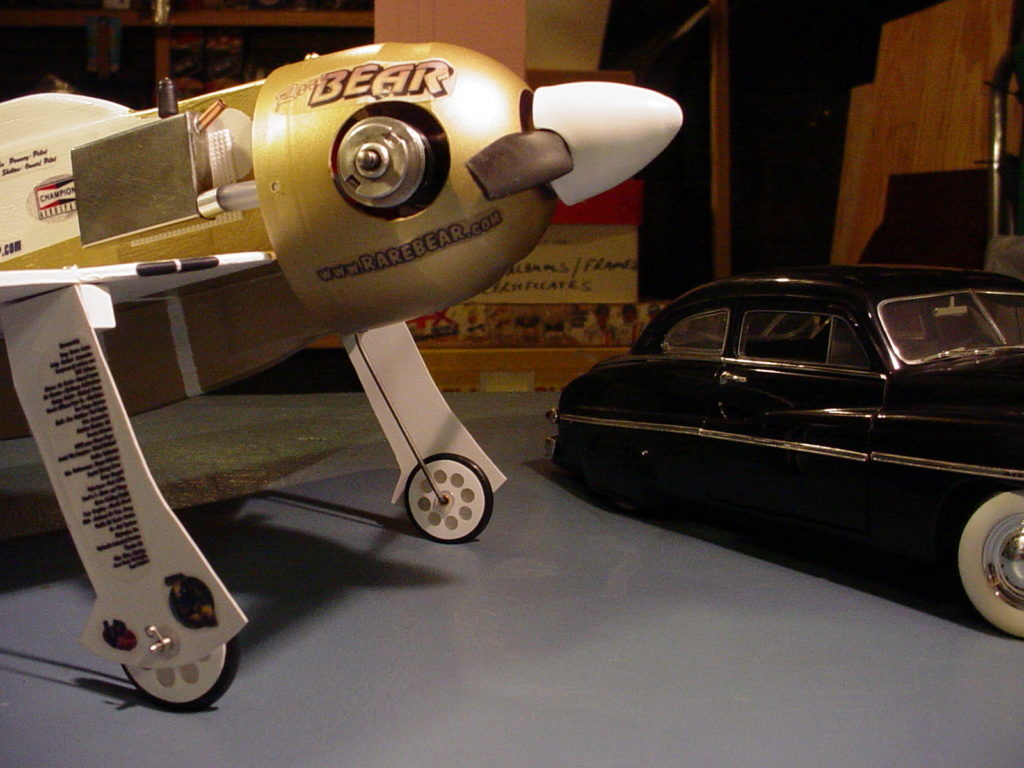 I have to admit that I enjoy the designing/fabricating/building-processes quite a bit. I wish I had the same patience.. when it comes to finish/painting..

Great tutorial roddie. Thanks for taking the time to do it.

I hadn't seen baking soda used for filler, does that work with C/A glue? Do you find the joint crumbly at all?

@NEW222 wrote:Great tutorial roddie. Thanks for taking the time to do it.

Thank you Chancey, It's a pleasure for me to share some of my methods here.

@daddyo wrote:I hadn't seen baking soda used for filler, does that work with C/A glue?  Do you find the joint crumbly at all?

I haven't used baking soda as a filler. Sometimes I use baking-soda as an "accelerator" for the C/A glue. Occasionally a C/A glue-joint won't "set". Sprinkling a "pinch" of baking soda over the problem-area usually helps. I believe it has something to do with the two surfaces' to be joined; pH levels. This can also happen when joining dissimilar materials with C/A glue.

Be careful not to use too much of either; C/A or baking soda in areas where a smooth-finish is wanted. IT DOESN'T SAND WELL.. and on balsa.. this can be disastrous.

There are small pump-spray bottles containing a "liquid" accelerator for C/A glues.. usually sold by the hobby-grade C/A manufacturers such as "ZAP". It's sometimes called "Kicker". When a C/A glue-joint sets/grabs.. it's commonly referred to as "kicking". 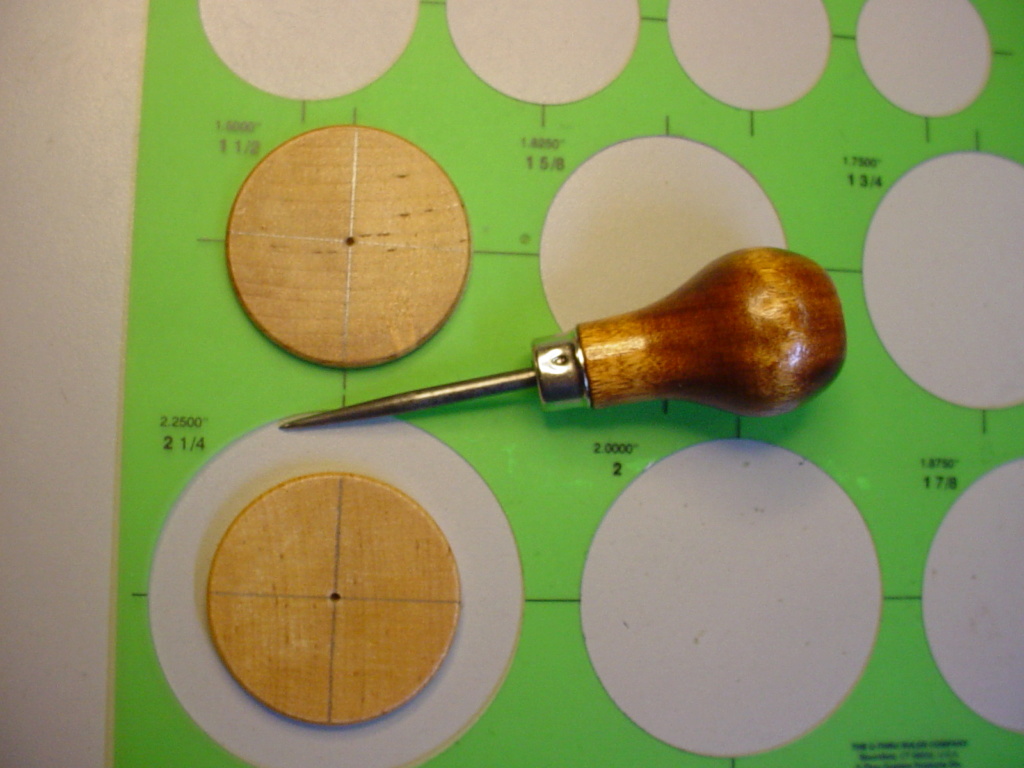 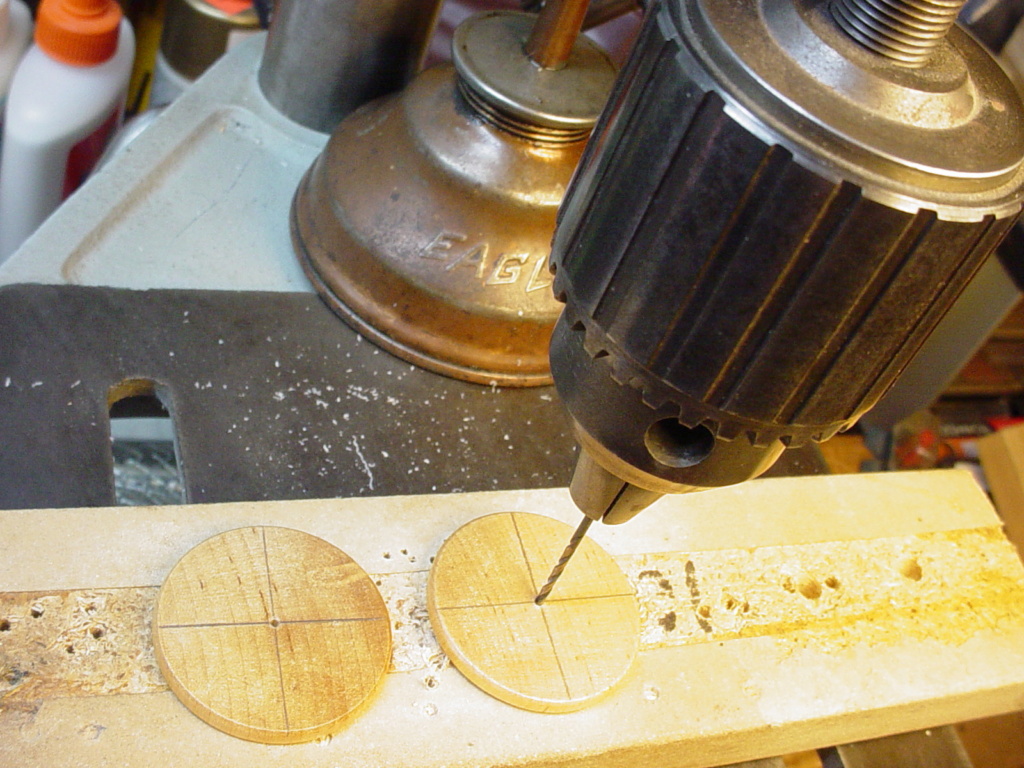 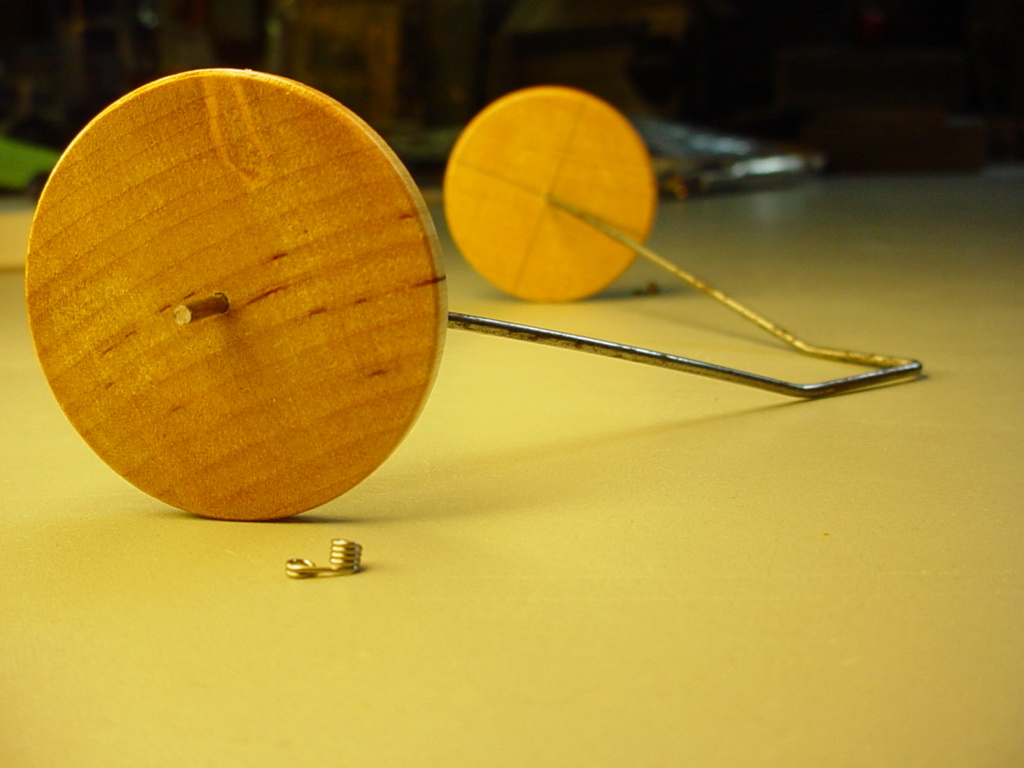 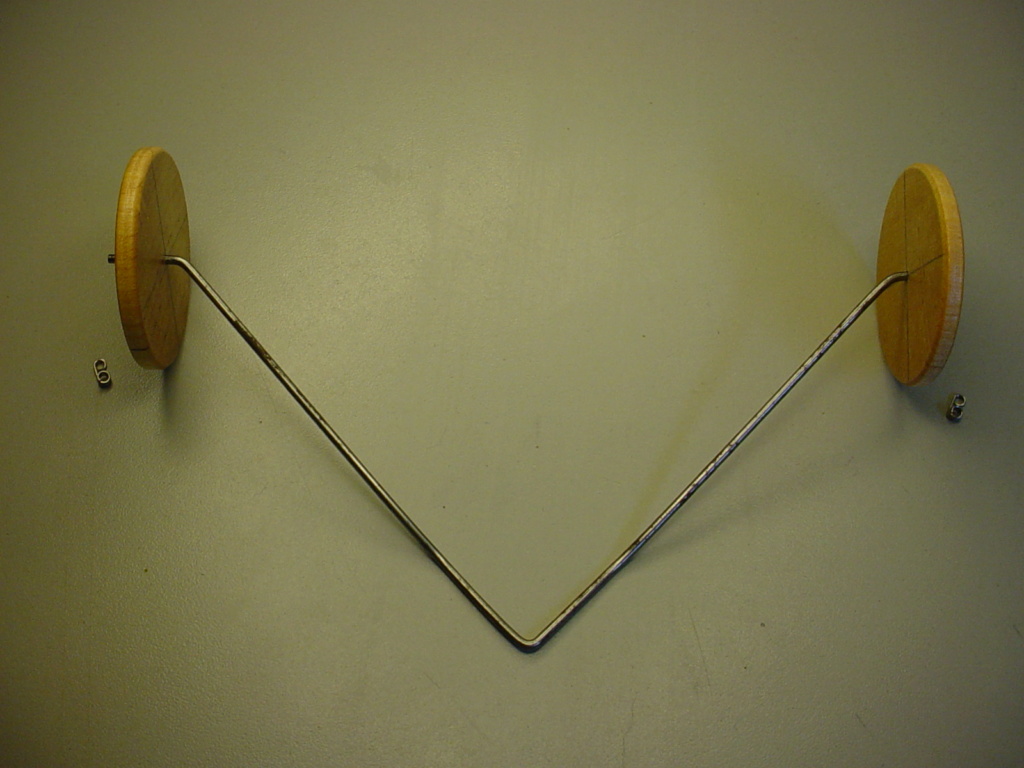 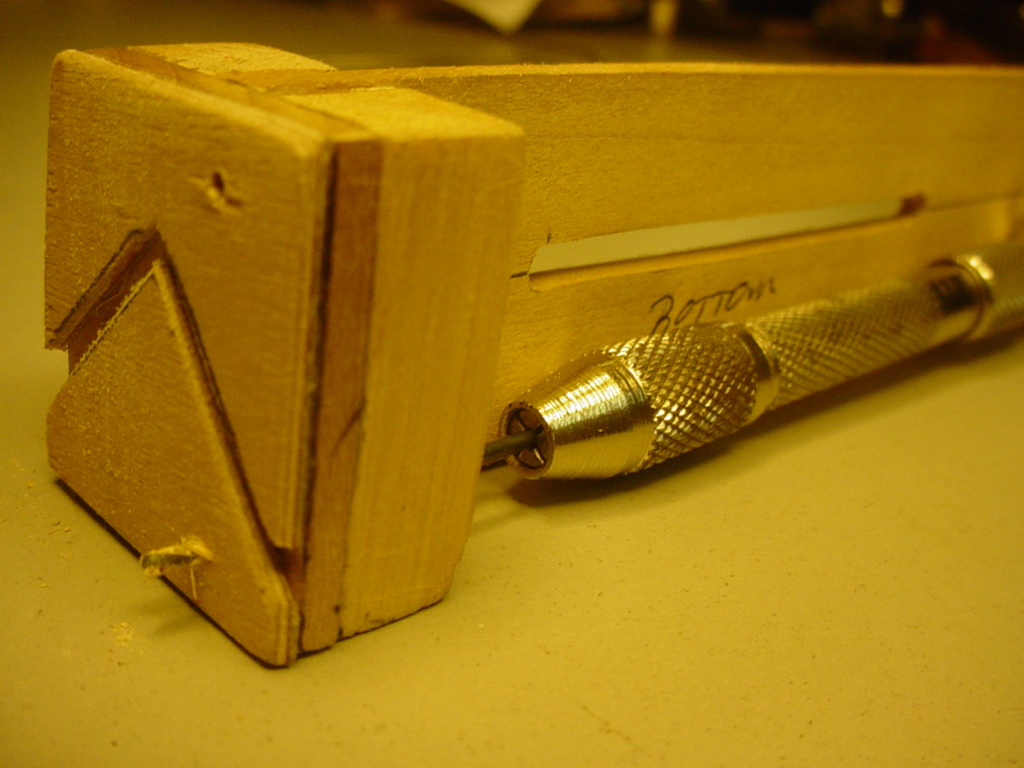 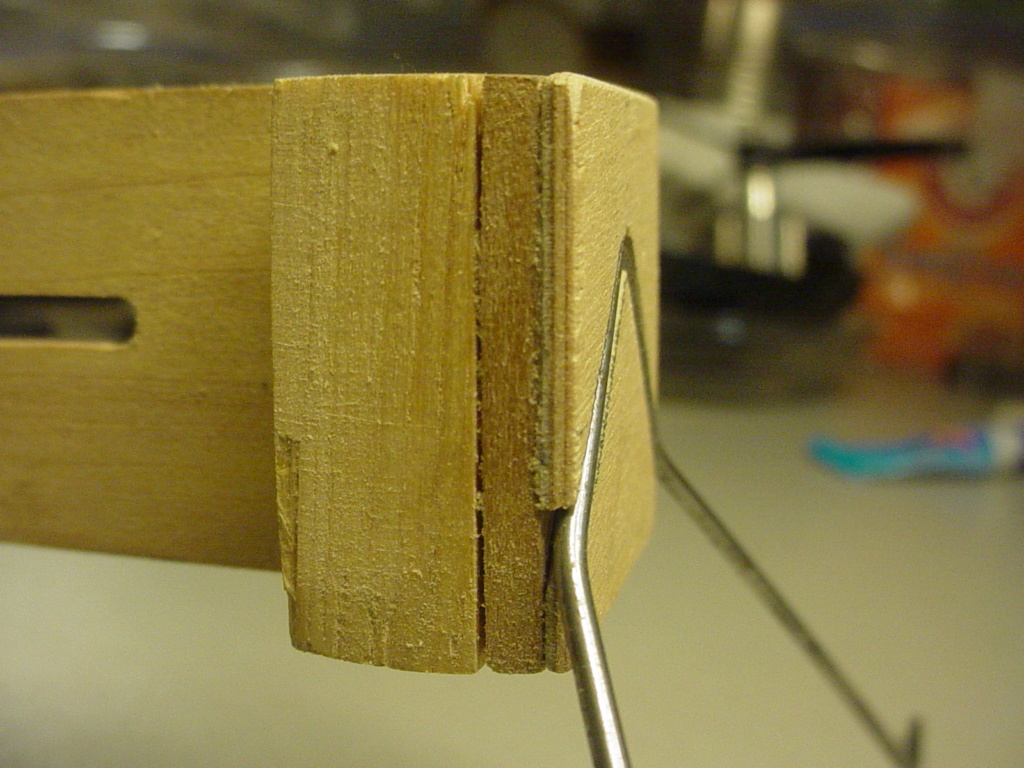 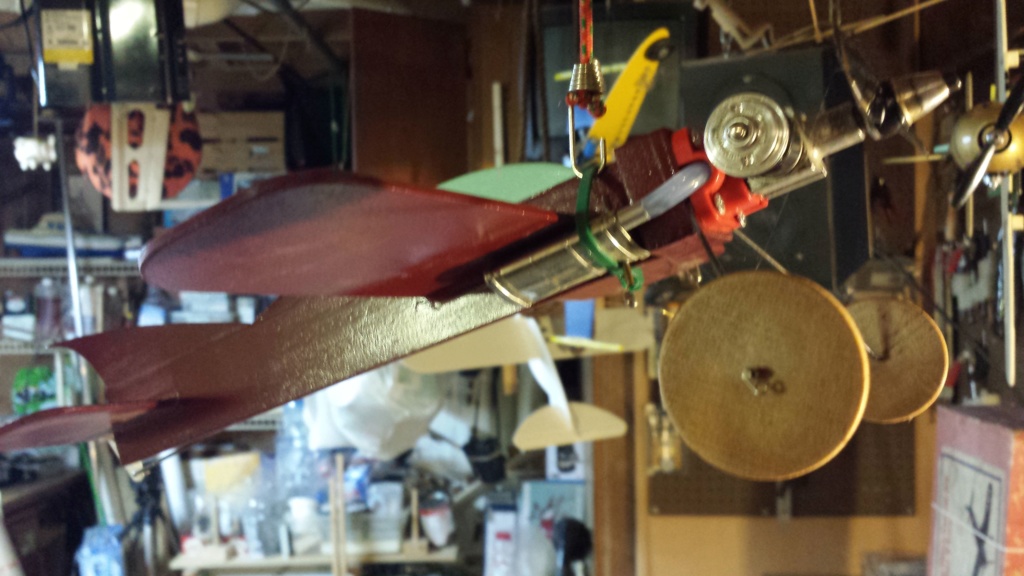