I have been emailing back and forth from a good friend in England, (Ian Russell)
I was telling him how getting diesel fuel for the little engines was getting harder and harder.
Ian was telling me of the cost of purchasing Nitro there in England.

One thing lead to another and I told Ian that I had a Cox diesel engine (never run) with the heavy crank (for diesel running)
and also had six spare Teflon disks to go with the engine.
With the previous back and forth emails Ian knew that I was collecting the small Enya .049 /.06 / .08 and .10 engines. 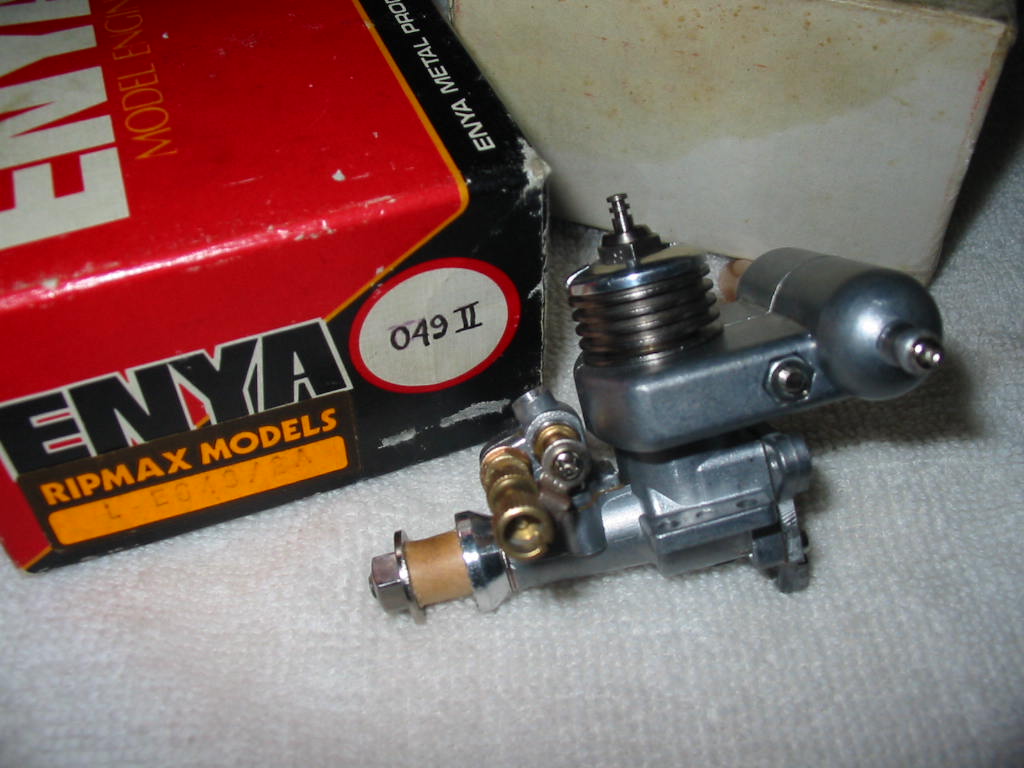 I did the deal and waited for the engine to come.
When it arrived it was a little tight from the caster oil slowly hardening, so I decided to got it a good cleaning.

Taking it apart, I found all of the little changes that Ian did to the engine.

1st was the head where the glow plug screws into. It was modified. 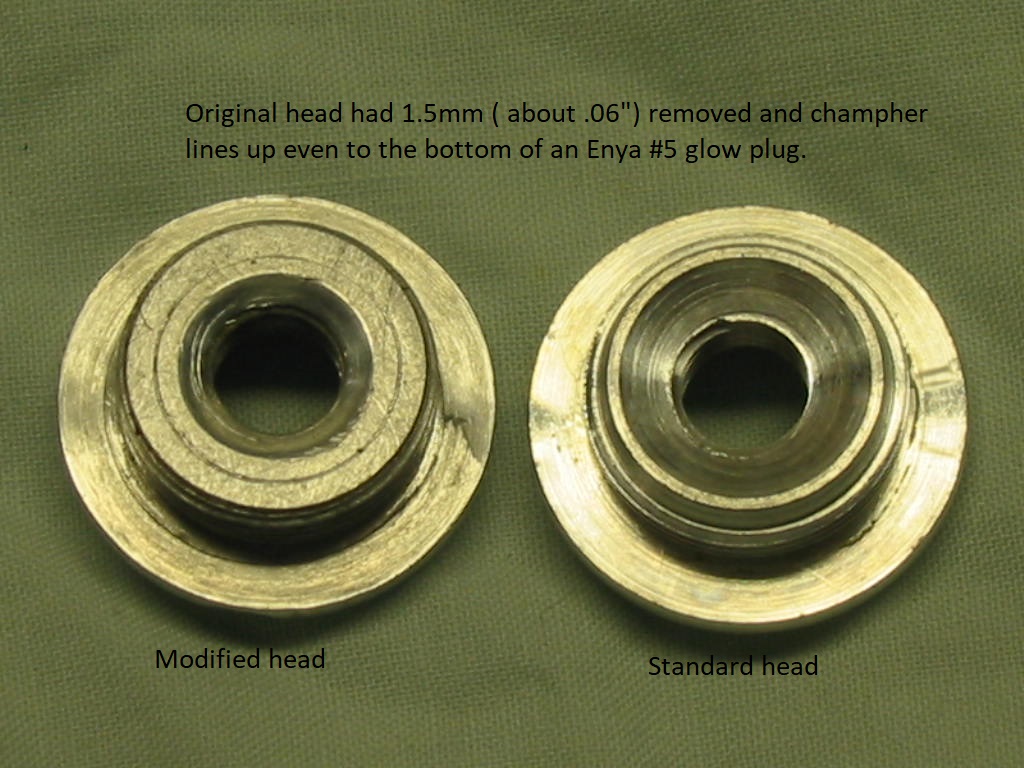 The next was the T.V. (throttle valve) with a small nylon tubing to reduce the bleed hole size ( for low idle) 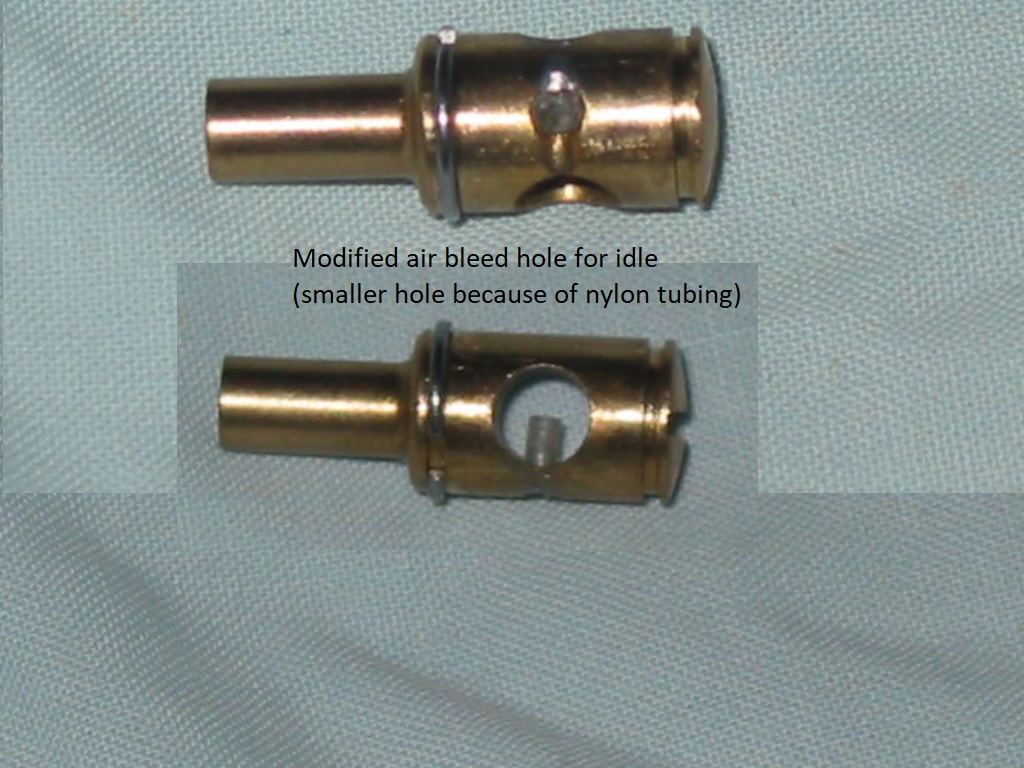 Then the crankshaft was worked over 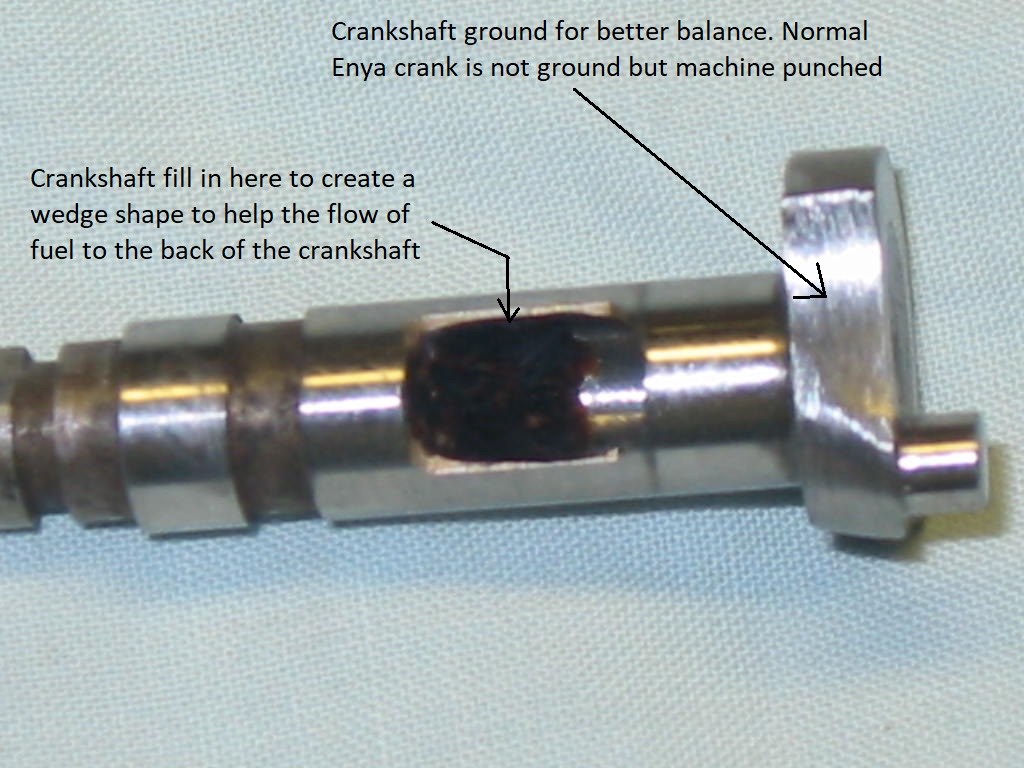 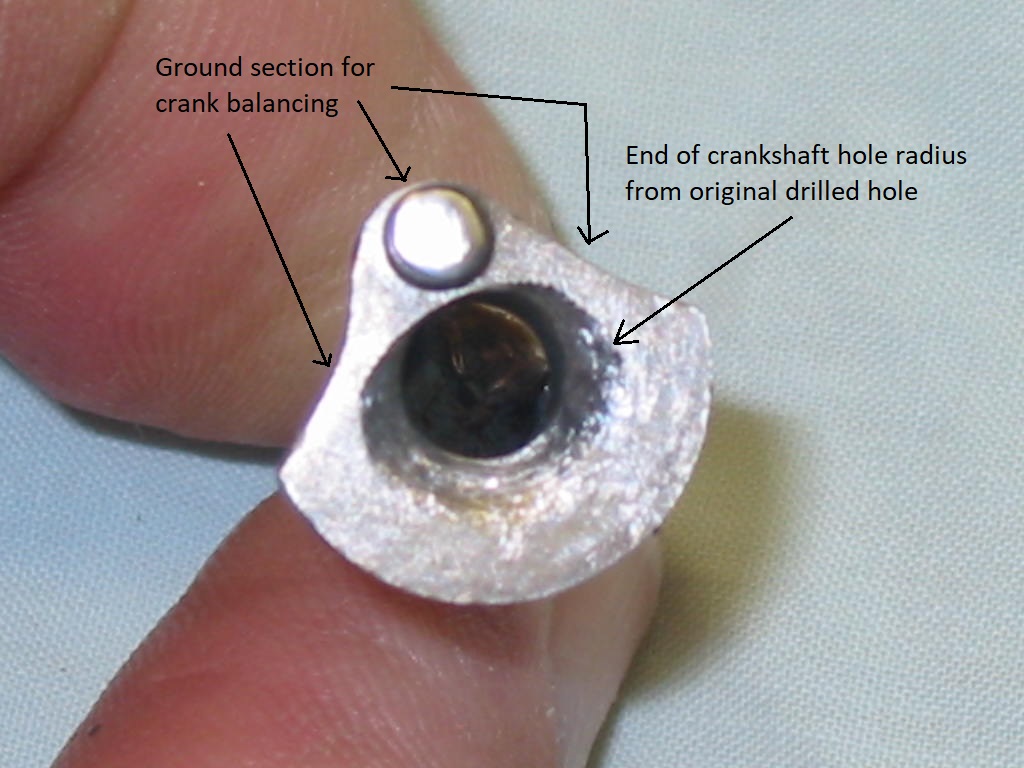 Next is saw some material removed on the crankcase where the ports would be on the piston cylinder. 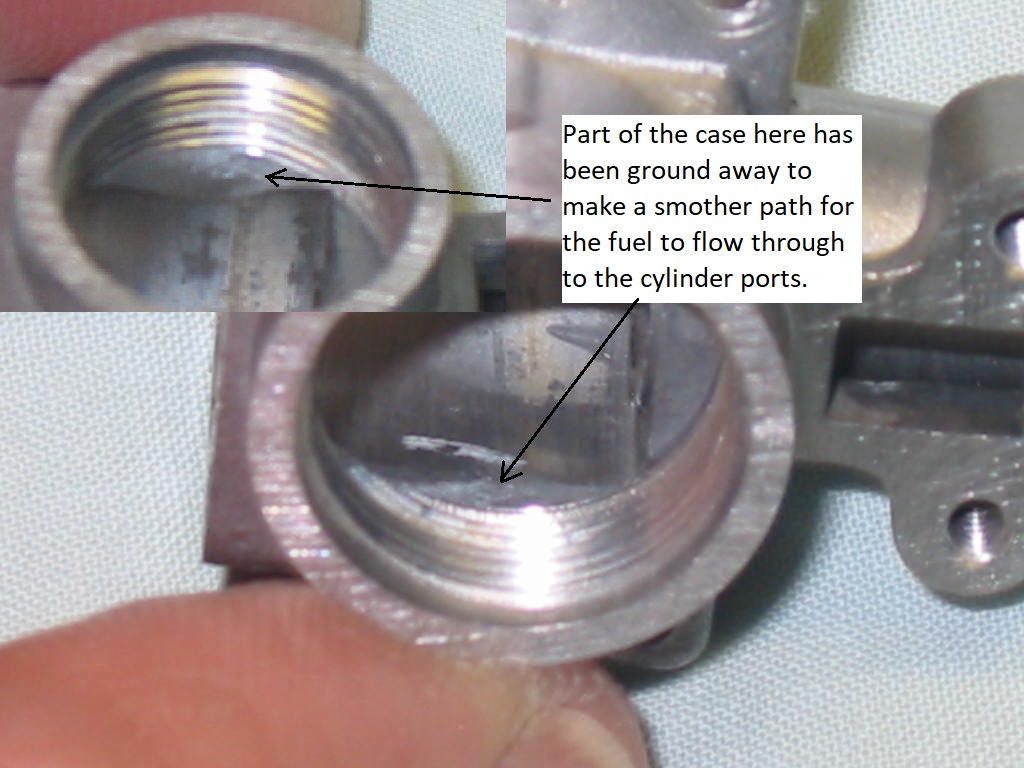 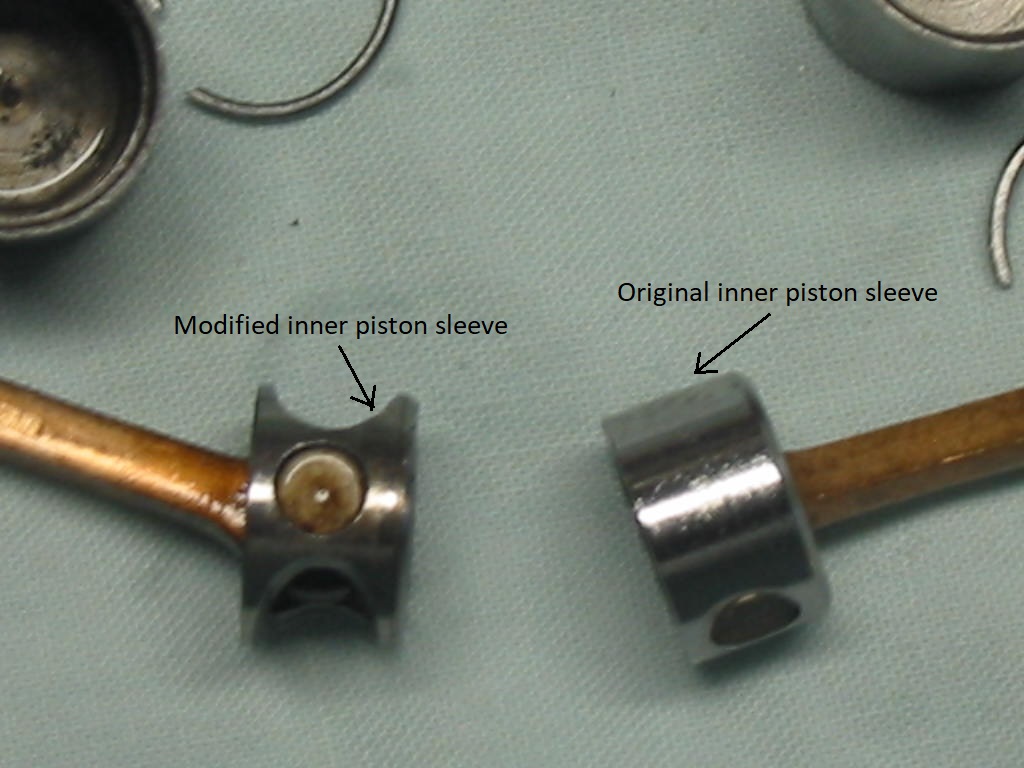 The last modification that I almost missed was the alignment of the cylinder head to where the exhaust ports are front to back and the bypass ports are on the side where the inside grinding on the crankcase would match. 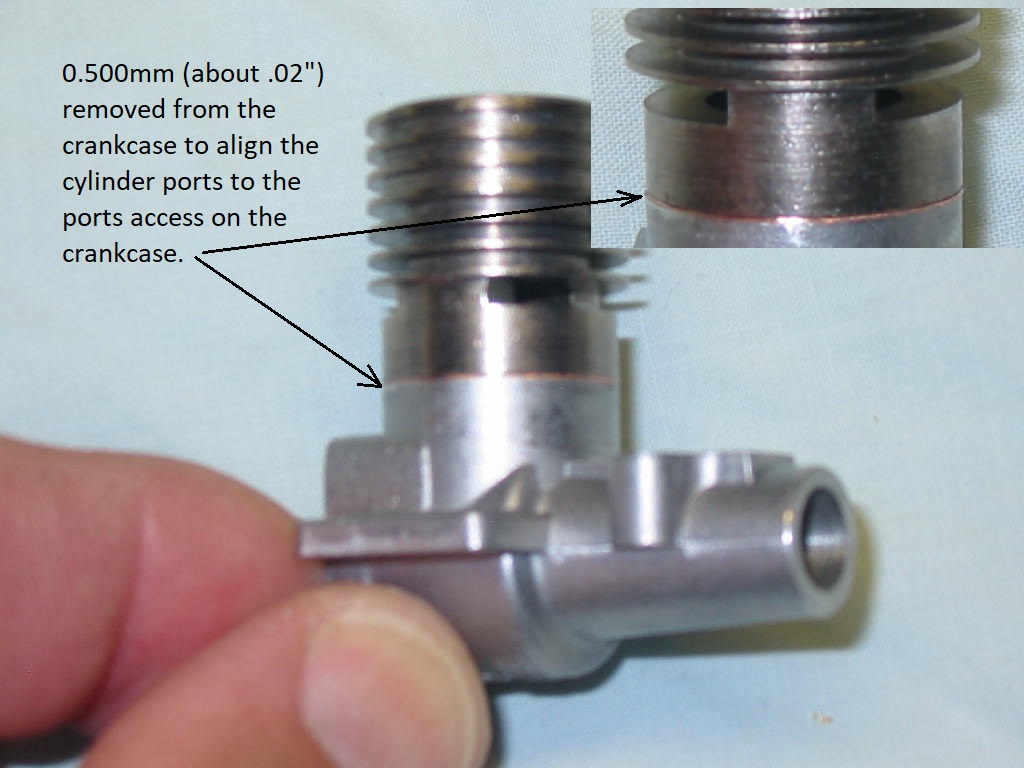 The stock Enya .049 compression ratio is 8.0:1 and these modifications dropped it to about 7.0:1
Like the Cox engine, I measured from the top of the piston to the shoulder of the cylinder head (like you can on a Cox engine.
It measured 0.600mm ( .024") smaller that a standard (non-modified) Enya .049.

I wonder how much more could be taken off the crankcase to increase the compression ratio and not modifying the glow head? 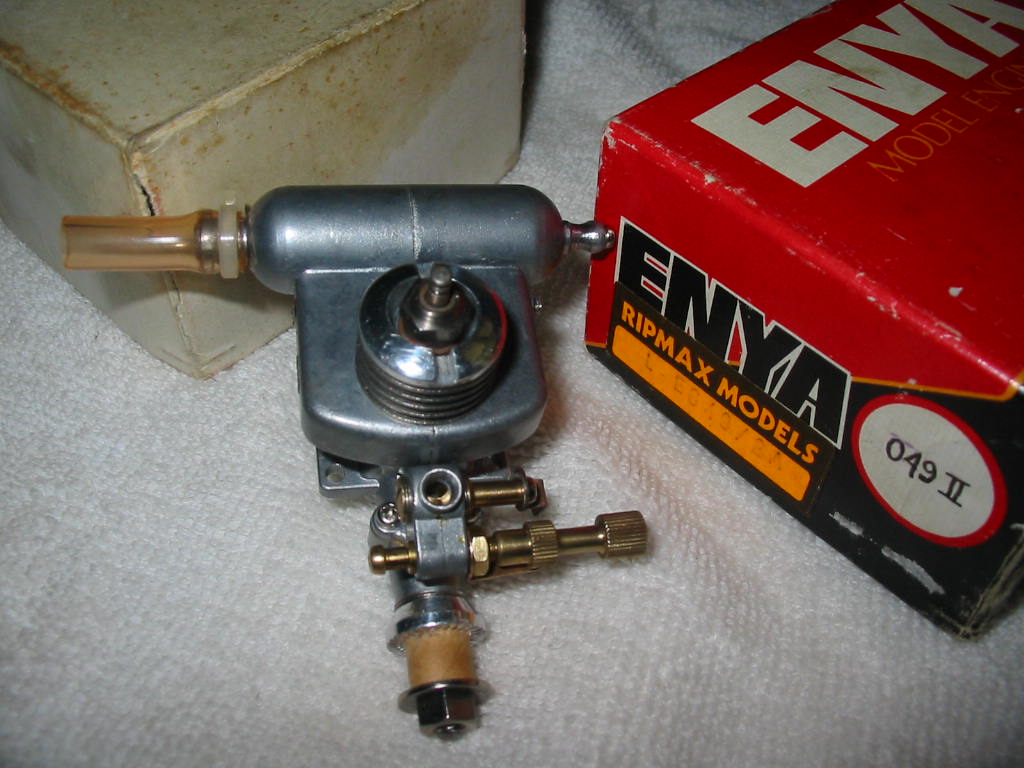 I strongly feel the power loss is due to the standard plug. Modifying the head is the simplest and easiest power gain without other modifications that may not be able to be returned to stock. I also feel that the overall design of the rod/gudgeon pin is not very desireable. If a failure is going to happen, it certainly seems as though that's where the failure will occur. The fact that the material now has been removed around the pin would be of a concern to me. I'm not a fan of anything that has more parts than required and this somewhat reminds me of the VA engine. The VA had a screw in landing that retained the rod but it too while being as modern as it is and the capability of turning 30K failed when not properly addressed. I personally wouldn't expect too much more performance from the Enya and it wasn't designed around the parameters to do so. The fact that it's made as many rpm's over stock is already impressive. I don't own any Enya .049's so I can only comment on what I see in your pictures but what I see in terms of performance is nothing more than most of combat flyers do. However, I think that most of it is snake oil as many of the similar mods I've done myself do little to nothing. I have completely polished cranks/cases smoothed transfer passages and seen no real rpm gains that were acceptable for all the work put it into it. The big problem with grinding is heat, when I see how much material has been removed around the crank pin it makes that area harder making it more susceptible to breaking.

Ramping the inside of the crank cutout with epoxy or J+B weld is something many of my flying buddies did not for fuel transfer but to prevent the crank from breaking. If you could obtain a additional head, or sacrifice one you have, using a Glo Bee, Merlin drop in would offer considerable rpm's over the stock setup. Both now long out of production are a bit more difficult to obtain however these could be turned down if needed and the glow plug hole drilled out to be used as a head clamp.

Also not being familiar with Enya, it looks like one sub piston is inverted? Or does it not matter?

Also not being familiar with Enya, it looks like one sub piston is inverted? Or does it not matter?

Greg,
If you read it again, the stock compression ratio is 8.0:1.
The modifications of the lower head and cylinder increased it to about 7.0:1
There is no sub piston induction when the piston reaches TDC. (stock or modified.)

The Piston on an Enya is a 4 piece piston.
This is a photo of a Enya .06 engine's piston.
Enya does a rough removal of material on the connecting rod to clear the piston skirt (because it's so long -- piston)
When reassembling the piston you have to remember to have that part of the con rod up inside,
or you'll be having to un-assemble the piston assemble to correct that mistake. (I know!)

Another thing to really watch out for is how you install the sub-piston (sleeve).
One side has a radius which goes to the face inside the piston.
The other has a sharp corner which the snap ring clips to this face.
If you have it backwards, then you really have a two problems.
1.) There is slop in the assembly ( like a Cox ball joint that needs to be reset -- Badly!)
2.) Trying to now remove the snap ring is almost impossible as it spins and slip around in the groove and chamfer.
I did this one time and it took me hours to finally remove the snap ring (also lost said snap ring) on removal! 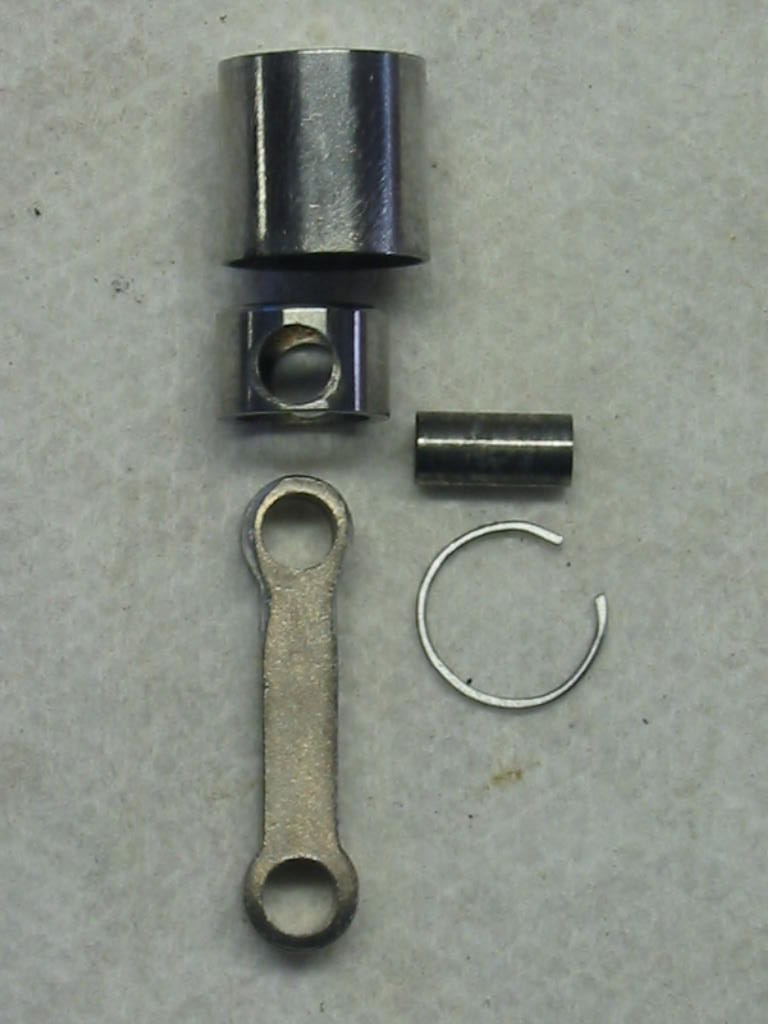 The next two photos are of an Enya .049 engine's piston.
No material removal on the con rod on the Enya .049 here. 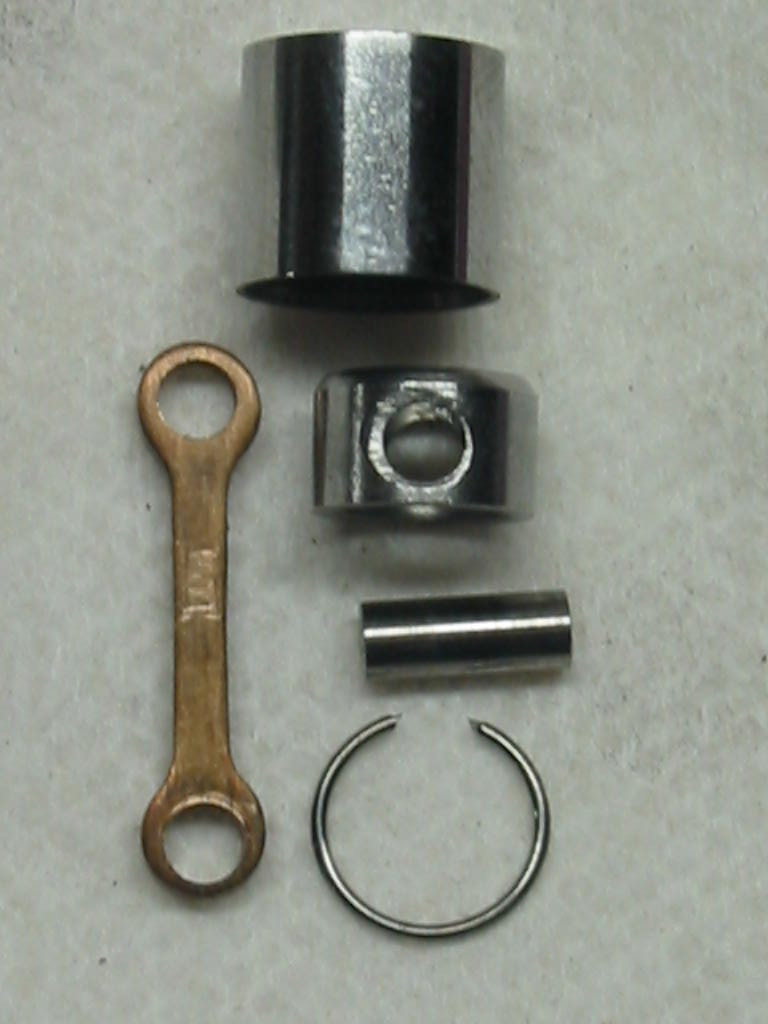 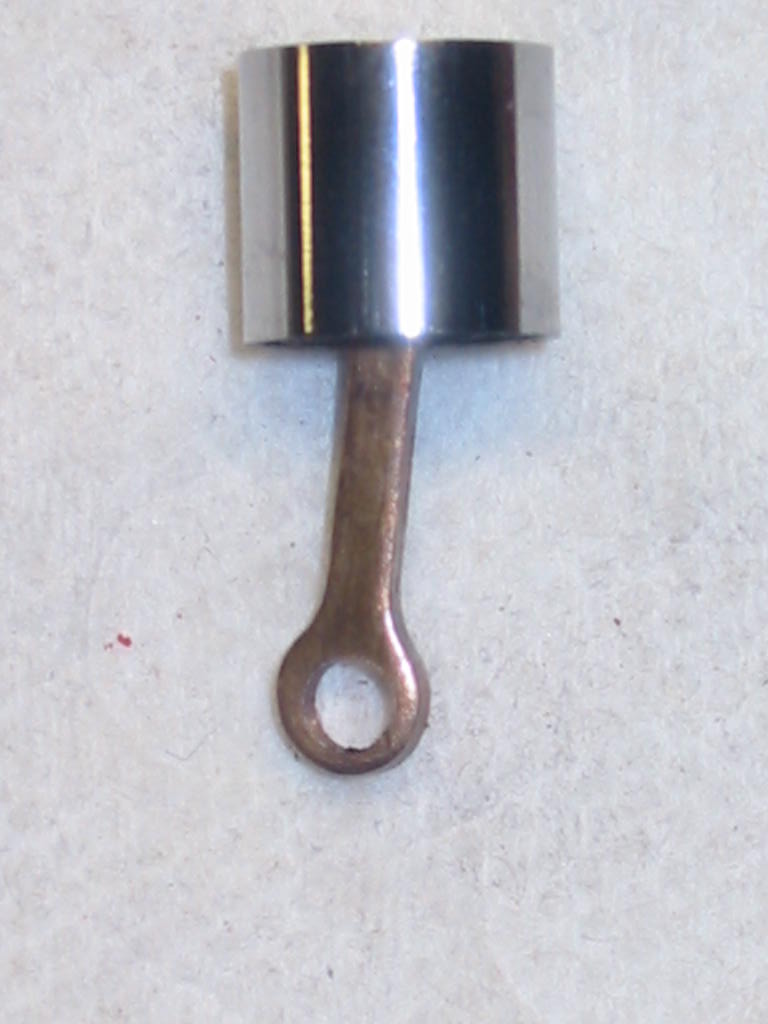 I must be misfiring on a few cylinders. How is 7:1 greater than the original 8:1?

The assembly of the rod/piston was evident in the first post. Which is why I questioned if one sub piston was inverted. Clearly the radius is toward the crown in the "modified" assembly and toward the skirt in the "original".

He probably meant to say decreased to 7.0:1

Most of the compression reduction seems to come from the hemi milling of the head button. Some increase in compression was put back in when the cylinder was lowered to align the ports.

Most of the compression reduction seems to come from the hemi milling of the head button. Some increase in compression was put back in when the cylinder was lowered to align the ports.

The compression was actually increased up almost 9.0:1 from the stock factory 8.0:1
I contacted Ian (in England) and he straightened me out.
I asked him what it was that his mods. did to the compression ratio.

When you compare where the Cox piston is at when it is at top dead center, it is just below the glow head by a few thousandth of an inch.
On the Enya engines there is about 3mm (.12") below the glow plug when at TDC.

Both engines are designed to where the glow heads stop at a shoulder at the top o the cylinder head.
That is where I got the measurements from. And you can add shims to the Cox cylinder to make the piston even with the shoulder of the piston cylinder (port timing).
The Enya engines are way too far from making that happen.
Though Enya does have a cylinder shim to reduce the compression ratio. 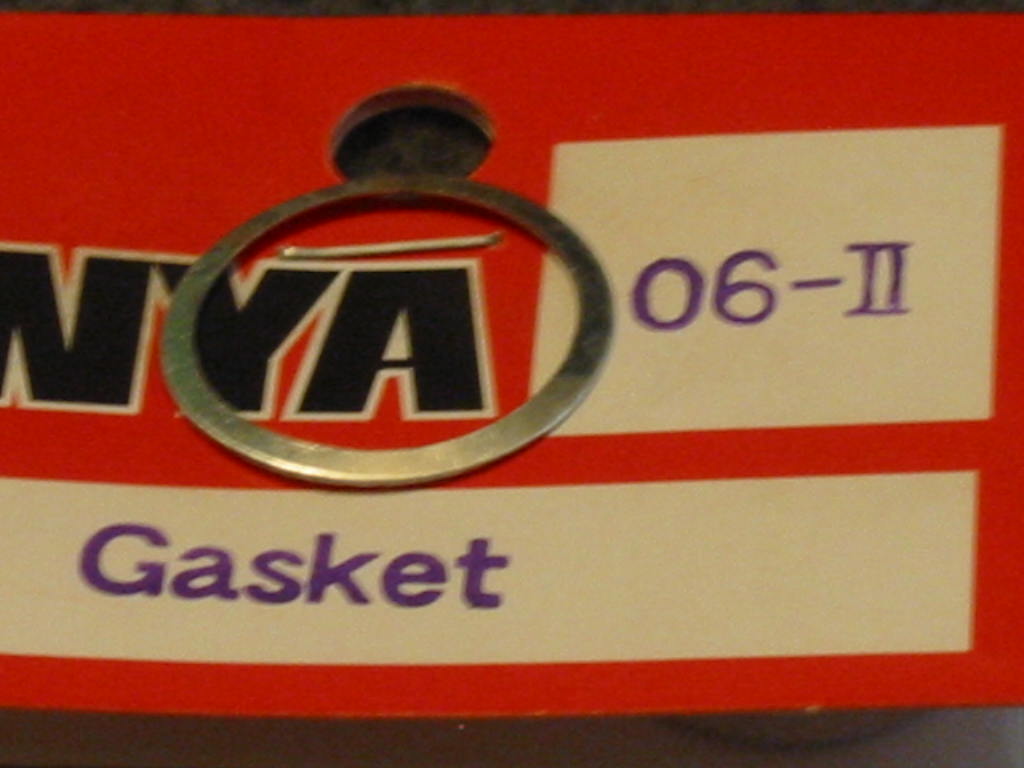 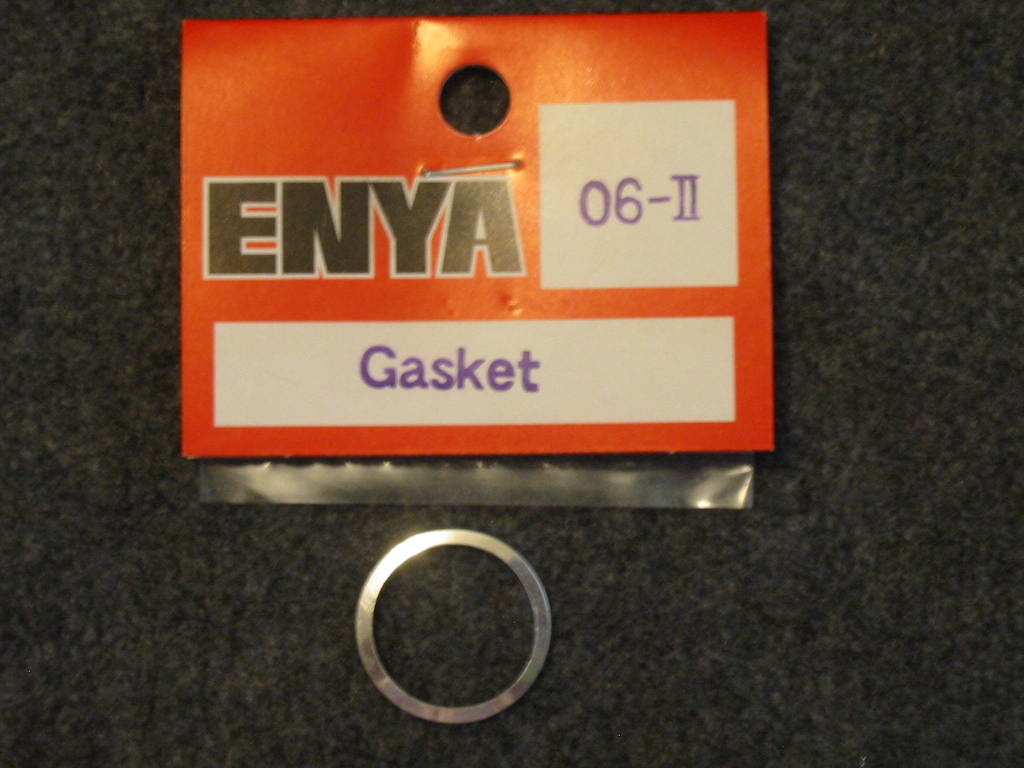 The head shim is .030 thick and made of aluminum.

Lot of difference in what area is being ignited?
The Cox has very little area but the Enya has a lot more area.

If you could check or if some one knows what the compression ratio is for a Cox, you'll see it has a higher ratio than the Enya engine.