This is the proper head color for a Fox .35. 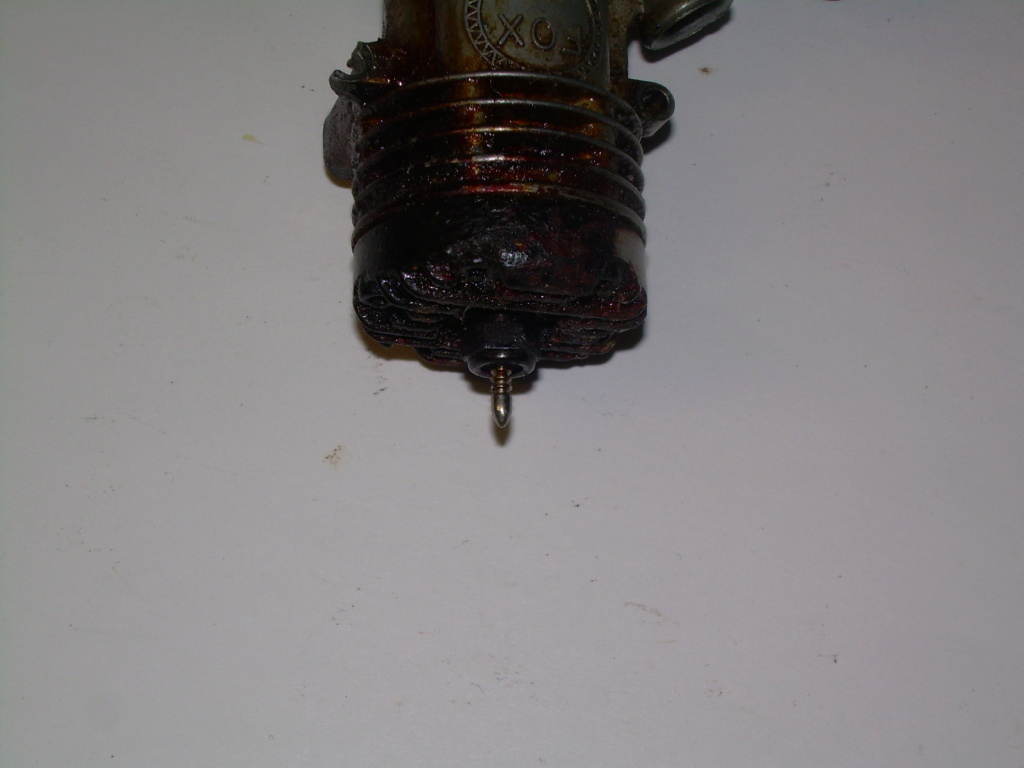 @Ken Cook wrote:This is the proper head color for a Fox .35.

No hangar queen there.

my Stallion 35 running on test bench

The Stallion is a tough engine to find a plane for. It's weight being about 8.7 ounces makes it difficult for some choices. In addition, the run of the Stallion is unlike the competition of the time. It wants to run fast which is great for sport but can prove to be a bit of challenge with some planes. It suits better for short nosed planes such as a Flite Streak. While it would work on profiles such as Ringmasters and the likes, it's weight is a handicap. Most of these profiles already are designed on the premise of being nose heavy with lighter engines. I used to fly the Stallion on the Midwest 48" warbird series, while it wasn't the best it worked and it was good fun. Not exactly the quietest engine. Unfortunately, muffling this one is not a good recommendation. It will muffle it but it could also overheat it and in short order. One just needs to opt towards the richer side if done so and not let it get into a burn down run.

I've posted many points pros and cons on this engine over the past few years. I only see them run on a stand and never on a plane. The Stallion while it was intended to undermine the competition. It was never sold at or lower than the competition. My dad purchased his in "69". The box which I still have was marked $12.95 originally and scratched out with $11.95 as the final price. AHC hobby shop in New York  was offering the engine at $9.95 in and around this year but you had to purchase the kit they were offering with it.

Used with the correct fuel, keep the nitro at 10% and common sense, the engine will last a long time. In my opinion it would outlast a Mccoy redhead. I've witnessed the redhead wear itself out on one run right before my eyes. Neat engine, get it on a plane.

That's too bad. It looks like somebody just sand blasted the outside of that Stallion just to sell it.

I'm still kicking myself for parting with a Ringmaster that I believe had a Stallion on it. It was in great shape too, ready to fly. Hind sight is 20 20. I'm an R/C guy though and you know, deals come up.

As I mentioned, the Stallion even today is a inexpensive cheap engine. There was one a new one on Stunthangar last year that was NIB for $40 and no takers. They can be had for little money. The problem is finding one that hasn't been used too much or abused. The wrist pin is a full floating pin which is hard drill rod. It has no end pad bushings be it brass or nylon. First thing I do with these is insure the wrist pin is radiused and polished. When the wrist pin scores the insides of the cylinder, bye bye compression. If your a returnee to the hobby, living the past isn't the way to go about it. Obtain a OS .25 FP or LA .25 which will offer more power over that Stallion and will do it on less fuel, less mess, less fussing around with and it will be quieter as well.

@Ken Cook wrote: Neat engine, get it on a plane.

good advice - and yes - i am trying to figure out which plane I wanna put it on. Renovated/restorated a Ringmaster, but I agree, wrong motor...